Yes, it’s the time of year again where I list the 5 board games that I think were the best in 2021. The games don’t necessarily have to have been published this year, but as long as I have played them in 2021, they qualify to appear on this list. Of course, as is now custom on the Tabletop Games Blog, the #1 game will receive the exclusive and prestigious Top Table Award. I know you’re already at the edge of your seat to find out who got the coveted trophy, but let me list the top 5 board games of 2021 in reverse order, to raise the excitement even further and make you wait a little bit longer. 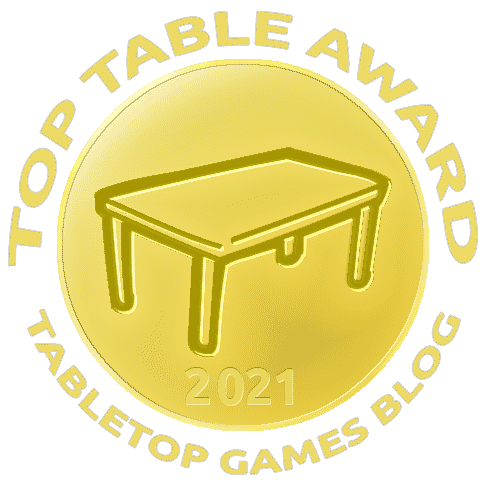 Genotype by John Coveyou, Paul Salomon and Ian Zang from Genius Games is a really lovely game, that will keep your brain cells just occupied enough, without giving you a headache. It’s also a very competitive game, which I guess is emulating the life-and-death situations faced daily in nature. Mind you, the game isn’t about animals, but about plants: pea plants to be more precise. Even though plants do also fight deadly battles, be it on much longer timescales, Genotype is really about genetics and chromosomes.

At least, that’s the theme of the game, but in reality, you’re placing workers, in the shape of little trowels, onto action spaces. You try and fulfil contracts and ensure you get the right resources, which are chromosome dice and money, you need to do so or to buy cards that allow you to become more efficient.

It does sound a bit cold, but then Genotype is really quite high on player interaction. It’s an almost traditional worker placement game, where action slots can only be occupied by a single player. There are a handful of spaces that can be used by several people, but you usually have to pay extra if you go there after other players.

As I alluded to at the beginning of the article, Genotype is almost more about the survival of the fittest than growing lovely pea plants. Yet, that’s what makes this game so much fun and interesting. Just be aware of the cut-throat nature of this game going in and you’ll have a lot of enjoyable hours playing it.

Luzon Rails by Robin David was a really pleasant surprise, for a number of reasons. I always wanted to try a cube rail game and Luzon Rails promised to give people new to this genre an easy way in – and that is very true. I taught it to my wife and I also taught it to my games group and they all loved it. The teach is relatively easy and the gameplay is not too hard.

The wonderful thing about cube rail games is the fact that nobody owns any of the train companies, but as long as you own shares in one, you can build track and use the company’s money as you see fit on your turn. That’s a concept that was new to all of us, but that’s also what made the game so exciting and enjoyable for everyone. The idea that your own money is separate from the train companies’ money took a little while to get used to, but that’s the core of cube rail games of course.

So, being able to jump onto the success of another player and buy shares in the company that they spent energy building up, is very satisfying, but of course, there is also the flip side of this, where someone buys a single share in a company, just with the intention to run it into the ground and build track that leads into nowhere, while emptying the company’s coffers and making it impossible for its share price to go any higher.

The amount of direct player interaction is increased in the bidding phase, where everyone intentionally bids in such a way to make it impossible for others to outbid them, because how much everyone has is open information. Yet, player interaction is not really all about outdoing the other players, because you don’t want them to go against you and run your train company into the ground. It’s a fine balance that makes for a really interesting game.

I’ve not played The King is Dead by Peer Sylvester from Osprey Games a lot, but every game was really enthralling. It’s such a simple game to explain, but so deep and excruciatingly mind-burning to play. The order of play is really simple: either play a card from your hand to change the influence of one of three factions in two regions of the map – or pass. Yet, each turn is blighted with tough decisions, because sometimes it’s best to step back and let the other players fight it out amongst themselves, so you can swoop in at the end and control the rest of the game. Other times, you need to control the situation right away, even though you risk losing all influence later on.

A lot of bluffing comes into it as well and you need to keep a close eye on the other players, checking how many cards they have left and what types of followers they have amassed. If you lose sight of things for even a single turn, it can all end in tears.

There isn’t really much more to say about this game, because The King is Dead needs to be experienced. It’s so hard to put into words the impossible decisions you have to make and the gambles you have to take. One moment you think you have full control of what’s going on and this round seems to be going exactly your way, when another player just pushes one last time and changes the board so much that it bears no resemblance to your plans.

It was a tough battle between Sleeping Gods by Ryan Laukat from Red Raven Games and the #1 slot in this list. They both are very good at drawing players into a world and engrossing them for an hour or two. They are both also played over several sessions and are set in a fantasy world full of adventure and excitement. The illustrations in both games are amazing and highly detailed and both games’ components are really high quality. So deciding which one should go in #2 and which is #1 was impossibly hard, but I had to make a decision.

So, just because Sleeping Gods didn’t end up in the top slot, it’s still a really great game. Also, it is cooperative, while the #1 game is competitive, which means they are both aimed at different groups of players, so you may feel it is the better game for you. In fact, if I had to choose the best family game of 2021, then Sleeping Gods would have won by a mile.

The number of hours my wife, daughter and I played the game is in the dozens. We also played it over and over again, starting a new campaign to see if would beat the game this time. After all, it’s cooperative, so your aim is to beat the game and that’s not easy. However, as you play Sleeping Gods, you have very little idea as to how well you’re doing or if you’re going to win or lose – at least not the first time you play the game.

That’s what’s so nice about this game. Unlike many other cooperative games, where you can see the situation getting progressively worse, or better, in Sleeping Gods, you just plod along, explore the world, fight monsters, help people, buy goods and generally just travel around. You take notes of where you’ve been and what you encountered and as you make decisions and take actions, the world around you changes. It all feels almost really relaxed, wasn’t it for the fact that you’re always keeping an eye on how exhausted or wounded your crew is.

I know, people wonder whether you can actually play Sleeping Gods several times, given that you take notes and probably remember what you did in a previous game. The thing is, not only can you play it several times, you must do so, if you want to eventually beat the game and win. You do so much in a single game that it’s impossible to remember everything, unless you take really detailed notes, but even then, the adventures are so far spread over the map that it’s impossible to keep track of everything.

The world is also so very large that, even if you’ve eventually memorized certain sections of the map, you can simply go somewhere else and explore new regions and go on new adventures. You will never have enough time to see everything in a single game.

So, I can guarantee you, you are able to replay Sleeping Gods multiple times and I bet you actually can’t wait to do so once you finished your first game.

#1 – Oath: Chronicles of Empire and Exile

If you’ve been following the blog for a while, you may have guessed that Oath by Cole Wehrle from Leder Games would take the Top Table Award. I reviewed it three times this year, in its various forms, and it featured in a number of other articles on the blog, most recently in the 5 Heavy Christmas Board Games Saturday Review. It has captured my and my games group’s imagination the most and is the sort of game that we spent a lot of time learning and playing. In fact, we’re already three games into a campaign that is starting to really show off the game to its best.

As I have said repeatedly, the relative simplicity of having seven site cards, each with a number of denizen cards, is amazing, because it creates such a detailed and complex world. The fact that this world constantly changes as players take their turns and that part of it survives into the next game, is really clever and awe-inspiring.

The art from Kyle Ferrin is so beautiful and engrossing. It brings the world even more to life and you just want to keep looking at all the cards in more detail. There is so much to see and so much to discover. Add to that the fact that the game components are really high quality, which I finally had the pleasure to see for myself recently when my games group was able to meet in person again, and you have a game that is just wonderful in every way.

Here is a game that creates the feeling of a role-playing game, while being very much a more traditional board game where hand and resource management plays a big role. Yet, it’s also not really a traditional board game, because even though it’s not asymmetric as such, players do end up in different situations which gives them a different role as the game progresses. It’s also wonderful for the need for players to work together to stop another from winning, just for them to backstab each other on their next turn.

Oath is just glorious and very much deserves the Tabletop Games Blog Top Table Award for 2021. Congratulations! I can’t wait to play again.