It was going to be a tough project. The local geography wasn’t on our side: mountains, pine forests, rainforests and a number of rivers. However, there were also many plains that would make it easier for us to lay tracks. Whichever way you looked at it, it was going to be a huge undertaking, but the economical benefits were even bigger and many investors were ready to put their money into the stocks of Luzon Rails by Robin David. 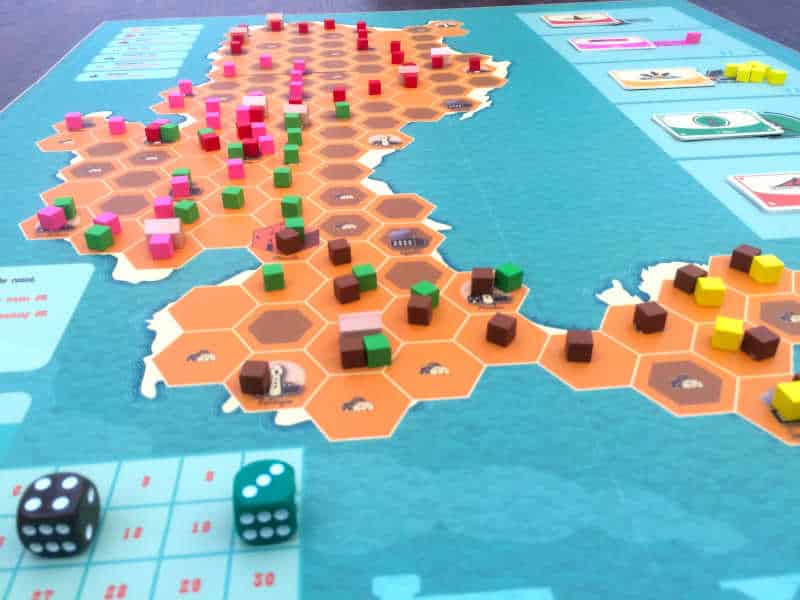 Here is the first cube rail game I’ve ever played and I was very excited to back this game on Kickstarter and couldn’t wait to play it when it finally arrived. I was previously put off by the image that rail games are difficult to learn and difficult to play, requiring a good head for maths. It’s an image that 18xx games tend to have, but Luzon Rails is different.

Its ruleset is really pretty straightforward, making it really easy to teach and learn. It’s the sort of game that you need to play a lot to master. You get started really quickly, but with every game you adjust your strategy a little, try out something else and learn something new. If you play the game with the same people and you all learn together, you will constantly have to adapt your strategy to what other players have learned. Very quickly, a sort of metagame develops and that’s something really interesting for me.

The maths side of things isn’t a huge issue either. There is some division and rounding, multiplying and adding, but it’s really minimal and shouldn’t require the use of a calculator. A lot of the game is more about your gut feeling and trying to predict what other players have planned or might want to do. It’s almost more about bluffing than calculating stock prices and dividends.

In Luzon Rails, players can invest their money in shares of five different railway companies. They will then be able to lay track for the railways that they own shares in to reach industrial cities, ports, developed towns and eventually Manila itself. As different locations are connected to a railway, that company’s share price will go up. Ever so often, every company pays out dividends to their shareholders, which is based on the stock value divided by the number of shares that have been bought.

That all makes sense, but this isn’t your standard Euro game. It’s not like you build track for your railway. You build track for a railway you own shares in, which is different, because other players may also own shares in the same railway as you and they may even own more shares than you. So by increasing the stock value of that company, you increase the value of everyone’s shares and if someone has more shares than you, they benefit more.

Also, you don’t spend your money to lay track, but the railway company’s money and the only money a railways company gets is from share issues, government grants and connecting to developed towns. So when you bid on shares, you’re encouraged to bid high, so that the railway company has plenty of money to build track, which will allow it to increase its share price.

So, as you can probably tell, there are a lot of things you need to consider and balance. Investing a lot of money in shares means the companies have more potential to increase their stock value, which will give you a return on your investment. However, if someone else also owns shares in the same company, you may be less inclined to try and push up the stock value for them. In fact, it is possible to intentionally use up the limited amount of tracks available to each company to run a line into the middle of nowhere, therefore giving other players less opportunity to drive up the stock price for that railway.

Buying shares itself is also very interesting. It’s all done via auctions, with the active player setting the starting bid. Once you pass, you’re out of that auction. Auctions are multi-faceted. You might literally just want to jump onto the bandwagon and try and buy a share in the railway company that has the highest stock value. Of course, the current owner will not want you to do that, so they will try and outbid you. However, you might also pretend that you’re interested in that company, when in fact you’re just trying to get another player to pay a lot of money from their coffers, so they don’t have enough left to bid on the company that you put up for auction in your next turn, because that’s the company you really wanted to invest in. The problem is, the other player may realize that and leave you hanging with the highest bid, forcing you to pay over the odds.

So, there is a lot of player interaction in Luzon Rails, but it’s not just as simple as a take-that – it’s more of a take-that-but-that-hurts-me-too-but-hopefully-not-as-much-as-it-hurts-you. It’s about bluffing, looking at what everyone else is doing, a bit of table talk and generally all the sort of things I like in these kind of games.

The rest of the game is what is called an open, or perfect, information game. Everything is there in front of you. You can see how much money everyone has, how many shares, how much track each company has left, what actions are available and everything else. The only thing you can’t see are the action cards players have in their hands – which leads me to explaining about action cards.

Each round, seven action cards are dealt out openly and at the beginning of the game, as well as after every two rounds, players draw up to two action cards into their hand, which they keep secret. On your turn, you either play an action card from your hand or one of the seven open ones and then carry out the action. Actions are laying track, developing a town on the map, auctioning shares or giving a government grant to one of the railway companies. Depending on what cards are available, a round can play quite differently.

Yet, as most cards are visible, you can plan pretty well in advance. In fact, you could probably math out every turn and work out how much to bid for a share in every auction. However, the cards in hand and the fact that you can only see one round’s cards mean that you can’t plan fully. There is still an element of surprise, on top of the surprises that players themselves create when they decide to do something that nobody expected.

Luzon Rails is a very dynamic game. There is definitely an overall strategy that you follow, but tactics come into it a lot as well. There are even going to be alliances, where two of you try to bid up a third player during an auction, just so they don’t have enough money left to bid on the company both of you are interested in. Yet, alliances are going to be fleeting, because everyone wants to make the most money out of the shares they own.

The game is not set in any particular time period, but it merely uses the geography of Luzon as a way to present a challenge for players to lay track and increase the share prices of the rail companies they’re invested in. However, I would like to give you a brief historic overview, so you can put things into context. Luzon is an island that sits at the northern end of the Philippines in the Pacific Ocean. It was occupied by many different countries over its lifetime1. China instituted a governor in the 1400s, some parts of the island became a Sultanate of Brunei soon after, the Spanish arrived in the 16th century and in World War II, the Americans stationed around 135,000 troops and 227 aircraft on the island, which was then captured by Japan in 1942. After the war, the Philippines gained independence and Luzon became the most developed island there under the rule of the dictator Ferdinand Marcos.

Luzon has had a railway since 18922 and the network reached its height in the 1950s and 60s, with lines stretching from San Fernando in the north to Legazpi in the south, mostly running along the western edge of the island. At that time, the railway enjoyed thousands of travellers a day and had an expansive commuter rail network in and out of Manila. However, in the 1970s, the railway system started to fall into decline as investment was diverted into the island’s road network. In recent years, a renewed effort is made to reinstate some of the lines and reinvest in the railway network.

Luzon Rails feels like a great way to venture into the genre of “cube rail” games – and maybe it will take you, and me, into the realms of 18xx one day. However, do expect to play it a lot to really master it. It’s the sort of game that you will want to play again and again, because it will be different every time.