The country was divided again. The Scottish were biding their time in the North, the Welsh were ready to pounce from the West, while the English tried to show some sort of semblance of the controlling power in the rest of the British Isles. At the same time, foreign countries were keeping a keen eye on the developing situation, ready to take advantage of the chaos that was about to ensue. It was up to us to marshal our troops and exert our influence, trying to ensure that the resulting dominant power that would eventually claim the throne was in our favour – and all of this only happened, because The King is Dead by Osprey Games. 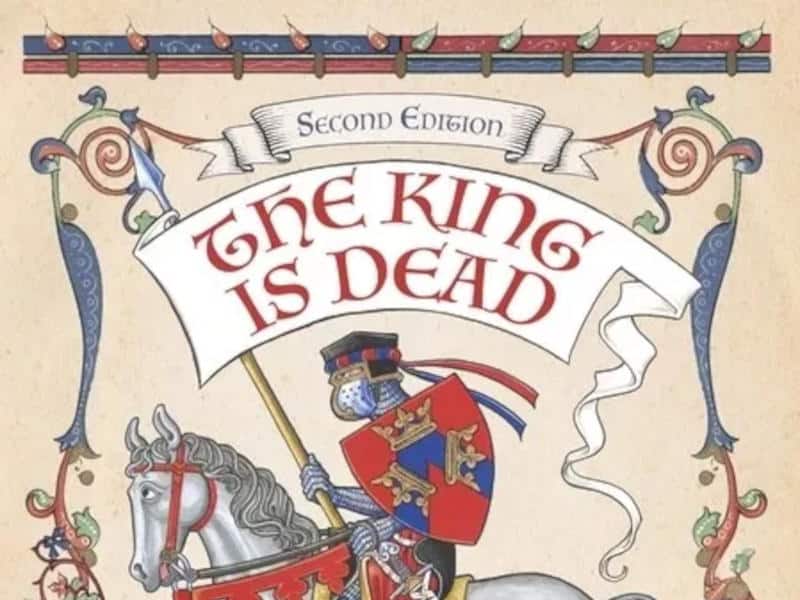 Let me start by saying that I only ever played the digital version of The King is Dead (2nd Edition), so I can’t attest to the component quality or the tactile feel of the game. Yet, I don’t think the quality of the components will hugely affect the enjoyment of the game, because it’s much more about strategy, tactics and trying to bluff and surprise other players with your own actions. It’s almost as if you play this game more in your head than on the table.

The setup for The King is Dead is pretty simple and the rules even more so. All you need to do on your turn is play a card from your hand to effect a change of influence in one or two regions of Britain, then take an influence marker, called follower cube in the game, off the board, thereby further exacting your influence. It’s really simple, but of course, it isn’t. The devil is, as so often, in the tactics.

The thing is, there really shouldn’t be any surprises. Everyone can see what faction, the Scots, Welsh or English, has what amount of influence in each of the regions. Also, every player starts with the same hand of cards, at least when you play with the base rules, so everyone knows exactly what everyone else’s possibilities are.

It’s very much like a game of chess, but one that can be played with more than two players. Everyone can see the games state and can work out what options everyone has. Everyone can plan ahead, evaluating what another player’s best or most likely action will be on their turn and how that will influence the board. Yet, just like in chess, playing contrary to what everyone else expects you to do can sometimes win you the game.

Also, the decision tree in The King is Dead gets rather large fairly quickly. So there really is only so much forward planning anyone can do in their head. At the same time, and as I alluded to at the beginning of this article, a lot of the time you spend playing this game is in your head. The thinking time hugely outweighs the time you spend placing your cards or moving cubes. Again, that’s very much like chess.

What makes The Kings is Dead so interesting for me, are the victory conditions. One of them is that, at the end of the game, the player who holds the most cubes of the faction that controls the most regions wins. To achieve that, everyone plays cards, all of which somehow change the number of follower cubes in the regions, thereby changing the influence of factions for those regions.

Your goal is for a certain faction to control that region when it comes to resolving one of the eight so-called power struggles. At that point, if that specific region has the most control cubes of a certain colour in it, they’re all removed and replaced with a control disc of the same colour, indicating that that faction now controls that region.

So it sounds like you should simply move the cubes around on the board so that your favoured colour is most represented in most of the regions. The problem is, you also need to remove a follower cube from the board every time after you play a card. So you’re actually reducing the influence of that faction on the board, but you want to have more cubes of that colour, because only the player with the most cubes at the end of the game for the faction with the most control wins the game.

So the more support you show for a faction, the less powerful that faction will become on the board, thereby reducing the chance of that faction controlling enough regions by the end of the game. It’s a real balancing act. You will want to take cubes of other colours as well, so that you don’t weaken your favourite faction too much.

Additionally, you don’t really want to show your plans too early. If you always go for the same colour cube, then the other players will know who you want to win at the end and will either also support the same faction in the hope that they have more cubes than you at the end of the game, or they will start to support a different faction and hope that one will control most regions when the game is over.

However, it is also possible to show your hand early, but actually bluff. After all, the more cubes of one colour that you remove from the board, the weaker that faction will become. As long as you can gain cubes of other colours in time, you may actually turn out victorious and have successfully lead the other players a merry dance.

There is another victory condition though. If, when a region is resolved in a power struggle, the number of cubes in that region are the same for at least two colours, then there is a tie and the region becomes unstable, resulting in control of a foreign power – and once three regions are controlled by a foreign power, the game ends immediately and a new victory condition is in force.

Now, the player who has a the most evenly balanced follower cubes in front of them wins, that is, you count up how many sets of the three colours every player can make with the cubes they have so far removed from the board and whoever can make the most sets wins.

It’s another viable strategy as well and allows someone who seems to be way behind in owning enough follower cubes of a specific colour to win, because they can try and get more sets than players who have put their eggs in one or maybe two baskets.

There is one more twist in The King is Dead that will influence your strategy. Every player gets only eight cards that have to last them the whole game. Players take turns playing a single card, carrying out the action, as much as that is possible and then taking a follower cube off the board. Alternatively, a player can pass and either join in again or keep passing. When all players have passed, one after the other, a power struggle happens and a region is resolved, which will result in a control disc to be placed, be it from a faction or a foreign power.

The trick is to choose your battles, or power struggles, and decide whether you want to play more cards at the beginning, running the risk of having no cards left at the end, or focus on the middle of the game, or maybe make sure you have most cards at the end so you can do what you want then. The problem is, some battles can sometimes be vital to two players who will force each other to play cards, therefore making it impossible to do much later in the game.

In fact, sometimes players intentionally play more cards to keep changing a region that is vital to another player, so that they have to play more cards, making them weaker later. So what cards you play when is important, but how many cards you play when even more so. Ending up without any cards at the end can be fine, but more often than not, it can also mean that someone else can wreak havoc on the board and take the victory for themselves.

So The King is Dead is a really deep, strategic game. You do need to plan ahead as much as possible, but there is also a lot of bluffing and forcing of hands. Be ready to change your plans halfway through the game, if things just aren’t going your way, or you will definitely be left behind. You are still in with a chance to turn things around and get the crown for yourself.