The Chancellor’s new reign had begun, as the Exiles had fled to the far reaches of the land. They had failed in their attempts to usurp the ruler, but here was another chance for them. They would muster their warbands, campaign against the Bandits, explore the world until eventually, they were strong enough to try again and finally succeed in overthrowing the leading power. Yet, they could never be sure if their fellow Exiles would deceive them and maybe even swear allegiance to the Chancellor, instead of staying strong and following the Exiles’ code of honour, sticking by the sacred Oath by Leder Games. 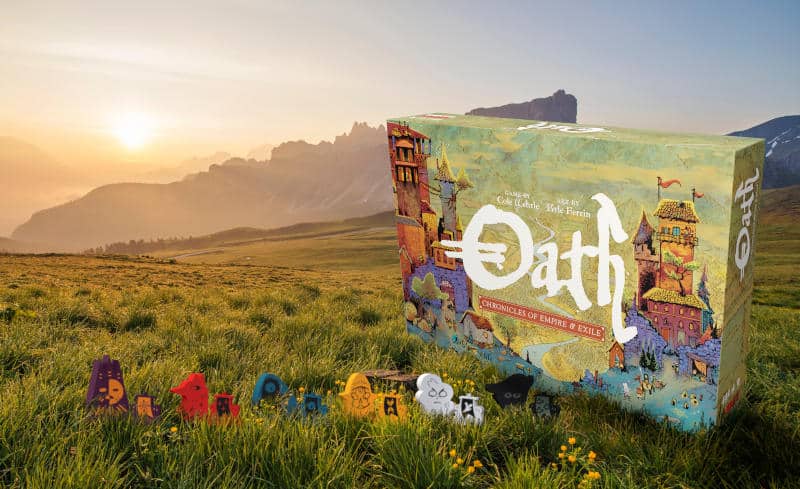 (Photo by Ales Krivec on Unsplash)

The game hasn’t been release yet, but I’m already writing a review. That’s only possible because the publisher released a Tabletop Simulator version of the game that I was able to play with my games group. I’m sure the game will be tweaked a little bit more before the official release, but it’s more or less finished, so any changes will be minor, which is why I think it’s all right to review the game in its current state.

Of course, I will only be able to speak about the gameplay experience in this article, as well as maybe the artwork, but because I’ve not seen the actual, physical components, I can’t talk about how these feel or how good they are, even though I can talk about how well the virtual components work – and this last point is quite important.

The reason is, that I’m really impressed with how few components there really are to build a world that feels like it has a lot of depth and subtleties. There are eight location cards, which make up the three regions of the world. These alone already create depth, as they will have certain benefits or disadvantages, which will have a direct impact on how you will interact with them – or if you’d rather avoid them.

Add to that a deck of cards that you can either use to give yourself abilities or that you play at a location so that everyone can use them. These “denizen” cards add more depth and interconnections to this world, which is really awe-inspiring to watch.

Yet, on the table, this very detailed world takes up very little space. It’s rather crazy, because if you’ve seen how the game looks on the table, you will think that the world of Oath is rather boring and bland, when in fact it’s really deep and what denizens you play where and what locations you try and control will have a huge impact on the game.

In fact, it does feel like every decision counts and the timing of your decisions count too. You have to think ahead and try and predict what the other players might be doing next, so you are prepared for it. After all, even in a three-player game, the world is very small and you are forced to attack other players or otherwise interact with them. There is no avoiding it. Actually, even if the world was much bigger, if you want to win, you do need to interfere with what other players are doing, making your proximity to your competition absolutely vital.

It sounds like Oath is very hard to master, and that’s certainly true. It’s also quite difficult to learn, at least from the materials available online at the moment. The final rulebook and guides may be different and may make learning to play the game easier. It also doesn’t help that the online game has things set up for you, so you miss out on learning the names of the components in the game and what they do.

Speaking of names, Oath does introduce quite a few terms that all have a specific meaning and it’s important that you learn those terms and understand them. Once you do, the game does start to flow actually quite well, but it did take me about three games before things fell into place and it was only during the fourth game that I felt I knew what I was doing.

At the same time though, when you play the game for the first time, it already feels like you have control over what’s happening and even though the flow is slow and you probably end up referring to the rulebook quite a few times, by the end of the game you do feel like you’ve achieved something, even if you didn’t win. You will have gotten a sense of what adventures might await you the next time you play Oath. You will certainly know, if the game is for you or not, but do give it some leeway, as it’s one of those games that will take a while to learn fully and even longer to master.

There is one thing though, that’s left me a bit deflated. I love playing as an Exile, where you have so many ways of winning, allowing you to try a wide range of different strategies or playing in a way that suits your style and giving you a feeling of satisfaction and achievement, even if it’s very hard to win.

However, as the Chancellor, I felt like I didn’t really do anything to deserve a victory. It ended up being decided on the roll of a dice that I won. All I did was survive long enough to continue my reign into the next game. I suppose, surviving six or more rounds is achievement enough, but for me, it didn’t provide any satisfaction and even though I enjoyed the game itself in the role of Chancellor, my victory just wasn’t deserved in my view.

There is one more thing that I’m not sure about and that’s the luck of the card draw. Another player and I both, and independently during two different games, noted that you really struggle to catch up with everyone else if you simply don’t draw denizen cards with suits matching the locations. The suits are important to gain favour, which is basically money, or secrets, which are the other currency in the game. If you don’t have matching suits, you will take a long time getting enough money to do anything meaningful in the game.

Saying that though, even when the suits didn’t match, we were still able to run grand campaigns and come close to winning. I guess, like in so many games, there are different ways to victory and you have to play according to what the game presents you with. If the card suits don’t go your way, you need to find a different way to win.

Yes, despite all my concerns, I really can’t wait to play Oath again, even if I do take on the role of the Chancellor again. I love how the world is different every time and how cleverly everything is linked together. I love how the outcome of one game influences the next, if you play through a campaign. I love how a relatively small setup creates such a deep, complex and wonderful world that you can explore. I love how you have so many different ways to victory. I just love Oath.