Progress was slow, but it was very satisfying seeing the little pea seedlings grow and then, eventually, flower before finally producing pods that slowly swelled up to bursting with new peas inside. We carefully crossed different plants in the hope that they would create new varieties and over time we were able to predict the height of the plant, its flower colour, the pod colour as well as whether the peas were smooth or wrinkly based on their parentage. We were finally ready to work out each plant’s Genotype by Genius Games. 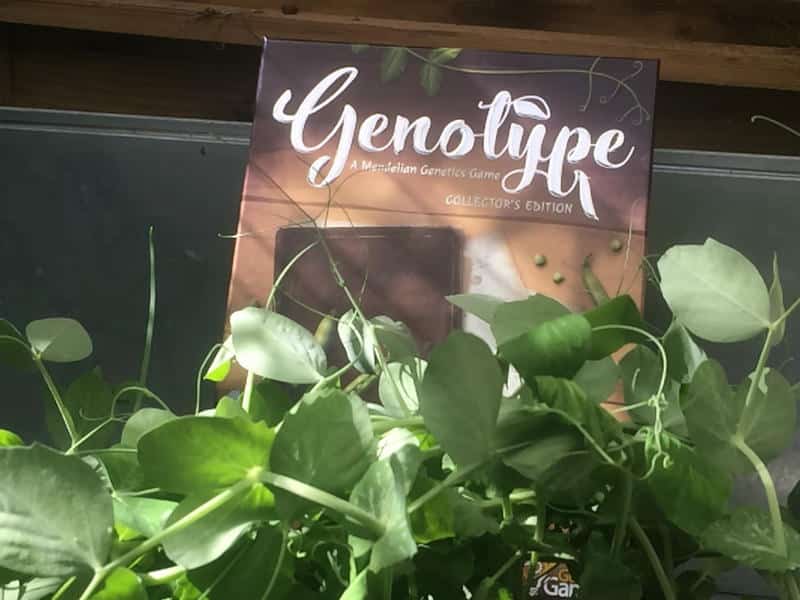 The theme is wonderful. It’s the first game I have come across that puts the science of genetics at its heart, using Gregor Mendel‘s famous experiments with pea plants as its setting. The game even comes with a 12-page A4 booklet that explains the science and how it is represented in the game. So you’re encouraged to read and learn more about how the observation of the pea plants’ visible characteristics and how their change in the plants’ offspring, lead Gregor to think about the possibility that there are underlying characteristics, that we now call genes.

There are a lot of things in the game that you probably recall from school biology and that you can recognize as you play, even if the mechanisms of dice rolling, worker placement, resource management and everything else do abstract the science that they represent.

Each round in the game consists of exactly the same three phases, which wonderfully emulate Mendel‘s work of sowing peas, waiting for them to grow, then carefully crossing only specific plants, waiting for their fertilized flowers to mature into pods, before starting the whole process all over again. Each round feels like a gardener’s year.

At the same time, you also feel the limitations that Mendel had to work around. You start with only two plots for planting and only one plant to grow. There are also only five rounds in Genotype and to start with you only have three actions you can carry out per round. So you have to really make sure that every decision you make is the right one.

Of course, like in nature, there is also a lot of randomness. You are at the mercy of the pea plant cards available and they are cleared out and reset each round, so if you don’t grab the plant you need there and then, you won’t see it again. There are also dice in this game, which decide what traits on a plant in your plots you can cover up, which is the main aim in the game, because once you have covered up all traits, you score that card’s points.

However, none of the randomness feels like it’s taking over the gameplay. It feels more like the randomness in nature: you have to work with it and not against it. The randomness never really breaks your plans, but is more there to delay you and force you to think of alternative ways of achieving what you need – and there is usually another way of getting what you’re after.

Overall, Genotype is a lot more about tactics than an overall strategy, not only because of the changing cards available to you and the dice, but also because action spaces are mostly limited to one player or if they’re not limited, they get more expensive if you’re not the first to go there. So you are constantly forced to decide what to do first and what can wait until later.

At the same time though, there are a lot of action spaces to choose from. So the worker placement element in Genotype rarely stops you from being able to do what you need to do, but is more likely to delay you and force you to select a different option. Hence, it’s about tactics more than strategy, as I said – and it’s not really that high on player interaction for the same reason.

Despite all of these pressures of deciding what to do when, finding solutions to the problems the game presents to you and the player interaction that the worker placement slots create, Genotype actually feels quite gentle and slow. Each round you try and make your life a little easier, by adding more plots, hiring assistants or getting more actions, but there is no glasshouse or artificial light that allow you to go through generations of peas more quickly. There is no mechanisation either. So even though you get better at the process each round, it still feels like a manual process, just like it would have felt to Mendel.

I just wanted to point that out, because the game is a sort of engine builder, but the engine never really gets to run at peak performance – and even though this can seem like a bad thing, it’s actually very fitting for the setting. I actually think it’s wonderful that you don’t progress very much during the game, but then I’m a keen gardener and I know how much work you put into your garden or allotment each year and how little really improves. As a gardener, I enjoy the journey and cherish our harvest or the colourful blooms or their heavenly scent.

At the same time, I can see how it can be frustrating to someone who wants to build an engine and see it running at peak performance, at least for one round. So, don’t be disappointed when Genotype doesn’t deliver that. It stays true to its setting yet again.

Genotype plays relatively quickly, because of the round limitation and despite there being so many different options on your turn, you tend to decide what you want to do without too much thinking time. So, if you’re looking for a game that you can play as a family and that does a good job of teaching you about the beginnings of genetics, then I can highly recommend Genotype to you.