As the Chancellor, I had the people on my side. The Empire was going to thrive and grow and be beautiful. Yet, there were rumours of Exiles stirring in the Provinces and Hinterland, trying their best to claw back control. They were two visionaries, one stomping through the regions, using brute force to exert their influence and letting the wolves lose on anyone who would get in their way, while the other was biding their time in the Salt Flats, enlisting the help of witches and unnatural powers, trying to glean secrets and waiting for the right moment to strike. Both were intent on taking over the Empire, because they both had sworn an Oath by Cole Wehrle from Leder Games. 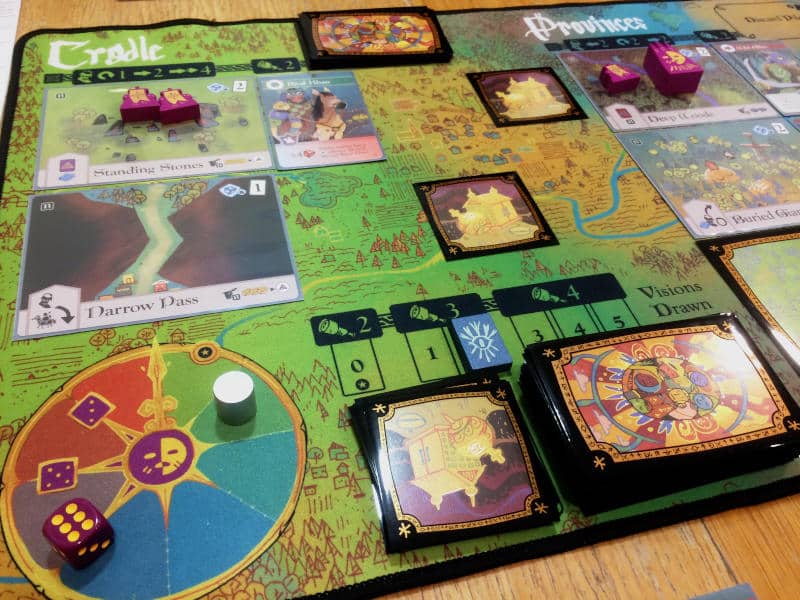 I previously reviewed Oath, see the links below, but so far I only ever played it in digital form. I also only ever played a single chronicle, resetting everything to the beginning every time we played it. So when I was finally able to meet my games group in person again, we decided that it was time to change all that.

A friend of mine had backed Oath on Kickstarter, but we were never able to play it because of the pandemic. Seeing the components for the first time was amazing. The neoprene game board is gorgeous. The metal favour coins don’t only have a nice weight and are decorated with wonderful designs, but they’re also practical and designed to stack easily, without toppling over. The player tokens, secrets and other wooden components are chunky and screen-printed to give them a luxurious feel. The player boards are super thick and the card stock as wonderful. The Kickstarter edition also came with card sleeves, which have a beautiful design on the back, but only along the edge, so you can still see the design of the back of the cards, which is especially crucial to know if you’re drawing a vision card from the world deck.

The game does take up quite a lot of space on the table, but it does deserve it. It all looks very impressive and it feels great to reach across to place your warbands onto a site or to add denizens. It’s such a luxurious feeling game that it would be a shame if it had been much smaller. The feeling of exploring this world would have been lost.

I’m always amazed by how much depth there is in the world of Oath, despite it basically consisting of eight site cards, randomly chosen from a deck of 23 cards. Those alone can create interesting landscapes, where a Narrow Pass can create a natural barrier for a region, for example, or where the Charming Valley is a place where “you can check out any time you like, but you can never leave,” as the song lyrics to Hotel California seemed to predict.

You could argue that the region cards alone don’t create enough variability, but of course, each site is further changed as denizen cards are played. Placing the Wayside Inn in the Charming Valley can change things quite a bit, for example, and there are so many cards in the game, that you will always see something new, allowing to adjust the world and bend it to your will.

Having played Oath quite a few times now, be it from the start each time, playing the physical copy was much the same. In fact, I felt it was much easier to pick up a card and read its text than is possible in the digital implementation I have played. However, setting up the game takes a lot longer, even though I think we’ll get faster, the more we play it. That’s especially true, because we decided to set everything up for the next chronicle when we finished our game. That process did feel a bit long, but again, we’ll get quicker the more we do it and now that we “saved” the game, it’ll be quicker to set up next time.

I’m really looking forward to continuing into the next chapter when we play next and run a little campaign. Even though Oath calls them chronicles, it is almost like a campaign game, but more in the sense of a role-playing campaign, than a board game one. Overall, Oath is very much about the story you, as the players, weave and even though you all compete and end up making pacts one round and break them the next, continually backstabbing each other and doing everything you can to win the game, the story actually feels more important than winning.

The names of sites and denizen cards, the illustrations and the way Oath is designed, is all about stories. It makes it easy to imagine what is going on in this world when one player helps another player get the favour they need to retrieve the Banner of the People’s Favor, so that the third player can’t win on their next turn. They may have the Secret Signal adviser, allowing them to gain two favour coins if they would otherwise only get one and if the second player gives them Cup of Plenty in return for the favours they need to retrieve the banner, both players will benefit and they will have created an amazing moment in the story arc that Oath creates.

These pacts that players might form to prevent another from winning are always only very short-lived, because as soon as one player’s victory has been prevented, one of the others is likely to be in a good position to win. Suddenly, the player whose victory was blocked will work together with one of the players who stopped them from winning, just so that player three can’t win on their turn.

Yet, it never feels like backstabbing. Even people who hate direct, negative player interaction will see that there is no point in them just focussing on their own victory, if the game will never come back round to them and someone else will win before them. It’s clear that that player needs to be stopped at all costs and you may have to work together to make it happen.

Depending on the situation, you might be able to stop another player from winning while also manoeuvring yourself into a winning position. You might even decide that you will do nothing about the other player’s likely victory, thereby forcing the next player’s hand and making them do the dirty work for you, even though that can also backfire.

The game will continue until someone does eventually win, either because the Chancellor rolls the right dice result or because of a player’s shrewd calculation and perfect timing or because the game has lasted for its full eight rounds and then it’s just a matter of using the tiebreaker.

I must say, I still feel the Chancellor winning because of a dice roll is a bit anti-climactic, but I do see that it creates a bit more uncertainty about when the game might end and chances are, the events leading up to that dice roll will have been exciting, if players have played properly and done their best to stop the Chancellor in time, of course.

So, yes, I still love Oath and I love it even more after having played the physical copy and been able to play with the wonderful components. The game gets extra special now that we’ve prepared for the next chronicle and I can’t wait to see where the story will take us next time.