Having played Oath by Leder Games a few more times since my review, I felt it was time to share with you what I have learned since and to see if my view of the game has changed in any way, which is why this article is under the Takebacks heading. There is a lot of ground to cover and for me to put the cards on the table so let’s begin. 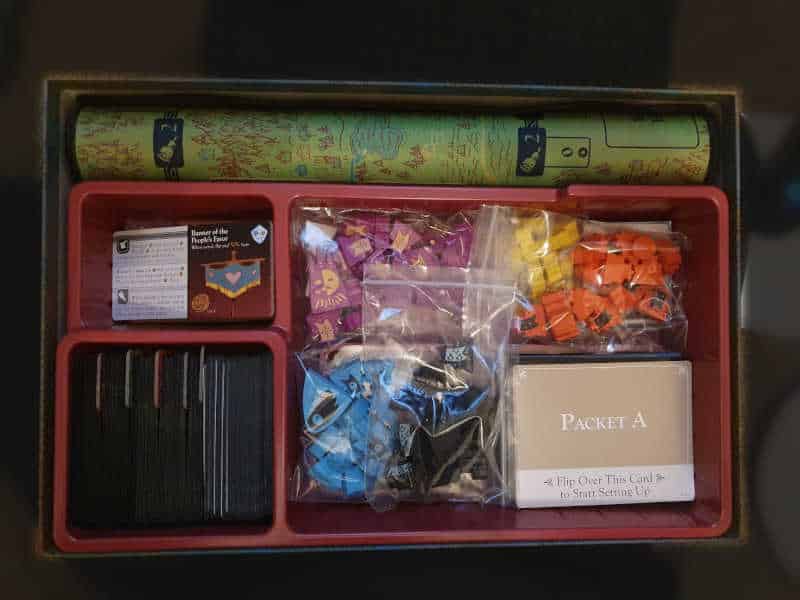 Every game of Oath is an adventure, not only of the world that the site cards create and the story that their locations relative to other site cards tell, but also an adventure of exploring the denizen deck and the relics. Oath is the sort of game you need to play many times and not only that, but you want to keep playing it regularly, maybe once a week or more often, or you will always start from the begining again and not really get a feel for it all.

The game is a bit like a deck builder, in that you need to know what cards are potentially available and how they can help you with your strategy – or rather the other way around, what strategy you should choose based on the cards available. It goes much further than that though, because you’re not actually building your own deck, but everyone works from a shared deck that’s split across four sites – except for the assistants that only you have access to, of course.

More often than not, the decision is not so much about what card will work best for you, but what card you can definitely not let someone else have. The decision is also about what cards you can discard and hope to grab later, after burying them a little bit deeper in the adjacent region’s discard pile. You really do have to keep a poker face to make sure the other players don’t jump onto the cards that you just discarded, if you don’t want them to have it – or maybe do a bit of bluffing and entice others to draw cards that are actually no good to them.

Then there are the sites to consider as well. Some locations are ideal hiding places where you can hole yourself up and make it almost impossible for anyone else to reach you – or if they can reach you, they will find it very hard to attack you successfully. However, sometimes you can’t afford to stay in one place and you’re better off travelling around the map, reveal new sites and maybe pick up relics along the way. In that case, you won’t like those sites that make travelling harder and maybe you end up hanging around the coast a bit more, so you can travel more quickly across the map.

It is amazing how much of an influence cards have in Oath. The denizens, the sites and even the relics and banners, which are technically tiles, not cards, but you know what I mean. I’m still in awe to see how few site cards can create a really rich world, that feels like it has a lot of history behind it. The denizens can really work well together, but you can only keep so many as advisors, so you play them to sites, which then encourages you to rules those sites, so you continue to have access to those denizens. It’s really all in the cards.

What’s also amazing is that, even though the rules are a real tough nut to crack and will test even the most patient of people, in reality, everything is right there in front of you – on your player board, on the relics, on the banners or on the denizen cards. The symbols might not always be completely intuitive, but they’re not actually that hard to understand. Yet, every time I’ve played Oath, we had plenty of questions about the rules. The thing is though, the rules are actually really straightforward. The questions only arose because we were overthinking things. It was really our own fault. We were trying to make things more complicated than they are.

If you, as the target of a campaign, pay a secret on a battleplan card to reduce your opponent’s attack dice for example, then that secret will end up in your opponent’s coffers during their rest phase1. It’s really simple: all secrets on cards go back on the player board. However, we thought we had to remember who paid the secret and it would go back to them. No. Keep it simple – and yet, that simplicity took a lot of hard work and thinking to create – and that simplicity actually creates a game with lots of depth, strategy and tactics. It’s very, very clever indeed.

There is also some asymmetry in this game. You have the chancellor and then you have the exiles – but you also might have some citizens. Everyone plays the same game, but there are different goals and different winning conditions. Not only that, there are also many moments where the exiles need to work together to stop the chancellor from winning, but at the same time only one player ever wins, so the exiles then need to backstab each other to take the victory for themselves. Those alliances are in constant flux and it’s no surprise that there are no binding agreements in Oath, except for maybe one or two situations.

Playing as the chancellor also feels very different to playing as an exile – and becoming a citizen halfway through the game also changes how the game feels to you. In fact, every game feels very different, even if you always start with the suggested first setup of the game. Depending on what cards come out and how the sites are arranged on the map, players will make different decisions and will have to choose their strategies accordingly. It’s a game that will never be the same twice – or very rarely.

However, that’s not actually the case. What Oath is really telling players is that the other players have to get their act together by the end of round five and taken the banner off the chancellor. Oath tells you to hold onto the banner and become the usurper at the right time. If you don’t sort things out in time, then you may be out of luck – or maybe you’re lucky and get one more round to take the victory off a fellow exile – who might be even more lucky than you and the game goes into round eight, by which time they take the victory away from you again.

The dice rolling creates an uncertain finish. Nobody can plan exactly for when the game ends. It forces players to try and get things lined up in good time and to ensure they can hold onto the victory for however many rounds the game will continue. It sets a minimum deadline by which you have to be ready, but then can leave you hanging for a bit too long. You may end up taking victory too early and then find out you’re unable to hold onto it all the way to the end. If exiles and citizens play it right, there won’t actually be any dice rolling at all and the game will go all the way through to round eight.

If you think about it in those terms, then the dice rolling suddenly makes perfect sense. It’s a clever mechanism that creates uncertainty and with it suspense and excitement. It’s something that many games do that use a deck of cards as a timer. There will be a “game ends now” card somewhere at or near the bottom of the deck. That card will have been shuffled into a number of other cards all of which are placed at the bottom of the deck. So you can be certain of the minimum length of the game, but you can’t be certain when it will end exactly.

I think, the more you play Oath, the more of its depth and detail it reveals to you. You will start to understand what the different suits can do to help you and you will have a preference for certain chronicles over others. If you win the game, you will influence how the next game will play. It’s another reason why you want to play Oath regularly, so you can keep your campaign going and fresh in everyone’s minds.

I can’t wait to play Oath again. Hopefully, it will be in real life soon. The physical components are amazing and will add to the game experience. It will also be a lot easier to see what’s going on as you play and quicker to reference the player board and other card text. So, the takeaway from my Takebacks review is that I still absolutely love Oath. It still holds a spell over me and I’m excited just thinking about it.