We had been transported to another world, another time maybe. The stars were all wrong, not matching any of the charts we had on board our ship, the Manticore. Captain Sofi Odessa decided we should make landfall and spotted a natural harbour nearby. As we got closer, we saw an old woman waving to us from the shore. It seemed like she had been expecting us. Once we had dropped anchor, we went to the starboard side to speak to the woman and find out what she wanted. She was clearly excited to see us and immediately told us that we were here to wake the Sleeping Gods by Red Raven Games. 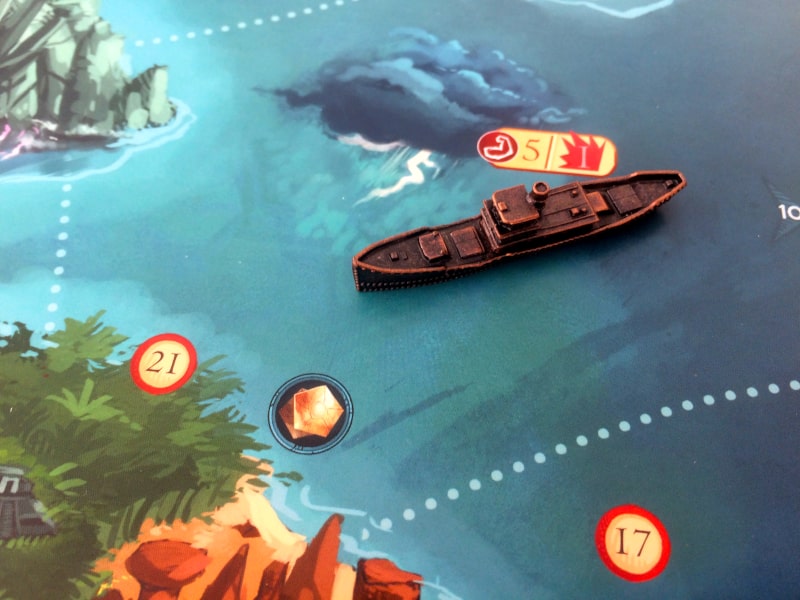 If you know other Red Raven games, you know how beautifully the illustrations by Ryan Laukat are and Sleeping Gods is no different. His style is very recognizable and really fits the gameplay. In the game, you are tasked with exploring the world and find totems that will help you wake the Sleeping Gods who will thank you by returning you to your own world. You will travel in your steamship across the ring bound atlas of around 20 pages, travelling from island to island and going on land to explore, meet the people of this world and sometimes fight off monsters to help you gain more experience and find clues about where the totems might be found.

If you know Near and Far, then you will immediately recognize how the atlas works and what kind of decisions you may have to make when exploring locations on the map. You will also recognize the concept of keywords and how they affect the storyline. However, Sleeping Gods really takes this much further and makes the whole experience even more enjoyable – and it’s a co-operative game, while Near and Far is competitive.

As the crew of the Manticore, you will have to work together and make joint decisions about what to do. You have to work out if you should try and get more supplies, maybe go to port to make repairs and heal wounded crew or whether you should continue on your journey and if you do, which direction to go. The world is fairly large and there are a lot of locations to explore, but you have to be careful, because members of the crew will get exhausted and can suffer wounds that will stop them from helping at all. So even though sometimes it might be tempting to explore another location, it might be better to turn around and return to port, where everyone can be healed and gain strength. You can also buy items, including weapons, that will help you on your adventures, so that is yet another decision you have to make.

Even though decisions should be made jointly, everyone takes turns being the captain and it’s them who will have the final say. So if there is ever a time when nobody can agree what to do next, the captain will make the ultimate decision. Of course, as captain you don’t even have to consult with the crew, if you really don’t want to, but as this is a co-operative game, it makes more sense to canvas the other players for their suggestions, even if you decide to do something completely different.

So far, it doesn’t sound very exciting, but what Sleeping Gods achieves really well and where it hugely improved on Near and Far are the so-called keywords. As you explore certain locations, you may be told to take a certain quest card out of the box, which is basically a summary of what has happened, as well as a keyword written in large letters underneath. These quest cards, or keywords, are basically the game’s memory, because as you go back to the same location or visit other locations and explore them, the storybook, which is another ring bound book of over 170 pages, may point you to a different story, depending on which keyword you have in your possession.

So for example, if you go to a location and dig something out of the ground, you will be given a keyword, which means when you explore that location again, you can’t dig the same item out of the ground again. The game has remembered that you were already there and had already dug everything up. The storybook will point you to a different section that tells you that you’ve already been there, which is really wonderful and is what really immerses you in the world that Red Raven Games has created.

There is another thing though when it comes to keywords. There are times when you might make a certain decision as you explore a location and as result you are asked to discard a certain quest card, a certain keyword. That keyword is now out of the game completely. You will never know whether your decision was a good one, or if you have lost a valuable opportunity to get a totem. So the effects of your decisions can ripple through the game and across the world. It’s absolutely magical.

Like many co-operative games, you are unlikely to win Sleeping Gods on your first go. There will be a lot of things that you learn during your first playthrough. You will learn to be a bit more conservative with the resources you have and that you should treat your crew kindly.

However, the first play of the game will also be a lot of time spent reading the rulebook. The game comes with a starter scenario, that tries to teach the game as you play, and even though it does explain a lot of concepts, we found that we had to refer to the rulebook quite a bit during our first play. There are a lot of things to learn, a lot of concepts to understand, which is unusual for games from Red Raven Games, so if you’ve played Near and Far before, be prepared to learn quite a lot of new things before you get to enjoy the game fully.

The time spent learning the rules is definitely worth it though. The storytelling is wonderful and the journey you will go on will be amazing. You will come across a lot of people, all of whom will provide you some sort of opportunity. You are likely to end up with a lot of quest cards, all of which lead you into different directions, so you have to just decide to follow-up one and maybe stick to that. There is certainly hours upon hours of gameplay in Sleeping Gods. I believe, officially there is supposed to be over 20 hours of playing time on offer.

Of course, you will never discover everything in a game, so you will want to play Sleeping Gods several times, and even though on subsequent plays you will remember certain locations, you will still have plenty more to explore that will offer you new surprises and new adventures.

Depending on the mode you play, the game either ends when your ship has sustained too much damage, all of your crew have lost all of their health or when the event deck has run out three times. I would recommend you play on normal mode, where the game is limited by the event deck, which basically functions as a timer. There are 18 cards in the deck, that represent more and more severe events that you will face on your turn. Once the deck runs out, you will refill it, play through it once more and then refill it one last time. If the deck then runs out again, the game is over and you will find out how well you did.

Yet, playing through basically 54 event cards takes much longer than just a couple of hours, so Sleeping Gods does have a save mechanism, which I think is really clever. Setting up and saving the game does take a little time, but it’s really neat and you can pick up exactly where you stopped. So you can stop playing at any point after someone has finished their turn and then start again when you have time.

You don’t even need to have the same players for every session, which is great. There are 8 characters in the game that are shared evenly between players and the captain character is controlled by whoever is the captain at the time. So if someone can’t make it to a session of Sleeping Gods, you can distribute their characters among the other players and carry on playing. It’s really flexible in that sense, but I must say, I’d probably prefer to ensure everyone is there for every game, as you do get slightly attached to the characters you control.

I really love Sleeping Gods and the world it inhabits. The storytelling isn’t necessarily at the same level as a good novel, but it works really well and does help you immerse yourself into the world of the game and make you feel for the people you meet and the crew of the Manticore, who are trying to get back to their own world. So if you want to spend an hour or two over several sessions living in another world and being another character, then Sleeping Gods is the game for you.