In the world of Arzium, groups of brave adventurers travel from town to town, where they load up on supplies and pack animals and recruit new members, who are willing to join them on the long journey, as they look for a lost city, called Last Ruin, where legend says lies a powerful artefact that will fulfil the finder’s innermost wishes. It is time for you to add your name to the list of famous explorers, venture into the wild to collect valuable and useful items, meet new people, return to town to work for money and food, travel through abandoned mines and do what is needed to successfully complete the journey. Near and Far: Amber Mines by Red Raven Games allows you to become a hero, if you can compete with your fellow bands of explorers and come out ahead. 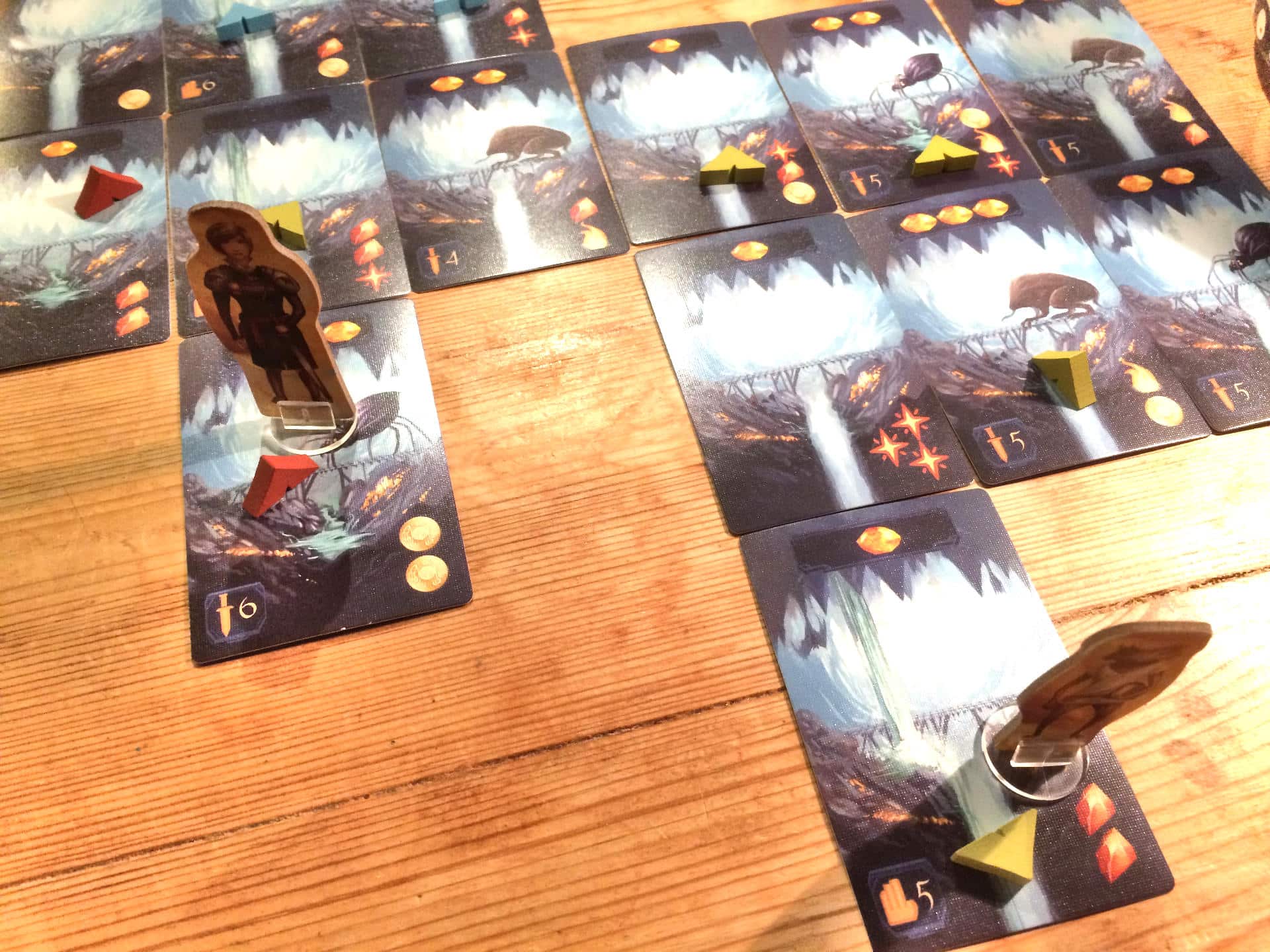 As the successor to Above and Below, Near and Far has continued to give players the chance to explore a new and mysterious world, where they will encounter other creatures and have to make decisions to prove themselves worthy. You continue to recruit adventurers to your group, but exploring has now been expanded into its own map, where you have to decide which route to take to reach the next encounter. You are only able to go so far, until you buy pack animals or otherwise give you more movement steps, so you can build camps along the route, which other players can use to allow them to go further. Along the way, you will encounter threats, which will grow stronger as the game progresses, so you have to ensure your party has enough swords to fight them off.

So unlike in Above and Below, where you simply decide to go exploring, you now have to deal with the logistics of your party actually travelling out onto the map, which creates a whole mini-game within the game. Encounters are peppered around the map, and often hotly contested, so there is no guarantee you will get there before your opponents. It feels very much like expeditions in films like Indiana Jones, where you rush to be the first to reach the goal, while your enemies compete for the prize.

There are a lot of differences between Above and Below and Near and Far, which I won’t go into here, because I want to focus on the expansion Amber Mines. Let me just say that Near and Far is certainly quite a different game to Above and Below, even though if you played the latter, you will feel very much at home in the former. Both are set in the same world, and both share many of the same concepts and mechanisms, dice rolling for encounter resolution being one of them.

The expansion to Near and Far, Amber Mines, really changes the base game and is well worth the investment, at least if you have played Near and Far and liked it, but want something more. The main difference, in my view, is that the mine, which is relatively boring in Near and Far, has now been replaced with something much more exciting. You can now explore the Amber Mines, which is basically a stack of cards, which you lay out as you explore the mine. The cards are shuffled for every game, so the mines will be different every time. It offers an alternative to exploring the main map, except that you won’t find any encounters in the Amber Mines. so you will still have to go out exploring the main map too, or you will lose out on valuable bonuses and the ability to get new talents at the beginning of the next game.

Another addition is magic. Now you can move up a magic track and get spells as you reach certain points, which you can use at any time, and which give you benefits similar to the treasure cards that you can collect in the base game. Spells are exhausted when used, and you will have to reset them by visiting the mystic’s hut, but they are quite powerful, so well worth going for. You will also get end of game points if you are the highest on the magic track.

There are a few other changes in Amber Mines, which refine some of the gameplay and make hearts a bit more important in the game. You also get more threats and adventurers, but overall it’s the new mines and the magic and spells that really take the base game to the next level. They are worth the investment alone.

So if you have played Near and Far and enjoy it, but feel you want to add some more, then take a closer look at Amber Mines. You will, of course, need the base game to play the expansion, but together they create a new playing experience.