As we know, and as I always say, there are so many games, chances are there is something for everyone. Not only that, there will be games for all sorts of different types and sizes of groups. That has always been true for family games that can be enjoyed by a wide range of ages and interests. In this article, I want to look at what it is I enjoy so much about playing games with my family. 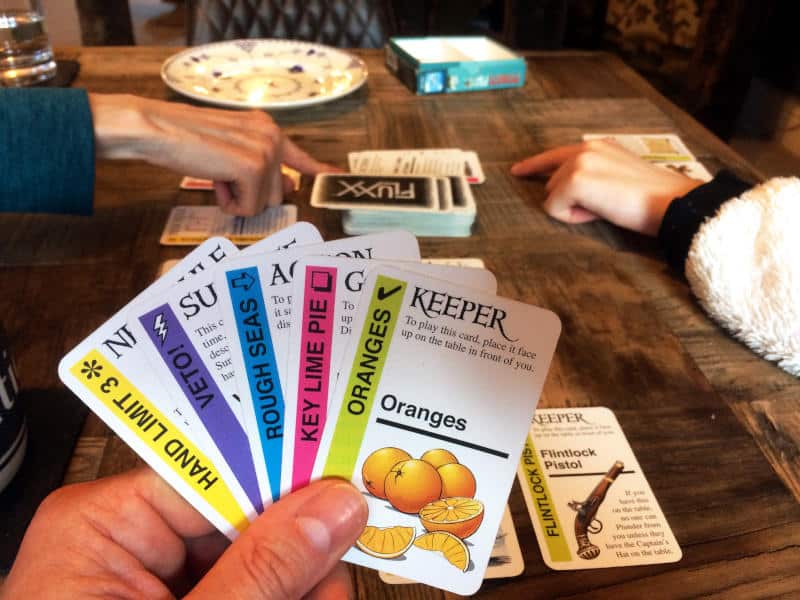 Of course, one of the main reasons I play games is the social interaction with people. That takes on a slightly different meaning when it comes to playing with your family, as opposed to friends or people you’ve not met before. As I mentioned in my article “Face-off“, I love the time my wife and I spend playing a game. It’s a special time. We connect, share time together and focus on the game.

It’s even more special when our daughter plays a game with us. She used to do that a lot, but when she became a teenager, it stopped. Luckily, and I’m extremely happy about it, she’s slowly coming back to playing games with us. They tend to be smaller, shorter games, rather than the longer and more strategic games we used to play. However, whether we play a single 10-minute game or get her to play several shorter games with us, it’s so wonderful to spend time with her as a family.

She prefers competitive to co-operative games. I think she wants to show that she can win against her parents. It’s a friendly sort of competitiveness, even if we sometimes fight nail and tooth. At the end of a game, there are never bad feelings. Our daughter has learned early on that losing isn’t a bad thing.

Games with Siblings, Nieces, Nephews and the Wider Family

In my article “He ain’t heavy“, I talked about the fun my brother and I had with board games. I don’t see him much these days, as we live in different countries, but my wife’s brother’s family lives nearby. I mentioned how we first introduced my brother-in-law’s family to board games and how they subsequently introduced us to new games in my article “Home is where the board games are“. So whenever we meet up, we tend to play board games together.

My two nieces tend to play with us grown-ups and our daughter. Catering for a larger group of players isn’t always easy. However, when the family gets together, everyone tends to be quite relaxed and people happily sit out a game or two. After all, we usually spend a whole afternoon together. So there is plenty of time to play games. Everyone is also happy to try out and learn a new game, which is a great opportunity for me to teach some new games or for them to show us their latest game. That makes finding suitable games to play together as a family a little bit easier.

Luckily, everyone also enjoys not just light games, but slightly more demanding ones. Chai is one of the more recent ones they like, for example, but we also play games, such as Colt Express. Azul has also been popular for a while. There is a fairly wide range of options to choose from.

Whatever we play though, it’s so much fun seeing people of a wide range of ages and playing styles play together.

Games with the Parents and Parents-In-Law

That also includes my parents or my parents-in-law. For them, I tend to choose lighter and quicker games. A firm favourite with my parents is Carcassonne. I guess, it’s an evergreen game for a reason – and not because of the colour of the tiles. It’s such an easy game to explain and so very visual. My mum plays very competitively, while my dad doesn’t really mind either way. My wife’s parents usually just want to build a beautiful map. Either way, it’s an hour or so well spent. Yes, it’s an hour for us, because we always play with at least one expansion.

I recently introduced Town 66 to my wife, our daughter and subsequently my parents-in-law. It’s another very visual game that’s very easy to teach. It does require a little bit more focus though. So it’s a bit more taxing, but everyone really enjoys it. It’s such a fun little puzzle that game creates and trying to be the last player standing, while having the least number of tiles in your hand is a lot of fun.

My plan is to introduce them all to Scout, which I think they will enjoy for similar reasons. I know that both games are very different, at the same time I feel they scratch a similar itch. Both are from Oink Games, so it’s no surprise they feel similar in some ways. They’re both certainly easy to explain and don’t take very long to play.

Now I want to know if you play games with your family. If so, what sort of games do you play? Do you choose different games depending on which part of your family you’re with? Do you have some games that you think always hit the mark? Please share your experiences and suggestions in the comments below. I’d love to hear what games you play.