It was the fifth factory you had visited today, as you were trying to find three turquoise ceramic tiles to complete your pattern in the King’s palace. You needed three – exactly – no more, no less. The first factory you had visited had no turquoise tiles, the second had four, the third had only one and the fourth had two. The factory you were in now, was the last one that made these tiles, and if it didn’t have the exact number of turquoise tiles you needed, you had to go back to the previous one and make do with two, which would put you behind schedule and make the King angry. Yet, you were in luck. The factory overseer told you that they had your tiles and exactly three of them. You were so pleased that you found three tiles that were all Azul by Next Move Games. 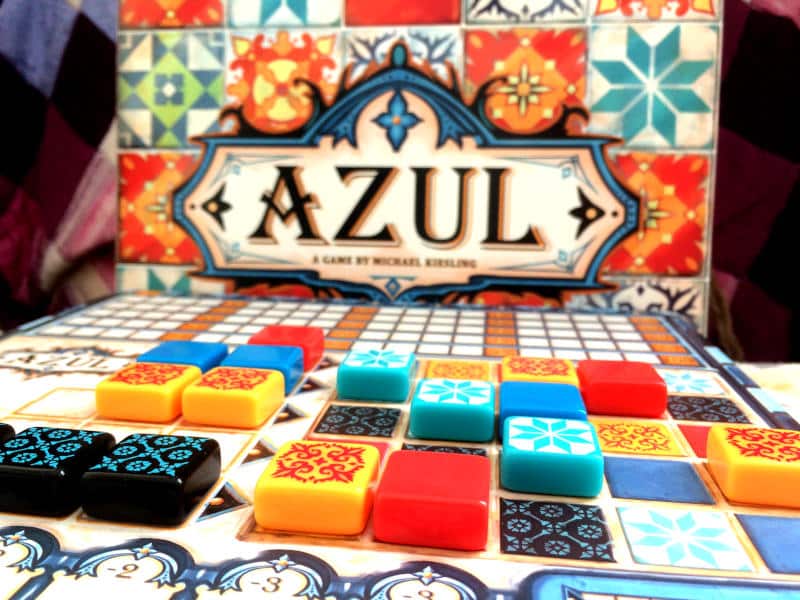 Of course, the theme is wonderful, just like the chunky, weighty, plastic tiles in the large cloth bag, which sound like glass marbles when you mix them through or draw them to place on the factory displays.

However, the theme is really only superficial. You collect a certain number of one type of tiles to complete a row, and once you have completed it, you discard all the tiles, except one, which makes it into the pattern. I really don’t think that’s how the decorators of the Alhambra went about creating the beautiful Moorish design, but of course, that mechanism is one part of what makes this game so interesting.

The other part is how you get your tiles for your rows. You take all tiles of the same colour from one of the shared factory displays, but you also have to be very mindful of what other players need, because you usually need to pick tiles from at least two factory displays to complete a row, but so do your opponents.

If you can see someone needs a specific tile, which is only available on a specific factory display, you probably want to go there first, not necessarily to block the other player, even though that’s an advantageous side effect, but so that you can be sure you get the tiles you need for your mosaic.

It is this mechanism that creates a huge amount of player interaction and ensures everyone is staying focussed on the game and what everyone else is doing. It’s what forces people to be active participants, making it impossible for anyone to play it multiplayer-solitaire, at least if they want to have a good chance of winning.

Mind you, when you first play Azul, chances are that’s exactly what you will be doing. There is too much to think about on your own player board to worry about other players. You will be playing multiplayer-solitaire for a few rounds, until suddenly you realise that the tile you need is on a factory display that someone else needs, so you better choose it first.

There is much more to player interaction in Azul though. You can take it in the direction of actively spoiling someone else’s mosaic – or rather forcing them to take negative points. The fact that any tiles not taken from a factory display are pushed into the middle creates a new pool of tiles that can allow you to get the exact number of a specific colour you need, all in one go, but makes it also possible to be forced to take way too many tiles of a colour from the middle, because there is nothing else left, which will give you a lot of minus points.

So once you have played Azul a few times, you will start to think a few turns ahead, working out what colour tiles players need, what factory display they are likely to take it from, what pool of tiles will be created in the centre and then decide which factory display to choose yourself or whether it is more beneficial for others to push certain tiles into the middle, so that you can take them all in one turn and possibly complete multiple rows.

Azul can feel very strategic, which is great, but unfortunately a lot of times it is also very deterministic. Even though who starts each round usually changes, when you come to the end and the choice of tiles is reduced, it will quickly become apparent who will end up with the seven black tiles that nobody wants – and there is nothing anyone can do about it. All your planning is undone in one fell swoop and that doesn’t feel good.

However, if you do plan ahead really well, you can, at least in theory, foresee this situation and decide to take a smaller amount of the same unwanted black tiles earlier on, and as a result, someone else will end up with the rest of those tiles, giving them minus points, rather than yourself. Yet, that does require a lot of foresight, which I think only a few people will have.

There is one more interesting mechanism in Azul and that is the scoring. You are trying to build your mosaic in such a way, that every new tile added to it is orthogonally adjacent to already placed tiles. The more tiles you connect horizontally and vertically when you place the new tile, the more points you get.

It’s the scoring mechanism that forces you to sometimes risk taking certain tiles, even though it’s clear you won’t complete your row this round, just so that in the next round you can create a huge number of points and hopefully push into the lead. In fact, ultimately it’s only when you understand the scoring that you can win the game consistently, which is almost a shame, because the scoring mechanism dominates all the other wonderful mechanisms in the game.

Overall though, Azul is a wonderful game that’s not too hard to teach, doesn’t take very long to play, looks beautiful on the table and is very tactile. I will always enjoy playing it, when offered to me, and can only recommend you try it yourself.