I had the pleasure of trying the prototype PnP version of Chai by Deep Aqua Games, which is due to launch on Kickstarter on 4 December, so keep an eye out for it. The aim of the game is to collect resources, in this case flavours and additives, to fulfil the outstanding tea orders for customers, which give you points. It’s the classic mechanism of completing contracts or quests, like in so many other games. 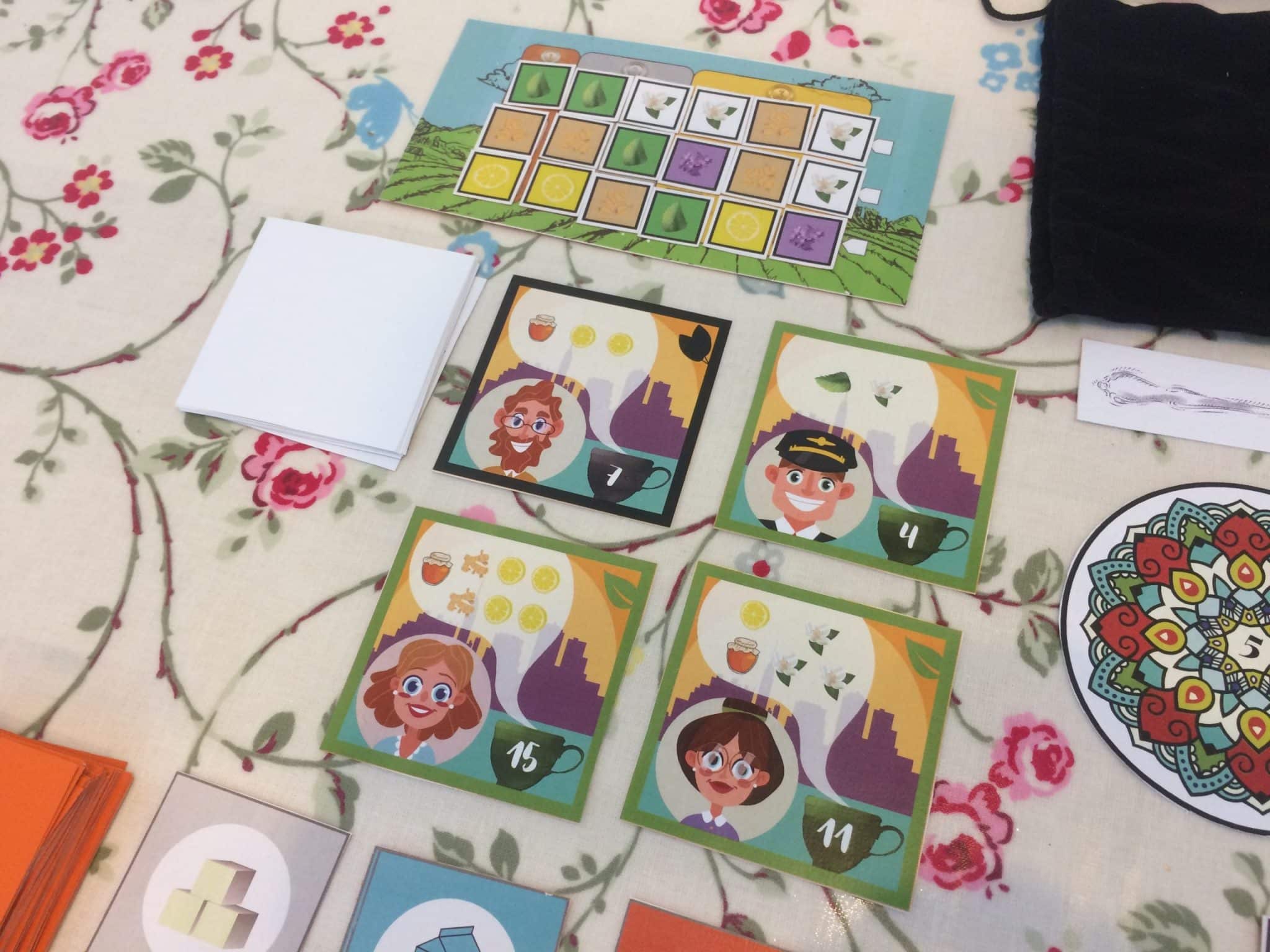 However, the twist is how you collect your resources from the market, which creates a really interesting puzzle which forces you to think ahead and work out what you need versus what other players may need.
First things first though. I have played Chai only in competitve mode with a total of two and three players.

However, the game looks like it will come with a solo mode, as well as the option to play competitively against an automa player, which will create another layer of interest for a whole new group of people. The game is relatively quick to play, maybe around 15-20 minutes per player, and quite easy to learn. The rules seem complicated, like with so many games, but you can easily explain the game while you play, which really reduces the threshold for a lot of people and makes it almost a gateway game.

However, don’t be lured into a false sense of security. On the face of it, the game looks really easy – go to the market and buy some flavours, select some additives and then brew a nice cup of tea for a patiently waiting customer to get points and maybe even a tip. That sounds easy in itself, but put your thinking caps on because you do have to plan ahead and keep an eye out on what other players are trying to do.

After all, everyone can fulfil any outstanding order, except those that you have reserved for yourself. So if you’re not careful, another player may server a customer before you, making all those wonderful flavours and additives you collected a waste, unless you can use them on a different order. However, you only get one action a turn – either collect flavours from the market, or get some additives, or reserve a customer order. Once you have done your action, you can then choose to complete an order, if you have everything needed to server the customer.

That means on your turn you always have to decide if you reserve an order, just so you can steal it away from another player or make sure nobody steals it from you – but then you might miss out on some vital flavours or additives, which other players could take when it’s their turn. There is that constant tension between which one of the actions to take when, already forcing you to think ahead.

The market does add another interesting puzzle though – and it’s probably my favourite mechanism in the game, so let me explain. The market is where you get your flavours from, which make up the bulk of your customers’ tea orders. It consists of three rows with six columns each. Like in many games, the flavours furthest to the left are the cheapest and as you buy flavours, the remaining ones shift to the left, making them cheaper. So by buying flavours cheaply, you are going to make other flavours cheaper for other players. That isn’t all though. You always have to buy all flavours that are touching horizontally or vertically, and you always have to pay the price of the most expensive flavour in that group.

It is almost like a reverse Tetris game, because when you remove a Tetromino block of flavours, the others shift to the left, which in turn may connect previously unconnected flavours. You are able to buy as many flavours as you have money for, which means you do have to think about the order in which you buy them – and also see if you leave the next player a cheap block of flavours for them to buy.

These mechanisms make the game a lot of fun and an interesting puzzle. The art is also really beautiful and vibrant, making it a joy to play. We found two and three player games just as interesting, which is great, because sometimes two player games can feel like an afterthought, but not with Chai.

I will definitely keep an eye on this game when it hits Kickstarter and I strongly recommend you do the same. Dan and Connie have done a really good job, and I am keen to see how the automated players will work. I am very pleased I was able to try the prototype print-and-play version of this game.