I thought long and hard about how to start this review. Usually, the introductory paragraph of my reviews is like a short story, setting the scene of the game and the experience you’re likely to get. I finish by linking back to the title of the game, making it part of the short story. Yet, for this game, its name is a little short story in itself. So I might as well just go straight to the title. Here goes… In this review, I look at A game about stuffing balloons as a team, without talking. But it’s a card game – there are no actual balloons by Bez Shahriari from Stuff by Bez. 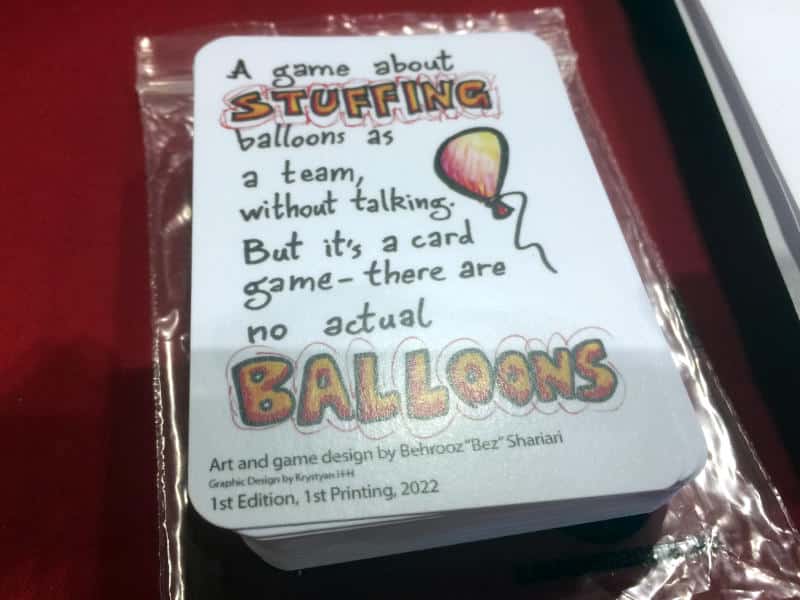 A game about stuffing balloons as a team, without talking

There you go. The title tells you what the game is about. That’s not unusual for Stuff by Bez. Most of their games have names that outline what they’re about. It makes them a bit of a mouthful to talk about, but it certainly helps convey the gameplay.

So in A game about stuffing balloons, as I’ll call it from here on in, you work together to stuff balloons. Everyone gets a deck of cards, representing a different creature who helps to stuff those balloons. The decks are functionally the same, so what creature you choose for yourself is purely about which one you like best or maybe your favourite colour.

Every card has two numbers, a weight and a spikiness value, and shows the item you’re trying to stuff into the balloon. It could be a small game, which isn’t heavy and not spiky. It could be pins, which are very spikey while being light. Bubblewrap has a negative spikiness value and is very light, allowing you to counter the spikiness of pins.

At the beginning, everyone shuffles their deck and draws four cards to form your starting hand. The game is played in rounds. In the first round, you’re trying to stuff one balloon, in the second round two balloons and so on.

There is no turn order in A game about stuffing balloons. You play your card when you’re ready. In the first round, if it’s the first card played, then you play it face up. After that, all cards are played face down. That means nobody can be sure what others may be playing. If you have bubblewrap, you might want to counter someone else’s pins, but nobody is allowed to talk. So it’s possible that you play your bubblewrap face down, but nobody plays any pins, wasting your bubblewrap.

Then everyone draws back up to four cards again and a new round begins. In the second round, the first two cards played are face up, representing the beginning of two separate balloons. In the third round, it’s three cards for three balloons and so on. You can see that this can become quite hard, quite quickly.

As nobody is allowed to talk, you have to try and somehow communicate to your fellow players what cards you’re playing. You all work together, so if you have a card with pins on it, you would love someone else to play their bubblewrap, for example. A bit like in The Mind, your group will start to develop a way of working out what the others are thinking. You’ll slowly start to sync your minds and guess when it’s time to play a light card that has a negative spikiness value or if it’s safe to play a heavy item.

A game about stuffing balloons is also a little bit chaotic, because there is no turn order, but in a good way. It takes a little encouragement to get people out of the habit of waiting for their turn, but it doesn’t take long. Once everyone gets it, everyone will just chip in when they’re ready and think they’ve sussed which card is the best one to play onto which balloon.

Balloons for all Ages

The rules are so simple, the game is just a deck of cards and it’s over so quickly that it’s great to take with you anywhere you go. It’s a game for all ages. Younger players can practice arithmetic, provided they have learned about negative numbers, of course. Older players will love trying to work out what others are thinking and which card to play.

The illustrations are wonderfully crazy and colourful. Bez‘s creativity definitely shows through and invites you to give the game a go. It’s just glorious.

So, if you want a quick game, that’s easy to teach and easy to carry with you, then A game about stuffing balloons is one you should take a look at.