I love playing board or card games with my wife. Spending a little, or a lot of time together focused on the same activity is a wonderful way to connect. It started as a date night, but now we might play a quick 5-10 minute game or two over lunch or we play a longer game. Co-operative games tend to be our favourite. Working together to solve the puzzle that the game presents is a lot of fun. That’s why we also love solving the Sunday crossword puzzle together. There are very few two-player competitive games that we enjoy and in this article, I want to explain why. 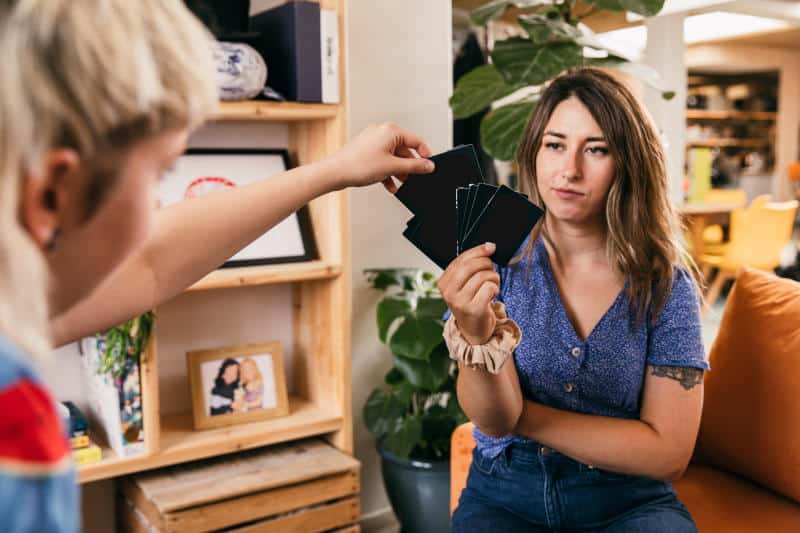 Let’s start by talking about the handful of competitive two-player games we do enjoy playing together.

In We Can Play by Julia Johansson and Albert Pinilla from Julibert you’re trying to play cards in chronological order. You need to guess which year an event took place and add the card to your existing timeline accordingly. Even though only one of us has to say the year, both of us tend to try and guess it, one silently, the other out loud. It’s great to see when one of us gets it right and even though we’re playing competitively, we secretly do root for each other. It’s also a great test of our own knowledge of history.

Wingspan by Elizabeth Hargrave from Stonemaier Games is another example. We both try to score the most points and have the best bird sanctuary, but we also enjoy seeing when the other player pulls off a great combo. There are even elements in the game where the other players benefit from your actions. Ultimately though, it’s just such a beautiful game. You can stare at the cards for hours.

One of the reasons why competitive two-player games often aren’t enjoyable is direct player interaction. In the games I have mentioned above, there is very little you can do to negatively impact the other player’s game. In We Can Play, the only time you have any influence is when a player is about to win. In Wingspan, you can try and take a bird from the display or food from the birdfeeder that you think another player wants, but that’s more or less it.

However, in a lot of competitive games, there is a large emphasis on direct, negative player interaction. That’s fine in a game of three, four or more players. In a two-player game though, you are forced to attack the other player. There is no choice. In a three or more player game, at least you can decide to attack the player in the lead. That’s when negative player interaction is a way of stopping a runaway victor. In two-player games, it just leads to negative feelings and bad blood.

That’s why some competitive games add rules for a two-player mode that remove the negative, direct player interaction. For example, you might be asked to remove cards that have negative effects on other players or they make those effects optional. There are also some games where players control two or more characters or factions when there are only two people playing. It’s a way of making the negative, direct player interaction feel less severe and less personal.

Bidding, or auctions, is another mechanism that often causes problems in two-player games. That’s especially true if the amount of money, or other resources used in the game, is public knowledge. Auctions suddenly become a matter of counting each other’s money and then just bidding enough so the other player can’t afford to bid more. It’s very boring and the game might as well do away with it when played with only two players.

Biblios by Steve Finn from iello solves that problem very elegantly in my view. First of all, your hand of cards is not public knowledge. So nobody really knows how high you can bid. Additionally, you are allowed to bid more than you have, but if you win the auction, you will have to pay a hefty penalty.

However, games that implement bidding for two players well are far and few between. They exist, but you do have to look hard to find them.

Ultimately, competitive games where all players pretty much do their own thing and where there is very little or even no direct player interaction tend to be the best for two players. The concept of multi-player solitaire games is well known in games for three or more players and there are plenty of people, including someone in my games group, who love them.

For me, multi-player solitaire is usually not as much fun when I play with my games group, but when I play a two-player competitive game with my wife, it’s perfect. If there is positive direct player interaction, then that’s also good. However, in that case, we do prefer to just play a fully co-operative game.

As you know, I always love to hear what others think. So, what types of games are your favourite when playing with only one other person? Do you choose co-operative or competitive games? Do you enjoy direct, negative player interaction in two-player games? Who do you play two-player games with? Please share your thoughts and experiences in the comments below. It’d be great to hear from you.