From ancient times to the present day, women have never been recognised for their contributions to the world. Yet, throughout history, there have always been women who were strong leaders, who fought for better conditions and equal rights, and not just for themselves, who made significant scientific breakthroughs, were trendsetting artists and did everything their male contemporaries did. So it is time for all women around the world to say: We Can Play by Julia Johansson and Albert Pinilla by Julibert. 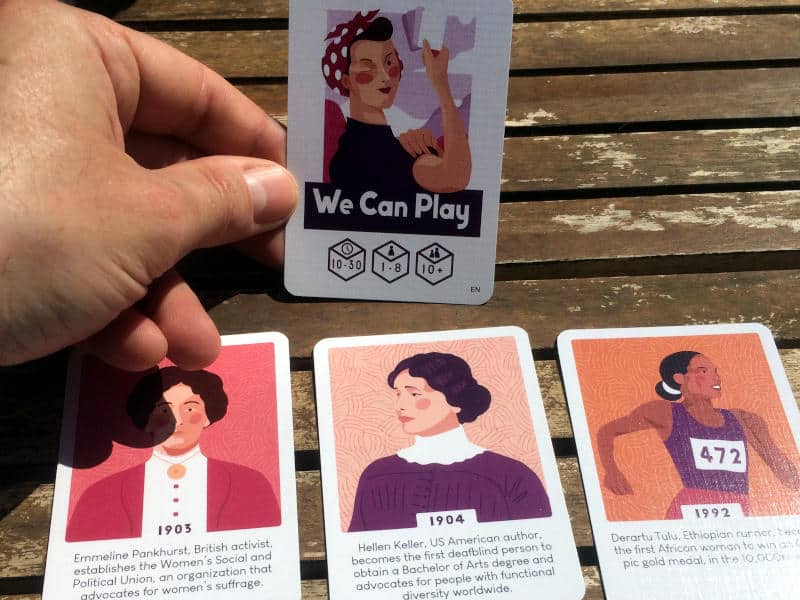 It’s no small task to try and create a game that inspires future generations and not only remembers these amazing women, but also keeps their examples alive. Yet, that’s exactly what We Can Play is aiming to do. It features 101 women “who changed the world”, as the game says itself, covering a time range starting with Hatxepsut in 1507 BC and going all the way to Kamala Harris in 2021. That’s a lot of women and a time span of over 3,000 years, from ancient history to the present day.

Timeline with a Twist

We Can Play is a card game and follows the same sort of rules as the ever popular Timeline game that has been released so many times over the years. So your aim is to play cards in front of you in chronological order. The first to have 7 cards in the correct order in front of them wins.

All of the cards are double-sided, where both sides are basically exactly the same, except that one side shows a year, while the other doesn’t. Everyone starts with a card from the deck in front of them and with the year side up. On your turn, you look at the top card from the deck, which doesn’t show the year and read its text. It tells you who the woman is, who is depicted on the card and one of her achievements. You now need to decide where this card fits into the timeline currently in front of you. Once you’ve made your choice, flip the card over to reveal the year. If you were right, you keep the card and if you were wrong, you discard the card and it’s the next player’s turn.

There are a few more rules and small twists, like a small push-your-luck element and a kind of wildcard, that make We Can Play a bit different from your usual Timeline game, but it’s all really easy to learn and teach.

Few Rules for a Big Message

It is the fact that there are so very few rules that is so important, in my view. Without the rules overhead, you can really focus on the women and their achievements. You will recognize a lot of the names and you will probably have a rough idea as to when these women lived, but it’s not always as easy as you might think.

Placing Hatxesput before Sappho isn’t difficult. There are nearly 1,000 years separating them. However, working out that Yusra, Palestinian excavator working for archaeologist Dorothy Garrod, found Tabun 1, a 120,000-year-old Neanderthal skull at Tabun cave, Israel a year after Clara Campoamor was elected deputy of the city of Madrid is a lot harder.

So when you get it right, you’re really pleased and proud of yourself – and you should be. Reversely, every time you make a mistake, you will remember the year of the event listed on the card. Slowly, you will absorb these women’s names and their achievements.

We Can Play‘s goal of keeping these women’s examples alive is clearly being achieved and done in such a fun and entertaining way.

A Game for Every Age

The other goal, encouraging new generations to dream big, is also being achieved in my view. We Can Play is a game that can be played by people of all ages. You don’t have to have a history degree to place these women in the correct chronological order. In fact, there are many women from modern history featured in the game and it’s likely that it’s younger players who will know much better when these women did what is described on their cards.

For example, I didn’t know when Megan Rapinoe was named the Best FIFA Women’s Player, even though I was vaguely aware that she is an advocate for a number of LGBT organizations. However, I’m sure that my daughter would have known that and would have been able to place the card correctly. I think there is a nice balance between women from ancient history and the present day that allows people of different ages to play together and be on an equal footing.

I have to mention the game’s green credentials as well. It is fully FSC certified, as should be the minimum for everything that uses wood pulp these days, as well as certified as a climate-neutral production. We Can Play was made with 100% renewable energy. On top of that, there is basically no plastic in this game. The card decks come wrapped in a paper bellyband, rather than shrink-wrapped in plastic.

I think that’s amazing and should be an example to publishers everywhere. I appreciate not everything needs to be plastic-free, but there are times when alternatives exist, even if they’re more expensive. It’s great that We Can Play has gone the extra mile here, without skimping on quality.

I mean, the illustrations are wonderful. Albert Pinilla‘s style works perfectly. It’s slightly cartoony, without feeling childish. It’s really appealing and the colour palette adds to this really well. The card stock is also really nice and the cards have a linen finish, which means they don’t slide about. The box is also good quality and even though you might prefer to put the game into a tuck box, so it’s easy to take with you, the box the game comes in is still pretty small – basically two decks of cards side by side.

I’m really pleased with We Can Play. It’s really easy to learn, very quick to play and will appeal to people from all age groups. It’s the sort of game you probably want to play several times in a row, maybe in the form of a “best of” contest, where you play a set number of rounds and whoever won the most games at the end wins.

So, if you want a game where you have fun while learning about amazing women from the past and the present, then We Can Play is definitely for you.