The last UK Games Expo I attended was 2019. It was an amazing event and I came back from it buzzing, full of ideas and the energy you get after you’ve been able to catch up with good friends again. We all know what happened soon after the 2019 event. So when UKGE came back as an in-person event in 2021, I decided to give it a miss. However, now it’s 2022 I’m ready to dive into the crowds again and meet lovely board game people at UK Games Expo 2022. 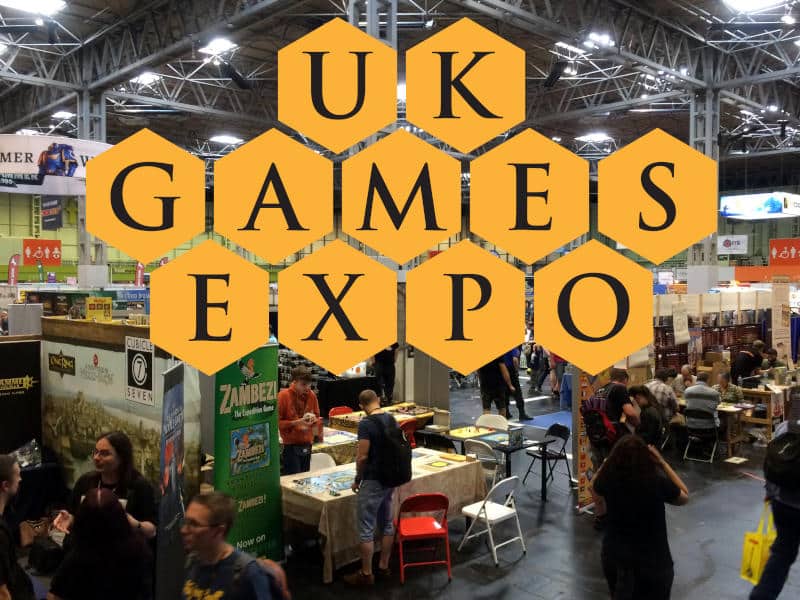 It’s around a 4-hour journey for me each way by car. So I’ve booked a lovely little B&B nearby for the two nights that I’ll be at the Birmingham NEC. A friend of mine, one from my games group, is coming along as well, and is splitting the travel and accommodation costs with me. That means it’s not quite so expensive and allows me to stay more than just a single day, as I used to do.

It is set to be a really busy event. I’ve got my press pass ready and will be at UK Games Expo 2022 for the Show Preview on Thursday night until Saturday afternoon or evening, depending on how tired I am by then and if I’ve been able to see everyone.

That’s going to be quite a big task though. I’ve already got a long list of people I definitely want to meet up with. I want to talk about the potential to review games, but also just get a chance to catch up with people in person.

Seeing James of Naylor Games is a must for me. He and the team will be on stand 2-T23, showing off Magnate: The First City and possibly the next game in their line-up, which I had a sneak peek of a while ago and which looks really very interesting and very different to Magnate. So you definitely have to pop by and see what it’s all about.

There is also Robin of Ruined Sky Games who will show off his game Circulari on stand 1-1151. I can’t wait to see how the solo mode has come along. The game promises to be a really excellent brain burner. It’s really clever and will hopefully launch its crowdfunding campaign soon.

There is Scott of Minerva Tabletop Games on stand 2-551. Their game Swatch is now available for pre-order and I highly recommend you take a closer look. I’m also hoping to try out at least one of the games Scott has in the pipeline. I’m especially interested in Six Days of Silence (working title), which is a very interesting co-operative game with a lot of clever mechanisms.

I also want to catch up with Jessica of Dissent Games on stand 2-482, whose game Library Labyrinth I had the pleasure of reviewing. Another really interesting co-operative game about women from literature, created by an all-female team. They’re also going to have their latest roll-and-colour games there, which I want to take a closer look at.

Laurie and Rhi of Stop, Drop and Roll (aka SDR Games Studio) are also on my list. They’re on stand 2-441 and will have Earth Rising to show off and probably some prototypes. It will great to catch up with them and see how everything is going.

Bez of Stuff by Bez is going to be there too, of course, and I don’t want to miss seeing her again. She’ll be on stand 1-T11 and I strongly recommend you pop round there yourself. She always comes up with really imaginative games that are very different to anything you’re likely to have ever played before.

I will also catch up with Nikita, meeting her for the first time in person. She’s on stand 1-1058 with Atikin Games. I had the pleasure to translate the rulebook for Tri To Win from English into German. I’m hoping to get a sneak peek at Malum Hortus, the game that’s in the pipeline at the moment, but of course, she’ll have the Animal Alliance series of games there too. Definitely worth having a look. She might even have some homemade game accessories there for you to buy.

It would also be great to see Mark of Airecon fame again. He tells me that he’ll be on the Gameland stand number 2-720. I want to hear what he’s up with regards to Gameland, as well as Bright Eye Games of course. So that’s going to be very exciting.

Michael and Rain of Wayfinder Games are also on my list. They’re on stand 2-587 and will be showing off their latest game, Blaseball. So if you like baseball, even if you know nothing about it, then pop by. I got a demo of this deck building/hand management game at Airecon 2022, but I want to give it another whirl.

Gavin of James Family Games Night is demoing games on the Ravensburger stand 2-764. I can’t wait to finally meet him in person and see what game he wants to show me. As you’ll see further down, I want to pop by the stand for another reason too.

There are also a number of people at UK Games Expo 2022 who don’t have a stand.

Ann of Cards or Die, who organizes board game events, does great work in her community and generally brings people together through our amazing hobby, is someone I hope to play a game with, either during the show itself or afterwards on one of the many open gaming tables.

Paul of Gaming Rules will be there too, but this time he’s just visiting, even though I’m sure he’ll be seen demoing games somewhere, because he loves it so much. If you don’t know his YouTube channel yet, then I strongly recommend you take a look right away. Lots of rules teach and playthrough videos for all of the latest games. He’s also running a charity event at UK Games Expo 2022 on Saturday at 7pm in Piazza Cartamundi theatre. Play a game of Just One and do some good at the same time.

Rory and Matthew are showing off their latest game under the Postmark label in the open gaming section in hall 3 at 2pm on Friday 3rd June. I met Rory in person at Airecon 2022, but haven’t met Matthew yet.

I also have a long list of companies I want to visit while at UK Games Expo 2022. So let me choose a handful.

Osprey Games on stand 1-927, Steeped Games on stand 1-144, Ravensburger on stand 2-764 and Hachette on stand 2-538 are companies that have been really supportive by giving me review copies of their games. So I definitely have to say hello and thank them for their trust in me.

So Much to Do

Of course, there are many other exhibitors I want to see and talk to about their games. That’s what is so wonderful about UK Games Expo 2022. It’s a very large event, but it also means you will be able to speak to a lot of people in a very short amount of time. Everyone is in one place.

I can’t wait to see what games everyone has brought to UK Games Expo 2022 and which ones they’ll be showing off for the first time. Hopefully, I’ll have time for a couple of demo games. It’s always exciting to play a game that’s not been released yet and see what it’s all about.

Overall, it will be an exciting event and it will be great to have a good friend of mine with me. That means we’ll be able to play games together in the evenings in the open gaming zone and he’ll be able to share his discoveries with me. He is likely to spot something I missed. So together our net will be spread wider.

If you’re at UK Games Expo 2022, please let me know in the comments below. Share your plans and tell me if you’re on a stand and want me to say hello.