The Caliphate is in turmoil. The Murshid spreads its influence and whispers into the Sultan’s ear, trying to affect where they build their magnificent towns and cities. The Warlord ravages the lands, plundering and destroying everything in their way. Nothing is safe and everyone has their own goals. So as the sun sets on the deserts, mountains and fertile lands and as day turns to night, the warring factions prepare for another day and get ready to put their plans into action. For now, though, it’s the time of the Crescent Moon by Steven Mathers from Osprey Games. 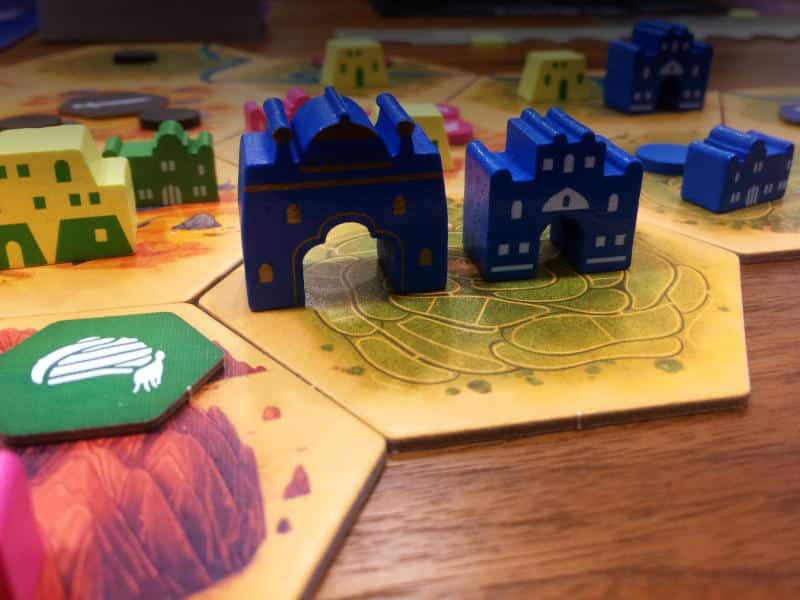 Crescent Moon is set in the Middle East in the 10th century and onward. It covers the Seljuk
Sultanate1, Ghaznavid dynasty2, Fatimid Caliphate3 and Byzantine Empire4, amongst others. According to the rulebook “these empires waxed and waned [through diplomacy and conflict], repeatedly wresting power and territory with one another in the lands east of the Mediterranean, as well as pushing into north Africa, the Iberian peninsular and deeper into south and central Asia.”

Unfortunately, I know very little about the history of this region or the powers portrayed in Osprey Games’ Crescent Moon. Without doing some extensive research, I am unable to compare how the game brings these events from history to life to the real events that happened. I’m also unable to gauge the seriousness and importance of these events, let alone get any sense of the suffering and brutality that is likely to have occurred during this time period.

However, it is clear that a lot of wars were fought and people will have died in large numbers. It is also clear that many people will have lost their homes and had to flee or endure a new, probably merciless ruler, as one power expanded and took over populated areas.

Crescent Moon‘s rulebook points out that “the imperial balance of power remained fluid [and] so too did their affiliations, languages and ethnicities, intersecting with one another in ways that may confound
a contemporary sense of ‘identity’.” It goes on to say that “rulers transgressed sectarian boundaries through marriage in pursuit of power [and that] dynastic families of Turkic ethnic origin often Persianised their mores to cultivate a stronger link to a pan-Islamic cultural prowess.”

So, it is against this background of political scheming and the spread of power through marriage and war, with all its terrible implications, that Crescent Moon is set. It’s not an area control game in a made-up world that’s highly abstracted. The rulebook makes clear what this game is about.

The publisher clearly took their responsibility seriously and realized that a game set in a probably rather brutal period of history requires appropriate treatment. Osprey Games made sure that the game was overseen by a cultural and historic consultant, who is of Muslim background and trained in the history of the Middle East during the time that Crescent Moon is set.

The illustrations found in the game were mainly created by someone with Muslim origins and they reference a number of artworks from the Islamic world, which do lend the game an aura of authenticity and help the players immerse themselves in the culture portrayed in the game.

Osprey Games is known for high-quality components in their games and Crescent Moon is no different. It comes with cardboard hexes so you can set up different maps. Just choose one of the five from the back of the rulebook. The different maps provide lots of variability and different levels of difficulty.

There are also a large number of thick cardboard tokens that represent a faction’s influence. The over 100 wooden tokens in Crescent Moon feel lovely in your hand and are beautifully screen printed. They are your military units and buildings you put out onto the map.

A giant deck of nearly 70 cards creates another dynamic in Crescent Moon. The cards are of really good quality, with linen finish, and give you special actions or abilities or they allow you to affect the outcome of combat or influence contests.

So overall, the game has a really wonderful table presence, but it is also a bit of a space hogger. The map itself isn’t too bad, but the cards are laid out into four so-called markets. These do take up a large amount of space. Imagine having to lay out 9 cards side by side, but with a good gap between them. That will easily take up one long edge of your table.

The only real niggle that I have with the components are the player leaflets. They’re quite large and will also need space somewhere. They’re also made of relatively thin paper and as you will find out later in this review, you will be using them a lot. So it won’t take long for them to start to become rather worn. It would have been good to make these smaller and stronger.

Crescent Moon is a glorious mix of area control, hand management and asymmetric factions. Some factions will have to work together to stand a chance of winning. So throughout the game, uneasy alliances with other players will form, but nobody can ever be sure when these are broken as the power on the map shifts.

Every faction plays differently and wins in different ways. Even though many of the possible actions you can take on your turn are the same for all the factions, at least in principle, there are also actions that are unique to your and maybe one other faction. So every player is given a 4-page A4 leaflet that explains all the factions’ actions, unique or general, and all the other things you need to remember.

Crescent Moon plays over a fixed number of rounds, or rather years, as the game calls them. Each year gives every player 4 actions. A shorter game plays over 3 years, but the full game is 4 years long. So everyone has either 12 or 16 actions. That’s not a lot. So everything you do is hugely important and needs to be thought through. You need an overall plan. Luckily, the game will help you with that.

Help is at Hand

The player leaflets all have an introduction, apparently written by “an Old Advisor”, as the game calls it, on the inside front page. That explains the background of the faction you’re playing and gives you some advice as to how best to play it. Every faction also has a so-called “Year One Objective”, which is how you score points at the end of the first round, the first year. That’s another way that the game guides you and helps you understand how you should play your faction.

Crescent Moon is also very good at helping you track where you’re at. There is a year tracker and a phase tracker. As long as the Warlord, or another player, takes charge of moving these on, you always know exactly where you’re at and, most importantly, how many actions you have left before the year, or the game, ends. It’s very visual and I loved seeing where we were at throughout the game.

The map in Crescent Moon always starts pretty empty, but it doesn’t take long for it to fill up and factions to start to get into each other’s sphere of military power or political influence. Some factions ride this out intentionally, like the Sultan who happily builds their towns and cities in hexes controlled by others. Other factions aggressively spread out onto the map to take military control of as many hexes as possible. The Murshid mostly want influence in as many places as possible, so military might is only a secondary concern for them. All factions want to control the holy site though, as that gives everyone a good chunk of points.

So be prepared to gain area and quickly lose it again. There is no space for a player to turtle and do their own thing. Crescent Moon wants you to be close-up-and-personal with other players. You need to negotiate with other factions. Form tactical alliances that benefit another player just enough, but benefit yourself the most. Make the most of your pact and then choose the perfect moment to break your ties.

It’s really just glorious to watch and fun to be an active part in.

Unfortunately, it’s not all good news for the game though. I felt there was a huge barrier before you actually got to the game. The rulebook pretty much immediately introduces 6 very important terms. Until you understand the difference between tokens with military strength, civilian strength and influence, they are hard to properly understand.

There are also a huge number of actions. Many of them give you different options, while others just seem like a flowchart of conditions that you need to try and memorize. There is also important information in the rulebook, which would probably have benefitted from being on the player leaflets.

So I found myself referring to my player leaflet a lot. I also had to refer to the rulebook almost every time we had to resolve combat or an influence contest. I feel Crescent Moon is the sort of game that you have to play regularly, at least once a week, and then it probably will start to flow after 3 or 4 games. Maybe that’s just me and others are able to absorb the information more easily.

Crescent Moon puts the player in the position of one of the Middle Eastern rulers of the 10th century. You need to scheme and plan and try and control as much area as possible, whether via influence or military power, and when you play the game you definitely get a sense of all of that.

It reminds me very much of Dune by Bill Eberle, Jack Kittredge and Peter Olotka from Gale Force Nine. Yet, while Dune is set in a fantasy world, dreamt up by Frank Herbert, Osprey Games has decided that Crescent Moon plays out in the real world, in a real history. The former can distance itself from human suffering and the atrocities that come with empires expanding and conquering, as well as the concept of pre-arranged marriages. Crescent Moon doesn’t have that luxury.

The rulebook of the game says that “Crescent Moon is more an abstraction of this particular period [the 10th century in the Middle East] than an approximation.” It goes on to say that “historical accuracy and artistic freedom were ideals held in tandem with the pursuit of an experience that evokes the ebbs and flows of power, contingent even when change to the status quo seems unimaginable.”

So Osprey Games has focussed very much on a positive playing experience and not on the historical accuracy of Crescent Moon. The game intentionally creates gameplay that is removed from what actually went on in the 10th century in the Middle East, especially when it comes to the wars that were fought. After all, combat is reduced to moving wooden tokens and playing cards, then removing tokens from the board, just like many other games.

At the end of the day, Osprey Games has created a game that provides a good 2 to 3 hours of shifting alliances, constantly changing military and influence presence and lots of table talk. At the same time, Crescent Moon requires you to learn a lot of terms and rules, which means you constantly refer back to the rulebook and player leaflets as you play. However, if you persevere and put in the effort, you will be rewarded with an amazing experience. Just don’t expect to learn much about the 10th century in the Middle East.