Our heighliner was positioned safely in Arrakis‘ orbit. With a steady stream of Spice filling our coffers gradually, we had to be patient and observe from afar the goings-on down on the planet itself. It was clear that House Atreides was pivotal in the unfolding events and our scheme had to remain hidden until the right moment was reached. The cogs were set in motion and doubts had been planted in the Emperor‘s mind that would lead to their unavoidable conclusion. The Spice needs to flow on Dune by Gale Force Nine. 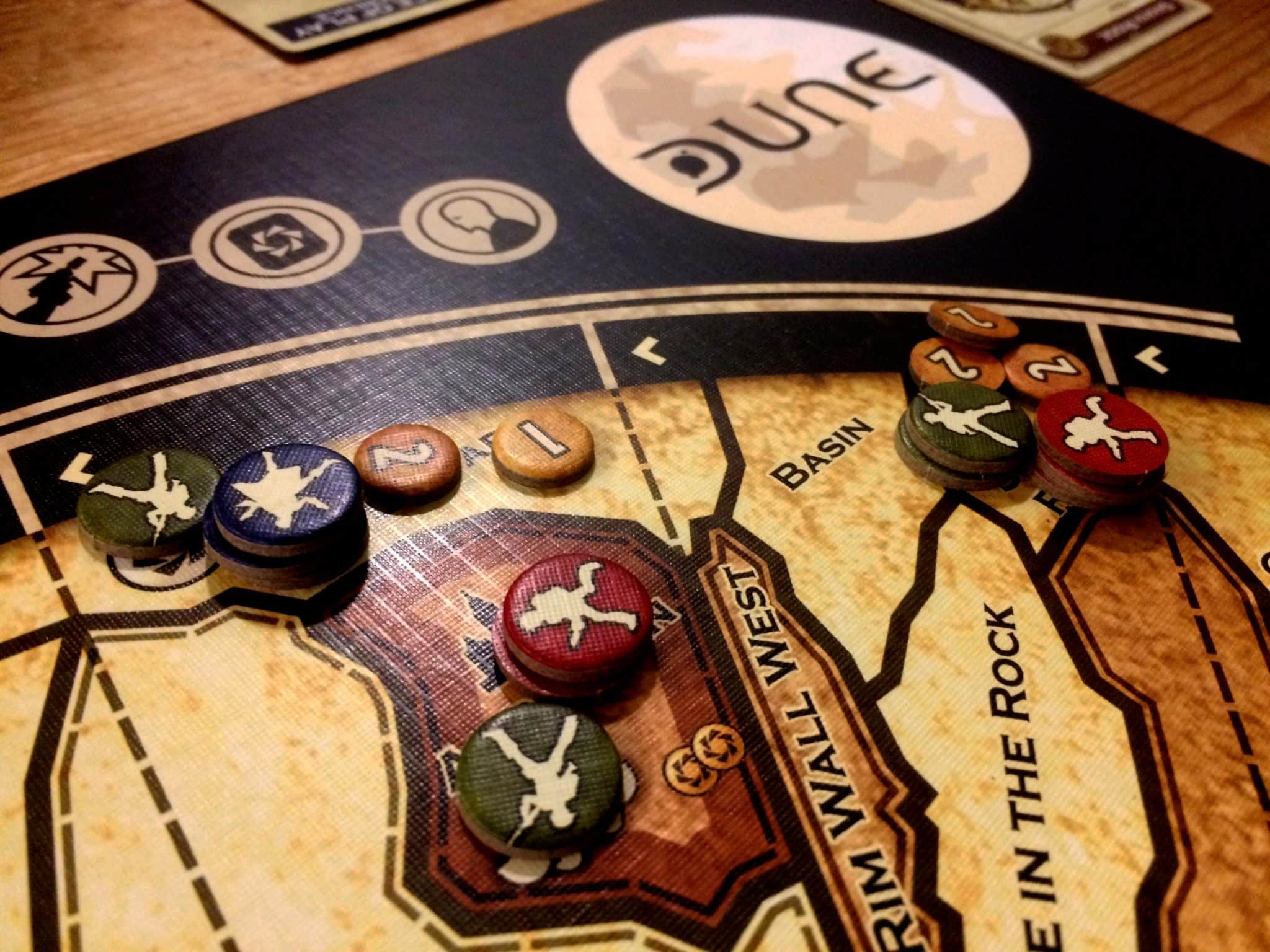 Yes, this is the re-implementation of the original Dune from 1979, which in turn is based on the books by Frank Herbert. I don’t know how much the new release has inherited from its forty-year-old parent, but even though it feels like an older game in some areas, it still works really well and has captured my imagination.

I have been looking for a game like this for a while. Dune ticks a lot of boxes for me: it has a well-known and immersive theme, it features hidden information which leads to bluffing and plenty of table talk, there is constant player interaction as the different factions fight for area control and the all-important Spice, which is tempered by the ability to form alliances, while everyone tries to reach their own, asymmetric goals. It feels so amazing to talk other players into taking certain actions or even forcing their hand by not blocking other players from winning, but leaving it up to them to occupy the relevant regions.

If you’re a fan of Dune, and even if you’re not, you will find all the factions faithfully represented in the game. You will also recognize the names of a number of important places on the planet of Arrakis, or Dune, as it is more commonly known, all of which allows you to re-enact the story told by the books, if you’re familiar with them, or the film, which most people are likely to know. In fact, during the game you rewrite the story as you try to lead your faction to victory.

The scheming that is a strong part of the story of Dune is wonderfully represented by the ability to form alliances at certain times during gameplay, as well as the continuous table talk where you try and direct other players’ focus away from your plans and towards interfering with your opponents. The asymmetric abilities are closely based on the factions from the fictitious world of Dune, with the Spacing Guild benefiting from other players deploying their troops on the planet, the Fremen having better insights into the workings of the weather and the Worms on Dune, and so on.

In fact, everything you do in the game immerses you deeper and deeper into the world that Frank Herbert created. You will feel a strong urge to get out your smartphone and play the film music in the background and want to hunker down under the table when the storm circles the planet and threatens to wipe out everything in its path.

However, there are areas that show the game’s age. I can understand that the rulebook is long and that it takes a while to learn how to play. It’s a necessary evil for a complex game like Dune. It helps if someone else has already played it and you learn only the basics and just start playing, learning new rules as you go. So that’s fine.

I also quite like that the art style feels old, just like the world of Dune itself feels very Victorian. It is in keeping with what you would expect, even though it is very brown and monochrome. So that’s fine too.

A big problem are the troop tokens that you place on the world map. They are simply too small and fiddly, which is especially problematic because you may end up having three or four factions vie for the same region. You end up with tall towers of cardboard tokens, some of which may even include advanced troops, forcing you to have two stacks of tokens per faction. I appreciate that making the tokens bigger would have required the map to be bigger as well, which would require a larger table to play the game on. Yet, if the tokens were small wooden discs and the map only a little bit bigger, it would have really lifted the game’s playing experience for me.

Another problem is the need for an FAQ. It’s great that there is one, but it also shows that the rules aren’t fully streamlined. There are quite a few situations where it is not clear from the rules alone how some actions work in a specific context or whose ability takes precedence over another. However, the re-implementation does clear up a lot of things in its FAQ that the original game left unclear, so it’s definitely a step forward.

Despite all of this though, I absolutely love Dune and can’t wait to play it again. I happily overlook the problems with the game, because the enjoyment I get out of it is huge. It’s clearly a game that you have to play many times before you start to understand it, and then many more times to begin to master it. It is very fitting for a game that is based on a saga that tells a detailed account of different families’ struggles through life over several generations. The game itself is only a small part of this story which by itself provides many hours of enjoyment and replayability.