It was unheard of, but here they were: cats and dogs working as a team. They were busily scouring the village green for toys to take home or return to the Lost & Found. It was really hard to believe and when you looked closer, things weren’t quite as peaceful as they seemed – and they were even stranger than you could imagine. The cats and dogs weren’t all working together as one big pack or clowder. No. One cat and one dog were working together as a pair against all the other cat and dog teams. They had formed an Animal Alliance by Atikin Games. 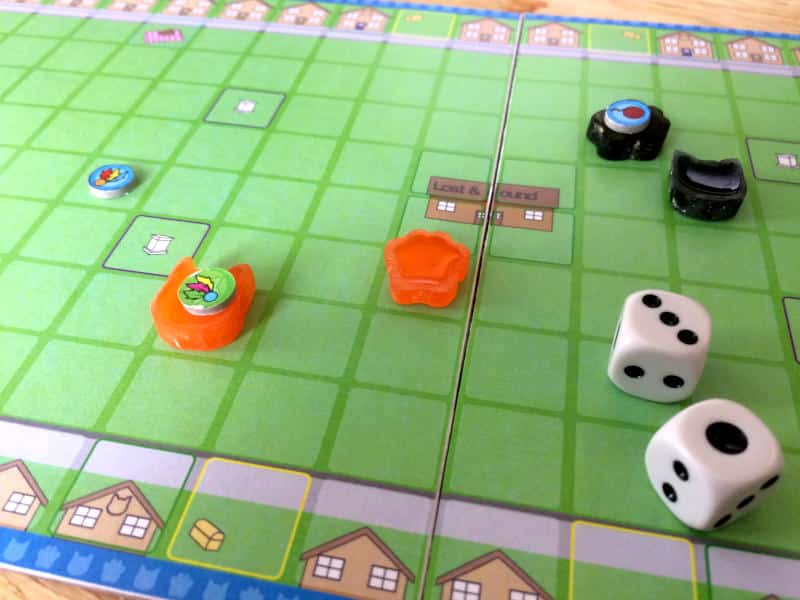 The final game in the Playful Pets series by Atikin Games is not really a separate game. It’s actually combining Canine Capers and Feline Felonies together, but then that’s not right either. If you get those two games, you still won’t be able to play Animal Alliance. Yes, you do use a lot of the components from both, Canine Capers and Feline Felonies, but the game board is not included in either of them. So, you have to get the complete box set, Playful Pets, if you want to be able to play all three games. That’s an important thing to note when you check out the Kickstarter campaign.

Animal Alliance is another competitive game of collecting toys and bringing them to safety. This time you play two characters, a cat and a dog, who work together for the win against up to three other cat and dog teams. If you have played Canine Capers and Feline Felonies, then you will be very familiar with how Animal Alliance works. It’s sort of a mix of both games.

The cats’ aim is to collect the toys and bring them back to their home at the outside of the board, while the dogs will take their toys back to the Lost & Found in the centre. Both try and convert the more basic and therefore less valuable circle toys into special and more valuable star toys. At the end of the game, whoever gets the most points, based on the number of circle and star toys they’ve brought back to safety, wins.

Like in the other two games, your cat and dog will have a number of action points they can spend, as well as a potential special action, all of which is based on dice rolls. However, because you now have two animals to play with, you roll two dice and you can decide which dice is assigned to which animal, bearing in mind that cats will not do anything useful when they roll a 1, while dogs are no good when they roll a 6. That’s really nice, because now you can give the 6 to the cat and the 1 to the dog, so that they’re both working at peak performance.

Dice rolls also decide when and where new toys are placed on the game board. You need to be careful when you put new toys out, because you don’t want another player to take the toy you’ve just added to the game. You want one of your animals to be ready to collect it and take it home.

The cat and dog can also help each other and pass toys to each other, which is useful when a toy is either nearer the edge of the board or the centre. It also means you can try and free up one animal to collect a newly placed toy when it’s their turn, while the other animal in your team delivers the already picked up toy to safety.

Animal Alliance does add an extra level of gameplay to the already wonderful Canine Capers and Feline Felonies. If you prefer cooperative play, then Canine Capers is the better choice for you, of course, but if you intend to get both games anyway, then you might as well go all in and get yourself a copy of Playful Pets, so that you can play Animal Alliance as well.

As I mentioned, the components for Animal Alliance basically consist of a different game board and the player aids for the cat and dog, which work slightly differently in this game, and you get a separate rulebook, of course. The rest of the components, the paw print tokens, the dice and the toy tokens, are all the same as they are in the other two games.

I think you should definitely take a look at Playful Pets and see if Animal Alliance is for you. I reckon it’s worth it, unless you definitely only want to play co-operatively. Atikin Games has released a great series of games with Playful Pets and I love how you can combine two other games to make a third.