There was something iffy going on in our little country village. My nose was twitchy and I was soon on the trail of some interesting clues. It was clear it was going to take some time and some clever snooping, but I was on a roll and knew I would be able to solve the Canine Capers by Atikin Games. 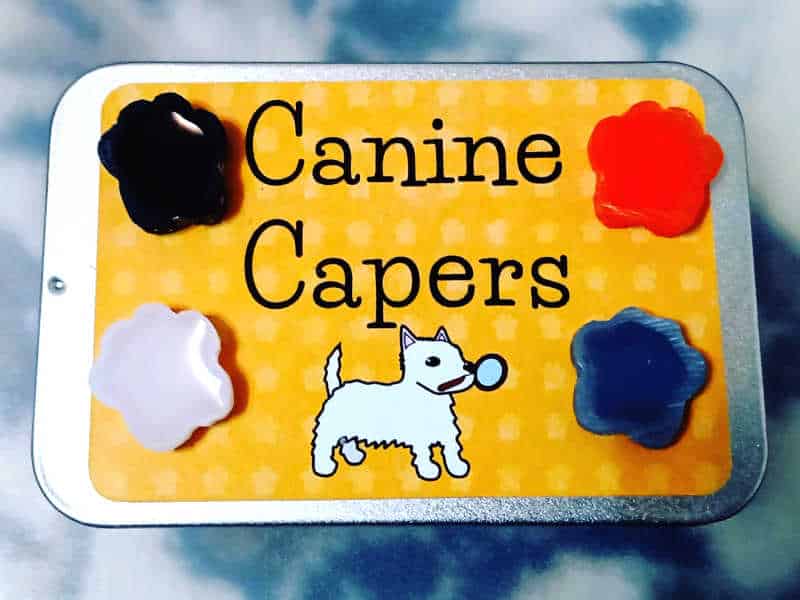 Canine Capers is a game that comes in a wonderful, standard-sized tin filled with dice, a number of cards that make up your game board, four lovely little pawprint tokens that represent your dog and many tiny circular chips that represent the clues that need to be found and brought back to the Canine P.D. HQ. You can either play solo or cooperatively with up to three other players.

The game is all about rolling dice, but as you play together, the randomness this creates doesn’t feel like a problem. Everyone starts in their dog house and as the game progresses, clues will appear on the board that you will have to fetch and bring back to the HQ in the centre of the board. Everything you can do in Canine Capers is based on action points and it’s your dice roll that decides how many action points you get on your turn. Dice rolls also give you access to special, usually one-off, actions.

So a high number means you can do more on your turn, but a lower number gives you access to more valuable special actions, balancing out the limited amount of things you can do on your turn. That is a lovely touch, because it can feel a bit bad when your dice rolling just isn’t up to scratch. At least, you’re helping the pack with your special actions – and it is very important that all players work together, or in solo mode, that you make the most of your dice rolls.

At the start of the game, there are no clues on the board, so it’s up to you and the other players to add them. That can be achieved by either rolling a 5 or 6 on your turn or by spending an action point when you’re in your own dog house. Clues come in two different varieties: circle clues and star clues. As you can probably imagine, star clues are more valuable, so you’re trying to get those on the board as much as possible. However, you are also able to swap circle clues with star clues during your turn, so all is not lost.

It might sound a bit complicated, and even though it does take a little while to understand how a turn works, every player has a little player aid that explains the special actions that are possible and how much action points they cost. It won’t take many turns before everyone will be in the flow of things and start discussing tactics. After all, that’s what this game is all about.

With every dice roll, you have to evaluate whether you’re better off staying where you are and putting a new clue on the board or whether you should try and make your way to a clue that’s already on the board and try and bring it back to the HQ. If there is another dog closer, maybe they should go there instead, but then they roll a low number, meaning that clue isn’t going anywhere fast. As I say, you’re constantly reacting to dice rolls and the situation on the board and trying to make sure, as a team, you’re getting as many star clues back to HQ, as possible.

The game gets really exciting as the pool of clues runs out. Yes, there are only so many clues available, so as you get to the end, everyone is racing back to the HQ before it’s all over and the clues are counted up. It can get a bit frantic at this stage and the pressure is on to roll high results to be in for a chance to get at least one more star clue back to the HQ.

Canine Capers is a really quick and fun cooperative game for all the family. It comes in such a wonderfully small box, that you can easily take it with you anywhere. It doesn’t take much table space either, so can easily be played virtually everywhere. It’s also really accessible to a wide range of people, making it an ideal family game. I strongly recommend you check out the Kickstarter and take a closer look at it. I reckon you will be pleasantly surprised.