Look! There’s another shiny toy! I’m going to grab it and take it home. It’s mine! Oh, I could show it off to the other cats in the neighbourhood. Then they can see my amazing new toy. It’s extra special after all. Look over there though! Another toy. I need to get that one too. All right, it’s not strictly mine, but it will be. Well, at this rate, there will be plenty of Feline Felonies by Atikin Games. 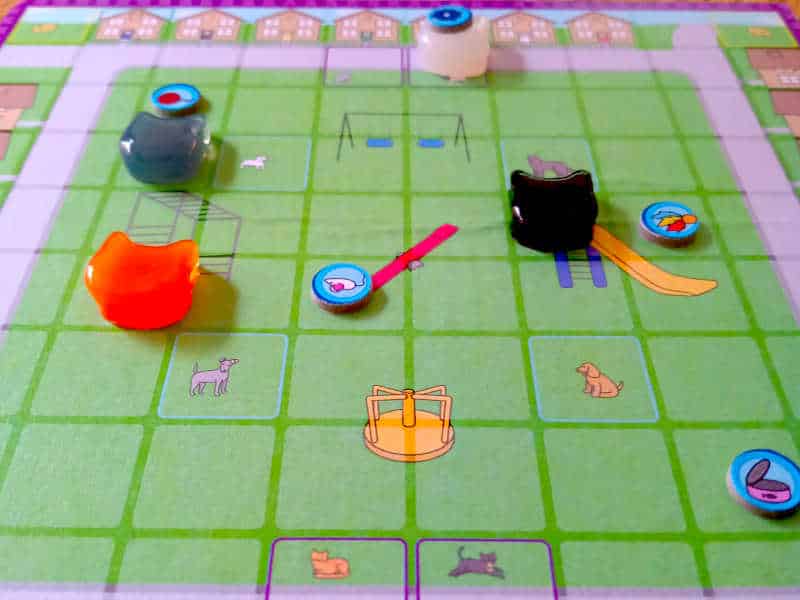 The series of mint tin games continues. I talked about Canine Capers last week, which is the sibling to Feline Felonies, and both games work very similarly. So once you know one, it won’t take long to learn the other. The difference between them is that Canine Capers is cooperative, whereas Feline Felonies is competitive. After all, dogs work together, while cats do their own thing. That’s a well-known fact – sort of.

Anyway, let me explain Feline Felonies from the start. You and up to three other players take on the role of a cat that is busily strolling around the village green and keeps finding toys that were abandoned there. Of course, your first response is to grab the toy and take it home – and that’s what you mostly do during the game. However, when you find a toy, it’s not very special and therefore won’t score a lot at the end of the game. So what you’re really trying to do is make the toy even more special.

You could flaunt it in front of other cats – or you could be cheeky and steal a toy from another player. After all, nothing is more special than a toy that you took from another cat. It’s now really sought-after, mostly by the cat you stole it from, but also from all the other cats that are controlled by the other players. It might not be a win-win, but it’s certainly a win when you successfully sneak another cat’s toy out of their paws. You just have to make sure you bring it home so nobody else can steal it back.

The whole game is about dice rolling and deciding what to do with the resulting action points, which are fittingly called “purr points”. The action points decide how far you can travel, allow you to pick up or drop off toys, as well as initiate fights with other cats to try and steal their toys. The dice results also give you access to special actions, such as adding new toys to the green. That’s actually quite an important action, because not all toys are out on the green from the start and it is up to you to add more toys as you play. The game doesn’t end until all toys have been placed on the green and taken home by one of the players.

As you probably realize, dice rolling creates a lot of randomness and luck, but I must say, that’s what makes Feline Felonies so much fun. Your opponent might be ready to steal your hard-earned toy from you, but their dice rolls might not go their way and you get a chance to run back to your own home to safely stash your prize. It’s these moments that are so memorable.

It also means that the game is very much about tactics, rather than strategy. You have to respond to what’s happening on the board and do the best you can with the dice result you have. Luckily, there are many options open to you from turn to turn, so you have many different ways of getting precious toys. You can even make another cat’s toy less valuable with one of the special actions, which is probably quite mean, but another way of helping you win.

The game itself comes in a wonderful mint tin. I’ve not yet seen the final components, but the prototype I’ve got is already very promising. Have a look at the Kickstarter page to find out more, but you will find a number of small dice, many tiny toy tokens, some resin paw prints that represent the players’ cats as well as some playing cards that make up the game board and player aids.

Being in a standard-sized mint tin makes Feline Felonies very portable and it doesn’t take up a lot of room on the table either, making it an ideal game to play while you’re out and about. It’s also fairly easy to learn and quick to play, which is perfect and will make it a family favourite.

Feline Felonies will be perfect for you, if you are hankering after some dice rolling fun for all the family where cats do their best to steal each other’s toys.