It is the evening and everyone has gone home, but you. The library is dark and everything is quiet, when suddenly, out of the corner of your eyes, you think you can see a book opening all by itself in the horror aisle. As you turn to get a better look, you see Dracula standing there, with Bram Stoker‘s book by his feet. You know exactly what to do, because this isn’t the first time this has happened. You rush to the fiction section and pull out three particular books, whose heroines will surely be able to catch the vampire and put him back in his book. The problem is, the library’s aisles are starting to shift and change and your way is being blocked but shelves. You have to be quick and find a way through this Library Labyrinth by Jessica Metheringham and Mill Goble from Dissent Games. 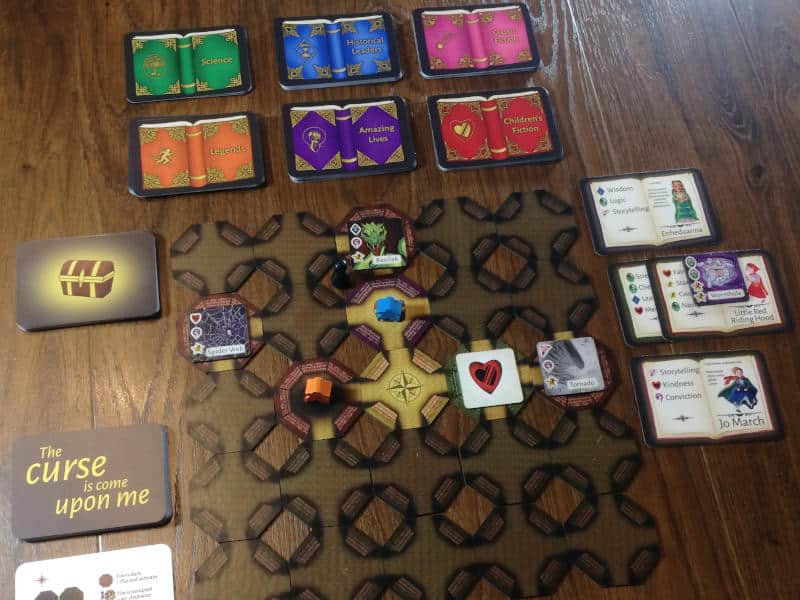 I had the pleasure of being given a review copy of this game to look at. It’s a prototype, but the rules are basically finished, except that the rulebook itself is still going through more editing. The components are also nearly done, bar the actual illustrations, so the game I am reviewing in this article will be virtually the same as the one you will be able to get through the Kickstarter campaign.

The only thing that’s still being worked on is the solo mode. The review copy suggests that you will either be able to play the game by yourself, using the same rules as you would with multiple players, but there are also ideas for a specific solo mode that will give you some additional things to do. Library Labyrinth is a co-operative game, so it makes sense to use the same rules when playing alone as you do when you play with 2, 3, 4 or even 5 players. We’ll have to wait and see, but whatever the production copy will come with is going to be exciting.

Like many other co-operative games, Library Labyrinth uses a deck of cards as the game’s timer. After every player’s turn, you draw a card from that deck, follow its instructions and then it’s the next player’s turn. When the deck runs out, the game ends and you lose. So far, so simple.

Library Labyrinth also mimics other co-operative games with regards to players’ actions. On their turn, every player can carry out three actions from a list of possible actions. Players can take the same action multiple times, if they so choose and they can take actions in any order. Again, this is nothing new and if you’ve played some of the popular co-operative games in our hobby, you will be very familiar with these concepts.

There is also a set collection element in Library Labyrinth, which you may know from other famous co-operative games. So, once more, the game follows concepts that other games have used to great effect.

Additionally, none of these mechanisms are hard to understand, so even if you’ve never played a co-operative game before or if you’re not familiar with modern board games, you will quickly understand how they work and what’s expected of you.

However, there are a few things where Library Labyrinth differs and that bring the game to life and make it stand out from other games – but let me start by explaining how the game works, before delving into what makes Library Labyrinth so different and exciting.

First of all, everyone starts in the centre of the dark library. During setup, you will have shuffled a set of 24 tiles to make a face-down 5×5 grid, with the starting tile in the middle. All you know is that there are a certain number of monster tiles, bonus tiles, shelf tiles and empty tiles in the mix, but you have no idea where they are. So one of your first tasks is to explore the library and discover where they all are.

Your next challenge is to reorientate the tiles you discover to make continuous paths that you can walk along. After all, the library has indeed become a labyrinth with tiles being a mix of corners, t-junctions and crossroads. So even if you reveal a monster, called a terror in the game, it doesn’t mean you can get to it.

To win the game, you need to draw character cards, which come from six genres of books and each of which will have a mix of symbols matching some of the six genres. These cards represent the heroines of actual books from literature and their skills will allow you to capture the terrors. You just have to match the symbols on the character cards to the symbols on the terrors and then you can go and catch them.

Your ultimate aim is to put the terrors back into their books and again it’s about matching the genre symbols. Every terror will have a mix of genres they represent and there are six genre shelves somewhere in the library. If you can return a matching terror to each of the six genre shelves, you win.

That doesn’t sound too difficult, but there are a few obstacles, of course. First of all, if there are ever 5 or more terrors visible in the library, the game is over and you lose. You also lose when the timer deck runs out, as mentioned above. You also have a hand limit of 6 cards – or rather card slots – and this is the first mechanism that I really love in Library Labyrinth and that I think makes it stand out from other co-operative games.

Whenever you capture a terror, you stack together the character cards and the terror tile and now they only use up one of your 6 card slots. So using 3 character cards to catch one terror isn’t actually such a terrible thing, even though it is slightly wasteful. However, it also means that you now have 2 extra card slots available to draw more character cards.

The other challenge you face is in the form of the curse. It is represented by a black pawn that circles along the edge of the library and will randomly rotate tiles, flip face-up tiles face down again, or vice versa or it will reveal new terrors. The curse does its thing after every player’s turn. So if you already have 4 terrors in the library, the curse might kill you by revealing a fifth. The curse might also rotate a tile in the library, blocking your path to get to the terror or shelf you desperately need to get to, in order for you to have any chance of winning. The curse creates a lovely moment of randomness that will keep everyone on the edge of their seats.

There are also bonus cards in the game that give you one-off special abilities or that can boost your character cards, enabling you to catch terrors more easily. There is also the option of taking one less action on your turn and giving it to the next player. All of this creates a lot of flexibility and adds to your options and might mean the difference between victory and defeat.

Overall, Library Labyrinth is quite tough. We’ve not yet beaten the game, but you can adjust the library tiles and remove terrors and replace them with blank library tiles to make it a little easier – or you can add more terrors and remove blank library tiles to make it harder. So you can really cater for the level of difficulty that is right for you. Personally, though, I like the difficulty that the standard setting provides. You know you can do it, but it’ll take you a good few games and a little bit of luck to win.

As a final, but possibly the most important note, I wanted to mention that Dissent Games have promised to give 10% of the profit of the game to charities or campaigning organisations that raise up women. Now, we’re talking about profit here and the publisher is quite up-front about saying that they don’t expect to make much profit, but it’s still great to see. The publisher is even asking for suggestions of what charities or organisations the donations should go to. I think that’s wonderful and makes this game even more special.

So, as you can probably tell, Library Labyrinth is a co-operative game that’s really easy to learn and does a lot of things you’ll be familiar with from other co-operative games, while at the same time adding lots of little extras and new mechanisms that make this game stand out and keep it interesting. I bet you will become addicted to the game after a single play. Just like a good book, you won’t want to put Library Labyrinth down again.