You’re on the phone to the real estate agent talking about this great piece of land near a school and park, which would be ideal to develop into modern housing. At the same time, you see an email from a small local business owner who is interested in renting one of the units in your newly built office complex. Things are going really well for your growing empire, but you also realize that property prices are at an all-time high. The big crash isn’t far away now – you can feel it. It will be crucial to sell everything at the right moment and make the most profit. However, if you leave it too long, you’ll lose it all and destroy your chance of becoming the greatest magnate in history. 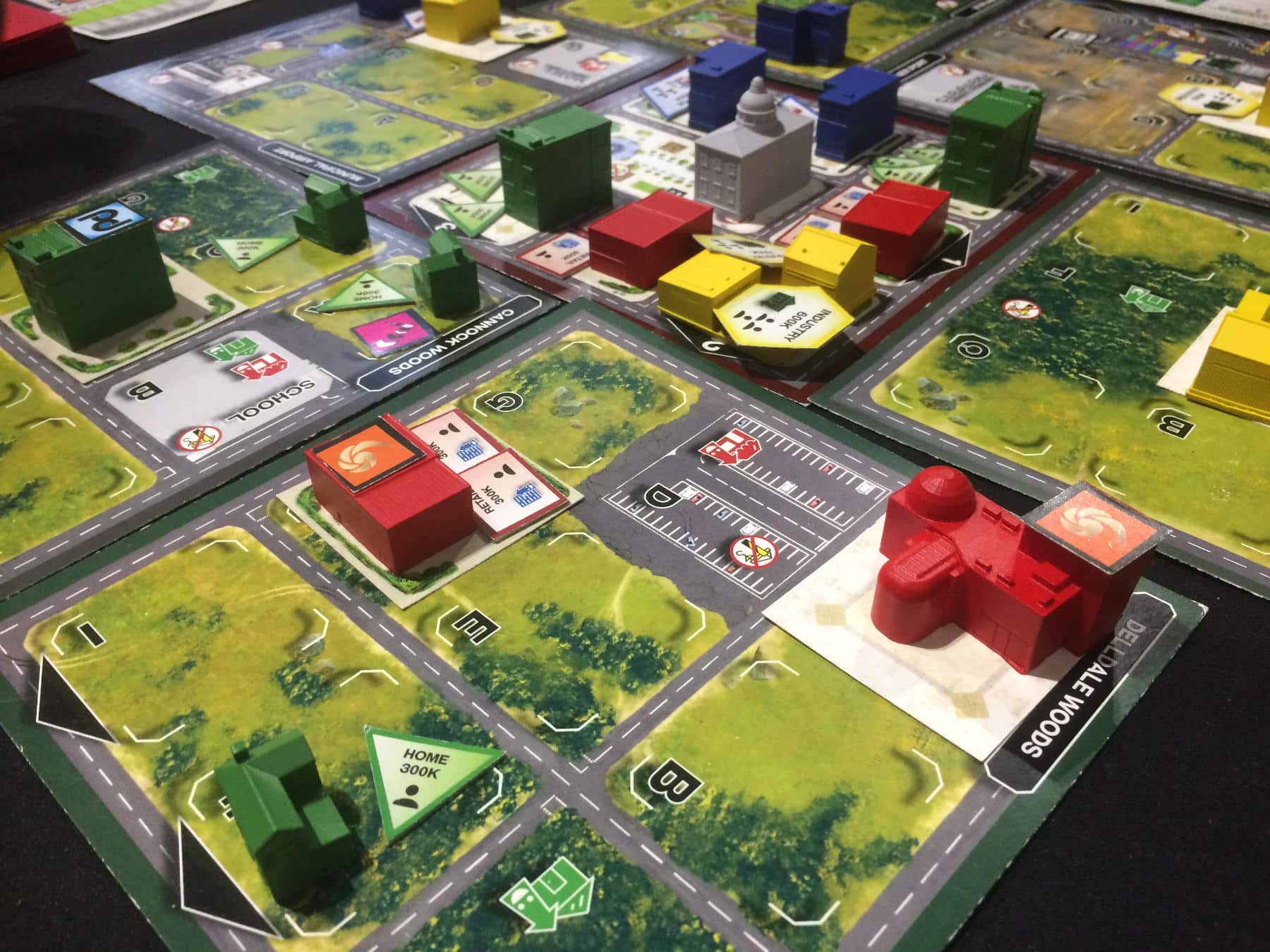 Magnate: The First City by Naylor Games is an economic simulation all about buying land, building property, attracting tenants and making the most cash before the whole market collapses and you stand to lose everything. The game seems very daunting and complex when you first look at it, but after two turns you start to formulate a strategy and feel like you’re making meaningful decisions. In fact, you realize how important your decisions are. You have to decide when to buy land, build property, or whether to wait for tenants to move in, who give you a regular income, which will allow you to buy more land or build bigger buildings – or whether you sell the land now so you can snap up prime land that would otherwise be bought by your competitors.

The rules for Magnate are actually quite simple, even though you have several choices on your turn and there are quite a few things to do at the end of a round after everyone has passed. However, these simple mechanisms create a lot of subtleties and nuances that you need to consider. The game gives you a real sense of being a property developer within a small framework.

There is also a certain amount of luck in the game, which either applies to everyone, like the risk of when the crash will take place, or there are ways for you to mitigate it and increase your chances of success. Yet, it is exactly these elements of chance that create excitement. You are constantly betting on when the crash might happen – and it will happen eventually. You are never sure if you will be able to attract enough tenants to your newly built properties, and therefore you can never fully rely on a steady income to finance your next building phase.

It is also your options for mitigating the risk that create another level of excitement. Towards the end of the game, you can try and really push for the market crash, selling your land like there is no tomorrow, in the hope that you trigger a panic sale in your competitors, which will speed up the crash even more. Yet, you can also be the one who keeps their nerves and invests in a cheap market, making an even bigger profit when the crash does come.

There is a huge amount of variety in the game. The central game board is modular, allowing for different configurations which will require slightly different strategies. What plots of land become available for purchase is also randomly selected, meaning you have to be quick to snap up the best offers. So no two games are likely to be the same, giving you a huge amount of replayability.

I really couldn’t believe how well the game emulated the real-life property market – or at least how it is portrayed on TV and in films. There is a huge social element in the game as well, as you try and read your opponents’ expressions and interpret their decisions, hoping that you can learn of their plans and capitalize on this knowledge. The gameplay of Magnate alone really gripped me and in my view is the first economic simulation tabletop game since the 80s.

Add to that the amazing components of the game. I had the pleasure to play with the prototype components, which were absolutely stunning. So I can only imagine how breathtaking the final product will be. The miniature buildings that you place on the board as you build your properties not only feel substantial in your hand, they also look great and are highly detailed. It creates an amazing visual presence that is fitting for a game all about building properties. The board soon fills up and a small town rises up in front of your eyes.

I can’t say enough how much I’m impressed by this game. I can’t wait to back it on Kickstarter when it goes live in September of this year. James Naylor and the team have really put in a lot of effort and huge amounts of time playtesting the game to make it the best game it can be. Magnate: The First City will start a new trend of city-building games, but we’ll have to see if any of them will reach the level of excitement, enjoyment and entertainment that Magnate creates. The bar has been set very high indeed.