The price bubble has burst and the property market has crashed. People have lost a lot of money when they were forced to sell everything at a much lower price. They bought too high and got out too late. Yet, there are also a number of happy faces around the table. They bought land when prices were still extremely low, built properties, rented them out, earned a decent income and then sold everything at the peak of the market – or at least sold most of it, breaking even with everything else. These are the property tycoons that managed to make it big in Magnate: The First City by Naylor Games.

I reviewed Magnate back in June this year (see my Saturday Review Magnate: The First City), after I had played it at UK Games Expo. So in the first of my Takebacks articles I take another look at the game to see if my opinion has changed, or if the game itself has had changes made to it. 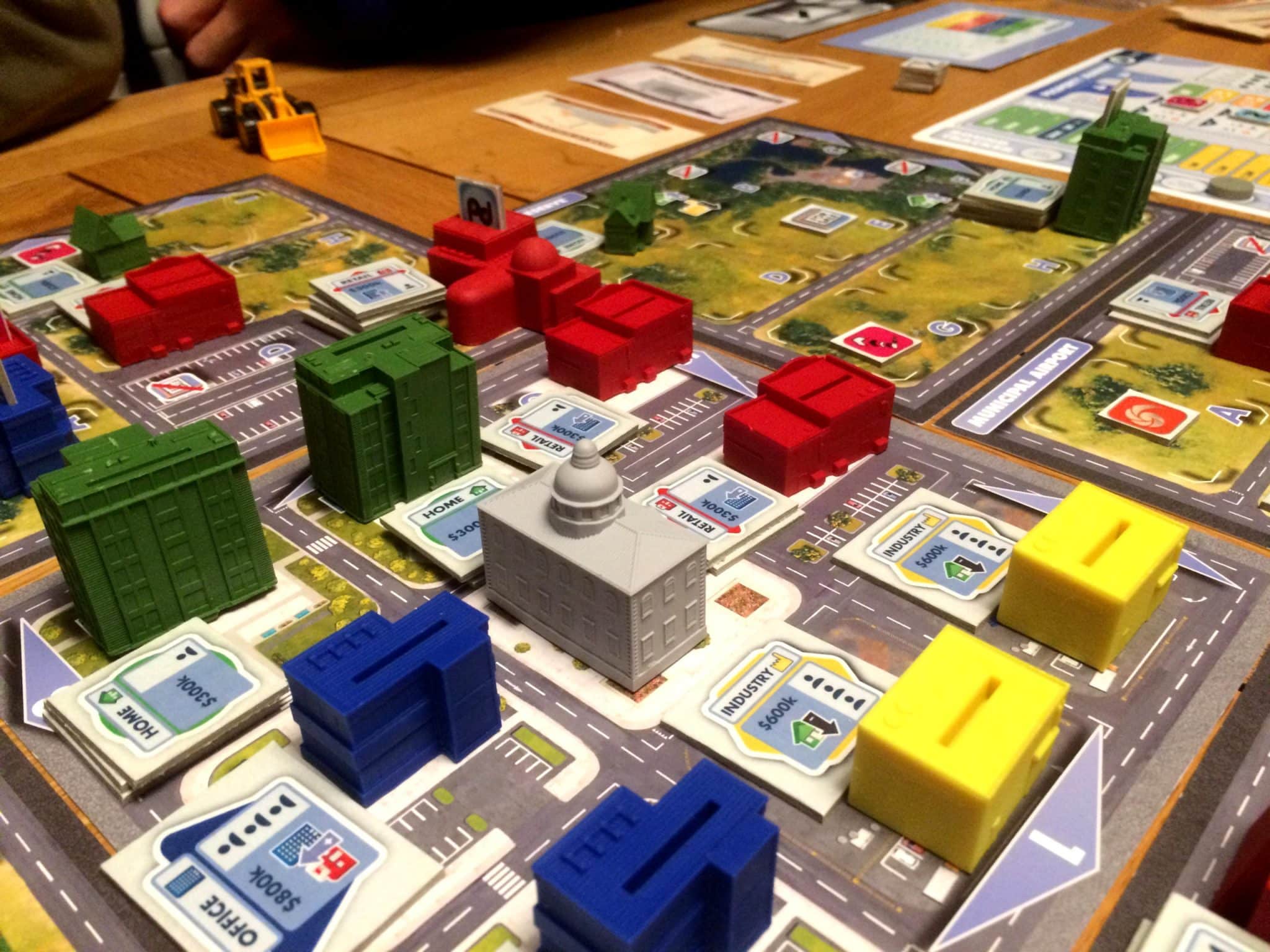 Having a game demoed to you at an expo is quite a different experience to playing it with friends. The demo at UK Games Expo was an actual full, four-player playthrough, so I got to experience the game from start to finish. I felt learning the game was relatively easy, despite how complex Magnate looks at first. You really learn as you play and by the second round you make meaningful decisions, even if you’re still unable to formulate a full strategy.

My friends had the same experience when I taught the game to them. With only a couple of pointers they were able to buy land in suitable locations and build properties that would benefit most from that in the first round. Once they saw how a whole round played out and learned a couple more housekeeping steps, they knew what they were doing in round two and there were only a couple more questions from then on.

So even though Magnate looks very complex, its rules are actually very simple. You only have so many options on your turn and you only have three turns in a round, so there isn’t too much you have to worry about. The housekeeping can be a bit involved, but even those steps are very procedural, so as long as you follow it along step by step, you will be fine.

One thing that is really different in Magnate, compared to other games, is the importance of being first player. Like in most games, being first player will be more crucial to one player than to others from round to round. However, in Magnate, it is a lot more intricate. First of all, when bidding for becoming the player to start the round, you may come up against other players trying to bid you up and bleed you of money. That in itself is an interesting level of player interaction, because if you go up too high, you end up paying through the nose and then can’t afford anything else, but if you don’t bid enough, you may lose out on the important plots of land available for sale.

However, the importance of being first player doesn’t end there. When it comes to attracting tenants, who goes first will influence how easy or difficult it is for others to increase their rental income. You may want to be first to fill up your industrial plant which you conveniently built to push down the value of residential housing in the area. So if you go last, others can still get their housing rented out, before you get a chance to make it harder for them.

In fact, I think the biggest amount of player interaction comes from the first two, seemingly small and innocent, steps at the beginning of each round: bidding for first player position and attracting tenants. Here you wield real power over other players, as well as decide your own future. Sure, your other steps in each round are important too, because you will have to lay the groundwork of buying plots and building properties before you can even think about filling them with tenants, but there are many situations where you want to be the first player, or even more interestingly, you don’t want someone else to be first player.

For the same reason, attracting tenants into your properties may start out to be all about gaining rental income that you need to invest into buying new plots and building on them, but as the game progresses, it becomes more and more about getting yourself a strategic advantage and reacting to what other players do. If you are able to have lots of offices and retail space near your residential properties, then you’re doing well. You can even benefit from others placing these beneficial buildings nearby. On the flip side, you can also save a plot until others have built their properties nearby and then plonk a big old industrial complex onto the empty plot and ruining everyone else’s chances of bringing tenants into their shiny buildings.

As you can probably hear in how I describe all of these interactions, I still love Magnate as much as when I first played it – if not a bit more, because I have been able to play it with my friends, all of whom liked it a lot. The game really ticks all the boxes for me.

Of course, there are things that have changed since the demo at UK Games Expo. The buildings at the time were already great quality, but they have been tweaked and improved since. Simple things like having a slot at the top of each building to allow you to insert your player token, thus claiming the property as yours, has made a huge difference.

The paper money that is now supplied with the game is also much better, with different denominations being different sizes and the quality of the paper itself really adding to the feeling of luxury – and excess. I know some people prefer poker chips when playing games with money, but I think you should try the paper money in Magnate before dismissing them outright.

The rules themselves have also been tweaked slightly. I think now the end of the game works better. Panic selling no longer necessarily leads to a crash of the market and the game end. There is still a good chance that there will be another round, so hanging onto your properties a little bit longer can easily give you a much bigger profit.
In fact, the whole game is much more refined now. That is understandable, given that the demo was played with a prototype, be it a very high-quality prototype, while I have now played it with a near-to-production copy of the game, where the layout of the player aids and market price track and everything else has been improved and made much clearer.

In short, I will not invoke my right for a takeback on my previous review of Magnate: The First City. In fact, I stand by my decision, which was the right one at the time and will bring victory. I can only recommend you make the same decision that I have made on my turn.