My last board game convention was AireCon 2020 and it was the last event of its kind in the UK. As it turned out, there wasn’t going to be another in-person UK board game convention until 2021. It was a wonderful event, even though everything felt weird. Nobody was sure whether to shake hands or not. The special guests who had flown in from the USA weren’t even sure if they would be able to get back home. Luckily, they did make it back safely and it wasn’t long until the UK went into full lockdown. So, I was keenly looking forward to AireCon 2022, the first board game convention I was happy to attend after a two-year break. 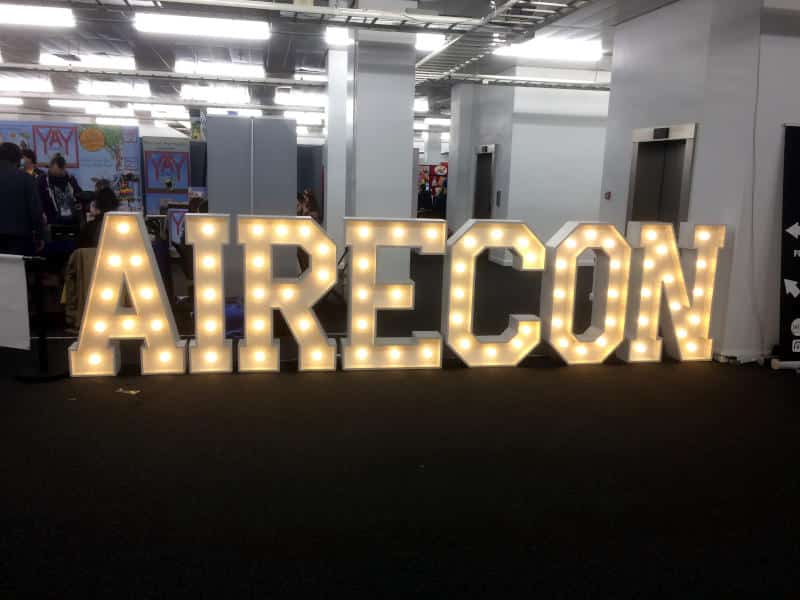 Let me start by saying that the organizers did an amazing job trying to make everyone feel safe. Entering the convention required a valid COVID pass or negative flow test. Everyone had to wear masks unless they were sitting down and playing games and, of course. There were exceptions for people who were exempt from masks, who relied on lip reading, etc. There were plenty of places where you could clean your hands with sanitizer. There was plenty of ventilation and I feel that everything was done to make everyone feel comfortable and safe.

So, I can only praise the team for their great work.

AireCon is an event that’s focused on people playing games together. That’s how it started and that’s what it still is. Yes, there is a number of exhibitors showing off their games or other products. There are also events throughout the weekend that aren’t all about playing, but there is a lot more space and time dedicated to the playing of games. I don’t know what the percentage footprint is of open gaming tables versus exhibitor stands or the percentage of time that AireCon offers to play games compared to the time for events or the exhibition space being open – but I reckon it’s hugely in the favour of playing, probably in the range of 10:1.

Generally, the event felt a lot busier than previously – but not in an overwhelming way. It seemed like everyone made a pilgrimage to AireCon this year. It was as if everyone was ready and couldn’t wait to see people in person again and enjoy playing physical board games together once more. It just had been too long since we had been able to congregate and have a wonderful time together.

Despite it being so much busier, twice as busy as 2020 according to some of the exhibitors I spoke to, there was always room to sit down and set up your game, whether you were there with a group of people you already knew or were still looking for more players to join you and make friends with. It was so great to see so many happy faces at the tables, playing a huge variety of games. People had brought their own games with them, some had hired them from the on-site games library and others had just bought a game from an exhibitor or from the bring-n-buy sale.

On top of people organising their own game sessions, there was a dedicated family zone. It was run by the wonderful Imagination Gaming team and looked really busy throughout the whole weekend. Lots of happy kids getting excited about playing games, as well as families discovering new games and enjoying quality time together.

Personally, I saw a lot of people I know from social media. It was so great to finally see them in person and chat with them face to face. There were publishers, designers, illustrators, press and many others from the hobby. Everyone was just as lovely and friendly as I knew them from their tweets, DMs and other social media interactions. It was such a huge pleasure to spend time with them during the event. I think that’s one of the main draws for me to go to AireCon, despite it being a 5-hour drive for me each way. Seeing all these wonderful people and chatting with them is so rewarding.

Of course, it was also wonderful to finally meet Rodney Smith from Watch It Played in person. When he spotted me, he came over to say hello and give me a hug. It felt as if we’d known each other for ages. He was so warm and welcoming and even though he didn’t have much time until the next event. He didn’t rush and took his time to have a quick chat. I also saw him during the Str!ke tournament on Saturday. Yes, he did a great job making everyone feel comfortable and ensuring we all had fun playing this really fun game.

It was also great to see Paula Deming again, even though only briefly. I was lucky to play a game of Arraial with her in 2020 and she had been really kind when she recorded a little jingle for Tabletop Games Blog Radio, so I wanted to thank her by giving her a Tabletop Games Blog t-shirt. She was just having a bite to eat between the many events she was part of, so it was just a quick hello, but it was lovely to see her.

The whole Watch It Played team was at the event and everyone was always happy to have a chat with people. So as I was walking around the show, I regularly saw happy fans talking to Rodney, Paula, Matthew, Chaz, Monique or Navine, taking selfies and just having a great time.

Generally, walking around AireCon, everyone seemed to have a great time and it was clear that the organizers tried to cater for as many requirements and needs as possible. Like every year, there were dedicated accessible gaming tables as well as a quiet gaming zone, if you needed to get away from the noise and people and have a bit of a quieter time to enjoy the hobby. If the event was getting too much for you, there was also support at hand in the Roll Through It area, where people were on hand to try and help you with anxiety or if you were otherwise getting overwhelmed by the number of people or for other reasons.

So, as I mentioned before, AireCon really did everything they could to make the event as comfortable as possible for anyone and everyone.

Now, I cannot end this article without mentioning the amazing charity work that AireCon does every year. Apart from the raffle, which takes place every year and which did amazingly well this year, running out of raffle ticket books about half an hour in, there was also a dedicated pay-what-you-want games sale in aid of Disasters Emergency Committee (DEC) – Appeal for Humanitarian Aid in Ukraine. It was great to see AireCon do so much to support so many great causes.

The raffle was in support of The Wren Bakery, an enterprise using baking and coffee as tools to give women who experience disadvantage, opportunities towards employment, and UNHCR – The Refugee Charity, whose work includes launching special appeals during emergencies, as well as projects to help refugees rebuild their lives, such as through education, livelihoods and healthcare, and it raised over £5,500, split equally between the two charities.

The pay-as-much-as-you-want games sale raised over £8,000 and will be donated to DEC – Humanitarian Appeal for Ukraine.

So this is another opportunity to appeal to everyone who reads this article to consider donating to those charities yourself or trying to find ways to help however you possibly can.

Overall, AireCon was just amazing and even though the journey there and back was long for me and I was rather exhausted afterwards, it was also hugely rewarding and so much fun. I felt so re-energized to know that our hobby is so great and the majority of people are wonderful, welcoming and friendly. I can’t wait to see you all again for AireCon 2023.

Here is a short video giving you some brief impressions of the event: