It feels like a long time ago now, but thinking back to AireCon, which took place last month, still puts a smile on my face. It meant a long car journey for me, travelling over five hours from the South Coast all the way up to Harrogate in deepest Yorkshire. I started early, around 6am, on the Friday, because I was aiming to get there by lunchtime. I wanted to see a few people who were going to be there – one of my wonderful Patreon supporters, a game designer who I got chatting to on Twitter and who was demoing his new game at the event, a more established game designer who I was hoping to arrange an interview with, as well as the board game “celebrities” who had made their way from across the pond. It was going to be busy. 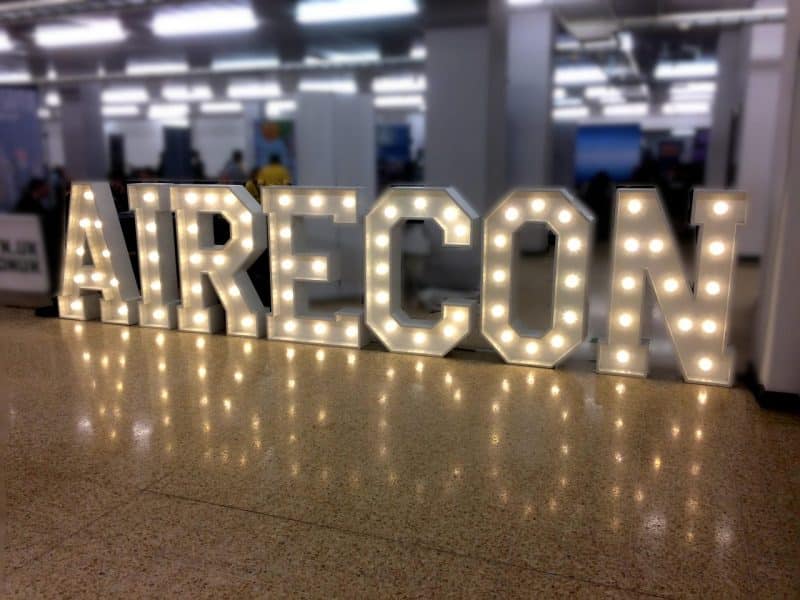 I arrived at the Harrogate Convention Centre relatively fresh and awake. I was too early to check into my hotel, so I parked my car in the nearby car park, put on my Tabletop Games Blog hoodie, took my notebook and press ticket and made my way to the convention, which was literally two minutes’ walk away.

I was first greeted by the friendly AireCon staff in their yellow t-shirts, who quickly sorted out my press pass – and then I was greeted by the now-famous AireCon letters, that beckoned me down the steps into the main hall.
It was immediately clear that this was an event all about playing games, that happened to have some exhibitors alongside. There were plenty of open gaming tables lined up in long rows, with many people already playing games, but still plenty of space for more people to set up their own games.

I decided to work my way around the exhibitors first, just to help me get my bearings. The stands were basically a combination of some tables and chairs and maybe a banner or two, giving it all a very informal and friendly feel. I clearly didn’t notice a number of people on my first walk around the stands, which I regret, but I seemed to have gone slightly people blind. It was actually really busy and the exhibitors had lots of interest in their products.

Yet, I did notice Sally Jones of The Crafting Jones, and how could you not, as well as Tom Lovewell of Redwell Games, both of whom greeted me warmly. As I continued my circuit and went around the exhibitors for a second time, I spotted Robin Kay of Ruined Sky Games, whose game Circulari was available for demos, including the new solo mode that he had recently developed to a point where it was ready for people to try out. I also saw Scott Snowden-James of Minerva Tabletop whose game was recently rebranded as Swatch and had a new art style applied. I had booked a demo session with him on the Friday morning, so was looking forward to speaking more with him then.

There were many more exhibitors of course, including Oink Games, whom I would be visiting the next day to try out Deep Sea Adventure – and then buy a copy of it, of course, along with Nine Tiles Panic. However, I was mostly here to play games.

So I headed over to see Minerva Games where Scott demoed Swatch to me and a couple of other attendees. It’s a great game that is really easy to learn, but has plenty of complexity and thinkiness to keep even heavier gamers entertained. It’s the sort of game where you play a couple of turns and have an “a-ha” moment as you realize how the game works. However, as you play more rounds, you will have a second “a-ha” moment as you see the extra level that this game offers and which makes it such an interesting game to play.

After I finished the game, Bez Shahriari of Stuff by Bez asked me to join a playtest session of Seize the Power designed by Tiz Creel. The game is an asymmetric game about aliens with different privileges trying to improve their situation and make the best of life. The theme is great, but what makes this game so much fun is the table talk. Every player has personal goals, which translate into victory points, and which require you to help others. So a lot of the time you’re bargaining with other players, offering them help or hoping to call in favours. Alliances are formed on one turn, only to be broken on the next. Promises are made, but then not necessarily kept. It was so much fun to play and I hadn’t laughed that much in a long time when playing a game.

The next day, Saturday, I went to see Robin at Ruined Sky Games, because I had run out of time on Friday. I wanted to try out the solo mode of Circulari. It took me a couple of turns to remember how it all works, but it’s a game that is really easy to teach and learn. The complexity arises from the gameplay, which is very thinky and a real brain burner. Now, I’m not a solo player, but the solo mode of Circulari is really great. Every turn you turn over a card from a shuffled deck to reveal a different bonus that will make one of your actions more effective. So rather than playing against an artificial opponent, you try and play the best you can. I really enjoyed it and can’t wait for the game to come to Kickstarter – hopefully later this year.

Afterwards, it was time for a game of Arraial with Paula Deming of Things Get Dicey fame, amongst many other things of course. I had never played that game before, but it was great fun and is now on my wishlist. As we played, Matthew Jude of the Death by Monsters podcast, Emma of the Pointless Parrot Podcast, Ross of More Games Please and Dave Luza of the This Game is Broken podcast joined us for a game of QE, which I also had never played before, but always wanted to. It was a lot of fun and I nearly won, but of course, ended up betting a little bit too much on the last auction to be out of the game. It was great.

It was soon time for me to head home. I couldn’t stay the Sunday unfortunately, so I used my last half an hour to speak with Dávid Turczi about Excavation Earth, the upcoming Kickstarter project due to launch on Monday, 6 April, and trying to arrange for him to join Antoinette of Board Game Inquisition and me on our Tabletop Inquisition podcast. It was lovely speaking to him and seeing his enthusiasm for his latest game. You’ll have to check out our interview with him, which is scheduled to go live this Monday, the same day as the Kickstarter. He told us all about how he approaches game design in general and solo modes in particular, as well as all the games that he is working on at the moment.

After that, it was time for me to say good-bye to AireCon. Thank you to Mark Cooke and the team for putting it all together. It was so nice to be surrounded by so many wonderful people from our community. I left with a huge smile on my face and felt reassured that there are a lot of friendly and positive folks who all share a passion for playing modern board games.