“Hm. Deep Purple looks good. Life’s A Peach is also very warm and rich. Oh, and of course, we want the Cactus Jack. That would be the perfect triad of colours.” You step back and look at the colour samples you just painted onto the wall in the kitchen. “Yes, that’s it.” You’re so pleased to have come up with this perfect colour scheme. It had been harder than you had expected. Mixing the 13 cyan, 14 magenta and 15 yellow in the right combination had been a bit of job, but the result was more than worth it. “Yes,” you say out loud, “that’s the perfect Swatch by Minerva Tabletop.” 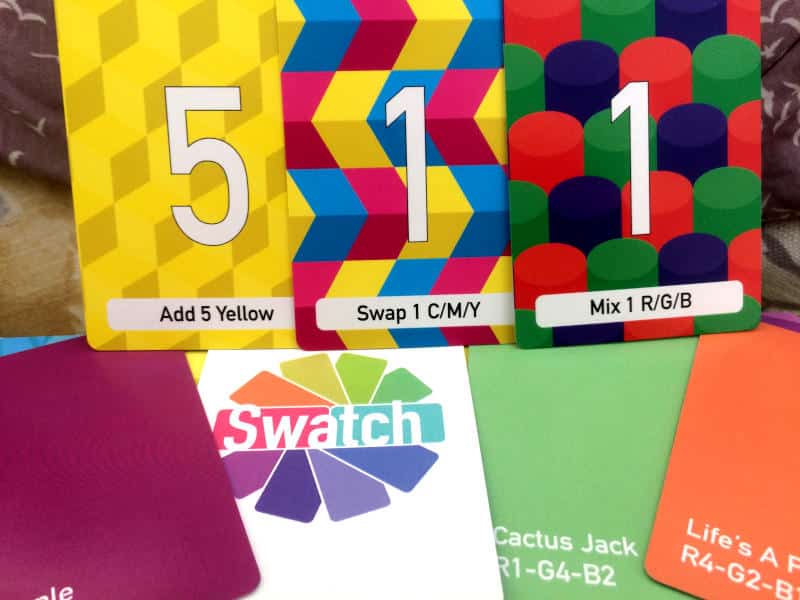 However, don’t let me spoil all the wonderful swatch names you can find in the game. They are very creative and some of them will definitely make you smile. Yet, the game isn’t about the names so much, but about managing your base colours, cyan, magenta and yellow, so that you can mix them into the right amount of red, green and blue to then mix the final colour swatches that you need to end the game. It is even more about deciding which card to take from the active row of cards and to manage your hand carefully, because the cards are the actions you can take on your turn.

It sounds a bit confusing, and for the first two or three turns in your first game you’re not quite sure what you’re trying to do, but very quickly it all becomes clear and you start to add the base colours to your resource pool, mix them into red, green and blue, so that you can eventually take one of the swatch colours, who are named so imaginatively – and once you got the correct three swatches, the end game is triggered.

It’s the usual fare of taking the right cards to get the resources you need and to mix them at the right time and in the right amounts to get closer to your goal. The twist is that turn order isn’t fixed in Swatch and depending on which card you take from the active row of possible ones, your position in the next round will be different. A really good card near the end of the row means you go later in the next round, so sometimes it’s better to take a worse card, but ensure you get first pick from the next row – and you can always see two rows of cards ahead and therefore can plan ahead and play quite strategically.

However, the other players will have similar thoughts and once you have played the game a few times, you will start to look at what everyone else is doing and try and stop them by taking the cards they need, even if they don’t benefit you quite so much.

So the player interaction in Swatch is quite high because of this and there is even a card that allows you to swap one of your colour cubes with either the pool of resources or another player, which again gives you the opportunity to slow them down. The game goes one step further by offering four slightly different variants of each swatch colour, so when two or more players need the same colour, the first to get it will force the other players to readjust their planning to cater for the slightly different colour requirements.

So even though the three offer rows create a lot of randomness in Swatch, everyone can see the next two rows, allowing everyone to plan ahead, and if you’re the last player in one round, you can actually skip ahead a row and reserve the card you need. Sure, you lose a turn, but that might actually be most beneficial to you.

So Swatch really encourages formulating a rough strategy and wants you to plan ahead. Its randomness is completely overshadowed by the level of player interaction and the ability to plan ahead.

There is one more twist in the game though, which I really love. The game doesn’t just end when someone has got the three swatch colours they need for their scheme, which is basically the game objective. Instead, the game continues if that player still has colour left in their hand. The other players carry on taking their turns for as many rounds as the player who got their scheme completed has colour cubes and discs left.

So if you’re a bit too greedy and hoard lots of colours and get your three swatches very quickly, you can still lose the game if someone else completes their scheme, but has less colours left than you. It really forces you to plan ahead a lot to ensure you use your actions effectively and efficiently. It’s absolutely brilliant.

I also love that this game is the debut for the designer who is publishing this game himself through Kickstarter. I think it’s amazing and he deserves your support. I certainly have my name down to get my own copy and hope you join me.

CORRECTION: In the game you take cyan, magenta and yellow to mix red, green and blue, which you then use to get a swatch colour – not the other way around. The written article has been corrected, but the audio is still wrong.