You were proud of your large library and your hard-working group of scribes was continually adding new tomes, with wonderfully decorative lettering and illustrations. However, you only had so much gold and the best scribes weren’t cheap, but you had to somehow continue growing your collection of books to keep the bishop happy and outdo other abbots who were vying for influence. So you persevered and did what you could to have the most Biblios by Steve Finn from iello. 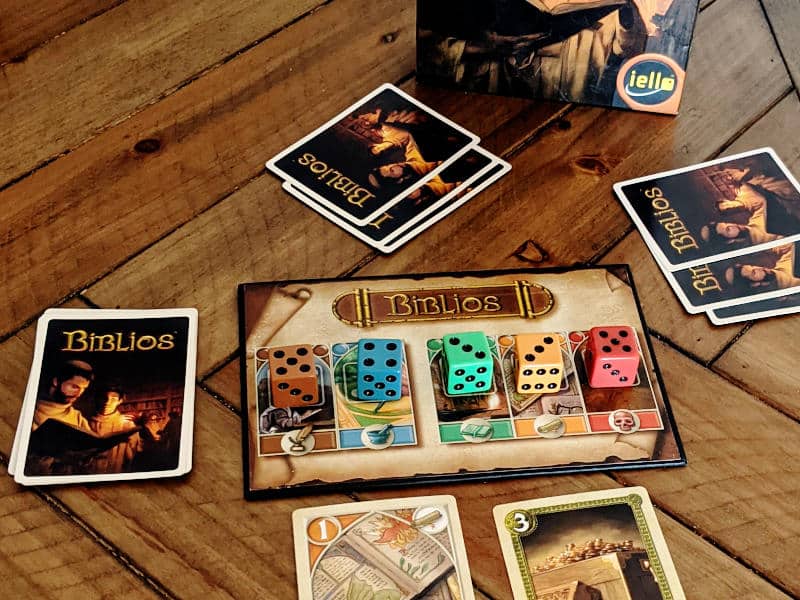 Sometimes, older games are the best, especially if they are really well designed and do one or two things exceptionally well. Biblios is such a game. It’s now over 14 years old, but it still stands proud among the large number of other modern card games. It cleverly distils a mix of hidden information, card drafting, push-your-luck and bidding into a game that becomes more and more interesting the more you play it. Luckily, it’s really easy to explain and plays fairly quickly, so it’s no problem playing it several times in one evening and watching how the meta of the game develops amongst your games group.

In the first phase, you take turns drawing a certain number of cards, depending on player count, keeping one of them in your hand, putting another face-down onto the bid pile, which comes into play in the second phase of the game and placing the rest face-up, so that the other players can take one each. You have to draw each card one by one and decide what to do with each card as you draw it. You can only ever keep one card and only ever place one card on the bid pile.

So the decision is tough. The first card you draw may seem pretty good, but if you decide to keep it in your hand, you will kick yourself if you draw a better card later. Sometimes you might want to defer your decision by putting the card on the bid pile and as long as you have enough money in the second phase of the game, the bidding phase, you will still be able to acquire the card.

However, you may also push it too far and end up having to take the last card you’re allowed to draw on your turn. You may be lucky or you may not. It’s the usual conundrum of push-your-luck games. Chances are, you will get it wrong eventually, but every time it’s your turn again and you have to make your decisions again, the tension and the excitement rise. You cross everything and hope for the best.

Of course, there is a lot of luck involved in this phase of the game, but because you decide what to do with each card, it does feel like you have at least some level of control over the luck. It is possible to be really unlucky, but that’s where the second phase comes in.

Let me elaborate this a bit further, because the main aim in Biblios is to collect cards of five different colours. Each colour is worth a certain amount of points at the end of the game, recorded by a dice of the same colour. If the values of your cards of a certain colour add up to the highest number compared to all the other players, you get the points that the relevant dice indicates.

The dice all start with the same value, but there are cards that allow you to manipulate them, increasing or decreasing their pip value by one. So if you think your hand is quite strong for certain colours, you will want to increase the dice values of those colours. Of course, other players will see what you’re doing and may do their best to lower the values of those dice or they may decide to try and get better cards of that colour, so they end up winning the points at the end.

All of that already happens in the first phase, but it continues in the second phase. That’s when you go through the bid pile and you start auctioning off the cards that were placed there during the first phase of the game. If a colour card or a dice manipulation card is up for auction, you spend money cards to bid on them – and that’s where I was going when I was talking about having no luck at all in the first phase.

If you end up only ever getting money cards in the first phase of Biblios, then in the second phase you’re in a very strong position to outbid everyone and get the cards you want from the bid pile. Of course, the bid pile is likely to contain less powerful cards, but at least in the second half of the game you have a better idea of what colours everyone is going for, so you can choose wisely and still win.

Once all the cards have been auctioned off, everyone reveals their hands and counts the values of their colour cards. The person with the highest value gets the points indicated on the relevant dice and then once that’s done, the player with the most points wins. It’s pretty simple really.

That alone already makes for a wonderfully exciting and fun game, but Biblios gets even better if you play it multiple times with the same group of people. Now, the meta of the game starts to develop. You may have realized that one player tends to go for money cards in the first phase, to give them a strong hand for the bidding phase. So you now do all you can to stop them from getting those money cards. You will also start to be able to read other people’s poker faces as they draw cards and put them either in the bid pile or keep them in their hands. You will know if they got a great card and you can potentially do something about that.

I certainly had a lot of fun playing Biblios with my games group multiple times and even though we played online, I started to see the sort of strategies they were going for and tried to formulate my counter-strategies. I know that I want to get myself a copy of this amazing card game, because I know my family would enjoy playing it. Sure, there is player interaction in the bidding phase, as players will try and artificially increase bids to make others pay over the odds for a good card – but of course, as the group plays the game more, they will get wise to that and will call their bluff.

So, if you want a great card game that plays quickly, is easy to learn and gives you enough to think about and allows a wonderful meta to develop, then Biblios is for you. It certainly is for me.