Finally, the baton of ringmaster has been passed to you. Your predecessor has been in the job for many decades, but now it’s your turn. You need to get the most out of the motley crew of performers and put together a show that will beat your rivals’. Yet, immediately it becomes clear that you need to bring in new talent to make your circus really stand out from the rest. It’s time for you to Scout by Kei Kajino (梶野 桂) from Oink Games. 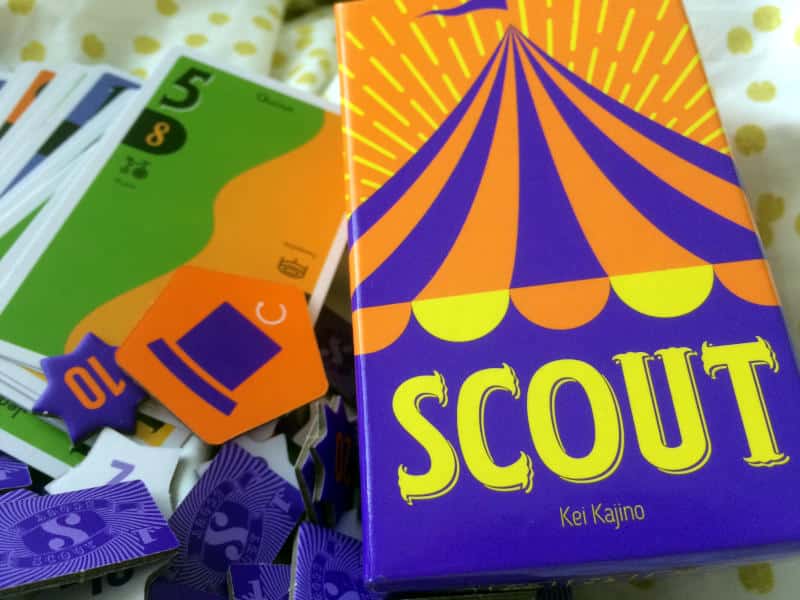 OK, forget the intro. The circus setting is all wonderful and whatnot, but it has very little to do with the actual gameplay. I know it sounds harsh, but it’s the truth and it is really no negative reflection on Scout. As always, Oink Games have come out top with a brilliant performance. The designer Kei Kajino didn’t clown around and created a rummy-style game with the perfect balance of simple rules and amazing depth of gameplay.

So there is a deck of cards numbered 1 to 10 (or maybe just up to 9, depending on player count). Every card has two different numbers on it – one in the top left corner and the other in the bottom right. Fan your hand of cards one way and you see one set of numbers. Rotate your hand 180 degrees, fan the cards again and you see the other numbers.

At the beginning of the game, you choose one orientation and after that, you have to keep your cards that way. You can’t turn the cards around, nor can you swap their places. Everything has to stay as it is and your task is to either play adjacent cards that form an ascending or descending sequence of numbers or where every number is the same. You can play anything from a single card to your whole hand.

The problem is that you have to play a better set of cards than what’s already been played before. So either a longer or higher sequence or more cards of the same or a higher number. There are also other options, but in principle that’s it.

When a player empties their hand or nobody can top a set, the round ends. Everyone tots up their points for that round. Play as many rounds as there are players and then the person with the most point at the end wins.

It sounds a bit weird when you listen to this explanation. You just have to play it to really experience it.

There are a few more rules in Scout. For example, if you can’t top the set that’s currently out, you can take a card from that set and add it to your hand. You can choose where you place the new card and in which orientation. That’s how you can slowly build up bigger and better sets. At the same time, the current set gets smaller, allowing the other players to beat it.

There will come a time in the game when you have to talk to the other players about how to work together to beat the current set. If you don’t do that, you are all likely to lose. After all, it is possible to get negative points in Scout. However, once you’ve been able to pick apart the current set, your alliance will be over and it’s everyone for themselves again.

The more you play the game, the better you will get at it. At first, you tend to think that playing bigger sets at the beginning is a good strategy. However, after a bit more experience you tend to find that starting with smaller sets is the better option. You want to slowly improve your hand and build up to the show-stopping performance near the end.

Keep a keen eye on the number of cards other players have. If you can play a set that has more cards in it than everyone around the table has in their hands, you’re highly likely to win and be the greatest showman that round. That’s not always easy, but something you do try to do.

Choosing the orientation of your starting hand can also be important. I strongly recommend you look at both options quite closely and carefully choose one that gives you more potential. It’s hard to say what a good hand is, but it’s not so much about already having a great set at the start. It’s more about having different options that allow you to adapt to what other players are doing.

Every round feels like you’ve been shot out of cannon – that’s how quickly it’s all over. Even with a larger player count, a whole game is over in less than 30 minutes. There is usually only so much to think about. Analysis paralysis is going to be very rare, but you do want to take a moment to weigh up your options.

We played four three-player games in less than two hours. Most of the time is spent thoroughly shuffling the cards, making sure their orientation is also randomly changed, and then deciding which orientation you want your hand to be at the beginning.

Choosing cards to play or deciding whether to take a card from the current set is pretty quick and even when you do take a minute or two to think, most of your turns will be done within a second or two.

As with all Oink games, Scout comes in a small box. It’s really quick to explain and learn, even faster to play and a huge amount of fun. The graphic design is also really good and the components are of great quality. The game will easily survive a lot of play and will still look good afterwards.

Despite my comment about the setting at the beginning of this review, the game does sort of tell a story. You all start out with one or two street performers and slowly grow your group of circus performers. By the end of the round, you will have built up to the grand finale and put on the show of your life.