I’ve been saying it for a while now: Wingspan by Elizabeth Hargrave and Stonemaier Games is an amazingly beautiful game. The great physical table presence created by the dice tower and eggs, the gorgeous illustrations on the player mats and cards, the sheer number of different birds on the cards, all with their latin name and a brief description of what they are, and the high quality of all the components and parts make it very special. The artists, Ana Maria Martinez Jaramillo, Natalia Rojas and Beth Sobel, have done an amazing job, and Stonemaier Games has ensured that the product meets, if not exceeds, everyone’s expectations. However, the beauty and quality are only one part of what makes this game so outstanding. For me, it is the gameplay that lifts Wingspan to the next level. 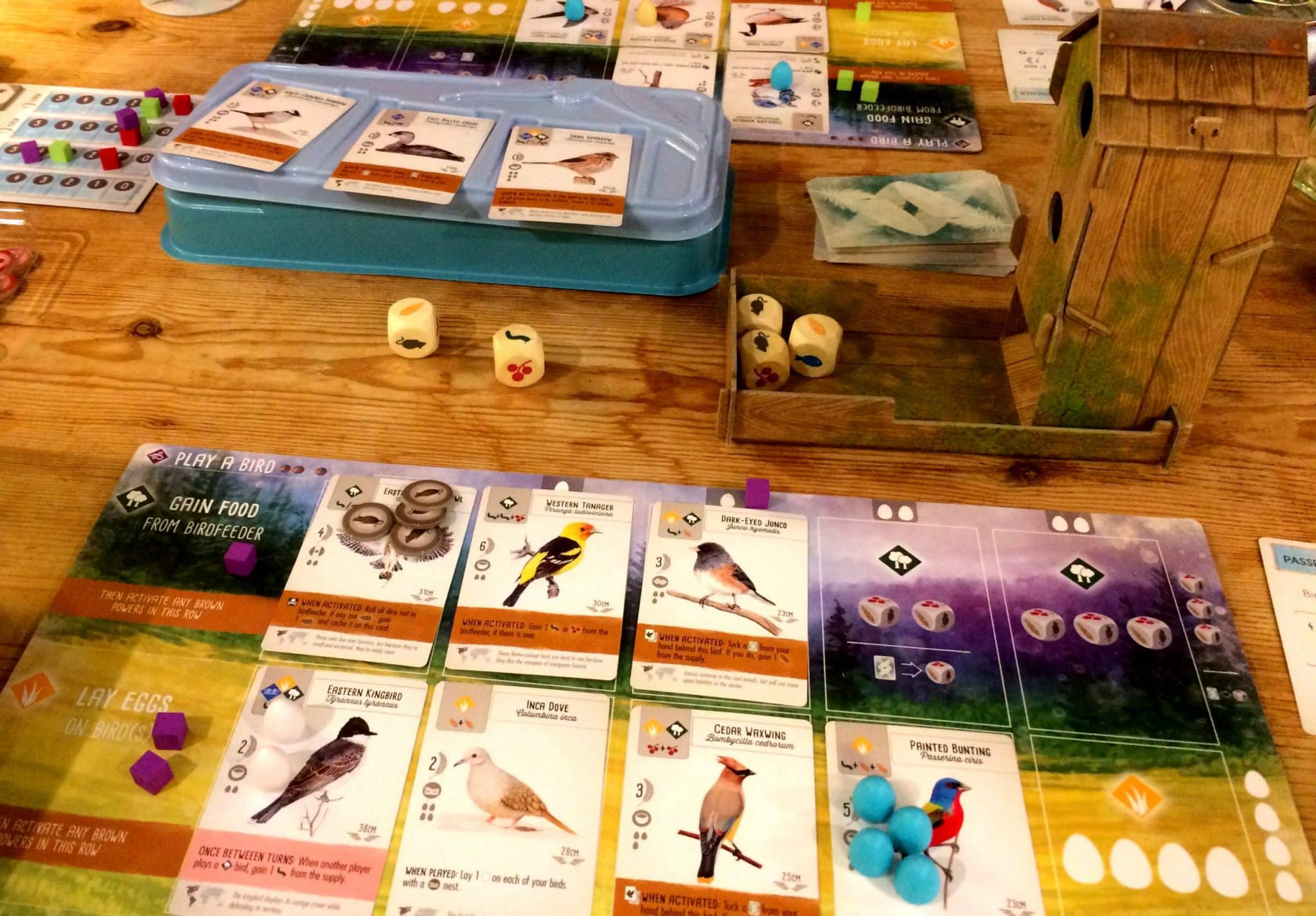 As soon as you start to play you get a sense of the trials and tribulations the birds in your wildlife reserve face. At the beginning of the game the bird feeder is full to bursting, but soon gets depleted as everyone takes their turn until eventually it fills up again. It beautifully mimics the change of seasons and the ebb and flow of available food in nature. As supplies dwindle the general bird population becomes weaker and an easier target for birds of prey, who can finally get what they need to survive. Some of your birds of prey have large hunting grounds and will sometimes dip into the card deck for potential targets.

There also never seem to be enough eggs in your habitat to support a healthy population. As soon as a few eggs are laid they are needed for the next generation of birds, which of course require more food, depleting the bird feeder even more quickly. As your nature reserve thrives, it attracts more birds who hope to nest there themselves. However, the limited supply of food means that you have to decide which birds you entice into your sanctuary and which ones you turn away. Luckily, some of the rejected birds are able to join flocks of birds already established in your beautiful reserve, so it’s not all bad.

So there is a lot going on in Wingspan, but the game doesn’t feel complex. In the first round there are only so many decisions you can make. Chances are you will need food to play your birds, so you have to gather food, and not long after you will need eggs as well, meaning you will have to lay eggs. The game really eases you in slowly, guiding you in your decision making at the beginning. Less experienced players will find it easy to learn and play, as they are introduced to resource management, action selection and hand management mechanisms.

Yet, as the rounds go on, the complexity increases. The number of options increases and you have to start planning further ahead. Making your food gathering action more powerful by playing more woodland birds is important, but so is increasing your egg production with grassland birds. However, you also need to be able to draw bird cards to spend your food and eggs on, so wetland birds become a goal in your gameplay.

For more advanced players the focus will quickly be on which birds are played in what order. Playing one bird could give you extra eggs with their when played ability, which you can use to play the next bird, which gives you the food you need to play the third bird – and so on. You really have to plan ahead carefully to get the biggest benefit from every action you take, and it is this that will attract people who like heavier games.

Yet, it is virtually impossible to keep an eye on everything you need to do. On top of your resources and birds, there are end of round goals and end game bonus objectives. I don’t think there are many people who will be able to handle all at once, so you will have to ignore some things and put your focus on others. If you don’t, you will probably make costly mistakes. That means players who make decisions more intuitively, without thinking many steps ahead, have an equal chance of winning the game as players used to heavy games.

There is a good amount of chance in Wingspan: the food available in the bird feeder is decided by dice rolling, what birds are available is based on a shuffled deck of cards, and which end of round and end of game bonuses are out is also random. It makes thematic sense, because even if you do everything you can to keep your birds happy, a sudden and unexpected cold snap in spring can make food inaccessible and reduce the chances of birds being able to support a large brood later in the year. It is this chance that further levels the playing field, and allowing players with any kind of game experience enjoy Wingspan together.

Of course, the quality of the components and the illustrations are absolutely outstanding, and that really rounds it all off. A game that is all about appreciating birds in nature has to be visually appealing I think. If the cards were showing only generic images and the components were only simple wooden cubes, then the game wouldn’t work quite so well. However, in Wingspan the gameplay, illustrations and components work perfectly together to make an amazing game.

It is our new favourite game and we’ve played it many times, constantly discovering new birds and adapting to new conditions created by the natural randomness of the dice, cards and bonuses. It is a pleasure to pick eggs of the colour you imagine the birds lay and place them on top the cards. It is satisfying to look at the illustrations of the birds and learn a little about each one. The game is such a joy to play, and if you ever get a chance to play Wingspan, then give it a go. Whatever type of player you are, I am confident you will enjoy it.