Through five millennia you guide your civilization from the discovery of fire through vastly different eras to its ultimate end. You discover and develop different technologies, flex your military muscle, explore new lands and execute unexpected and sometimes devastating science experiments as your people advance from generation to generation. In Tapestry by Stonemaier Games, you write an alternative history that has echoes of mankind’s but turns out completely different, but hopefully for the better. 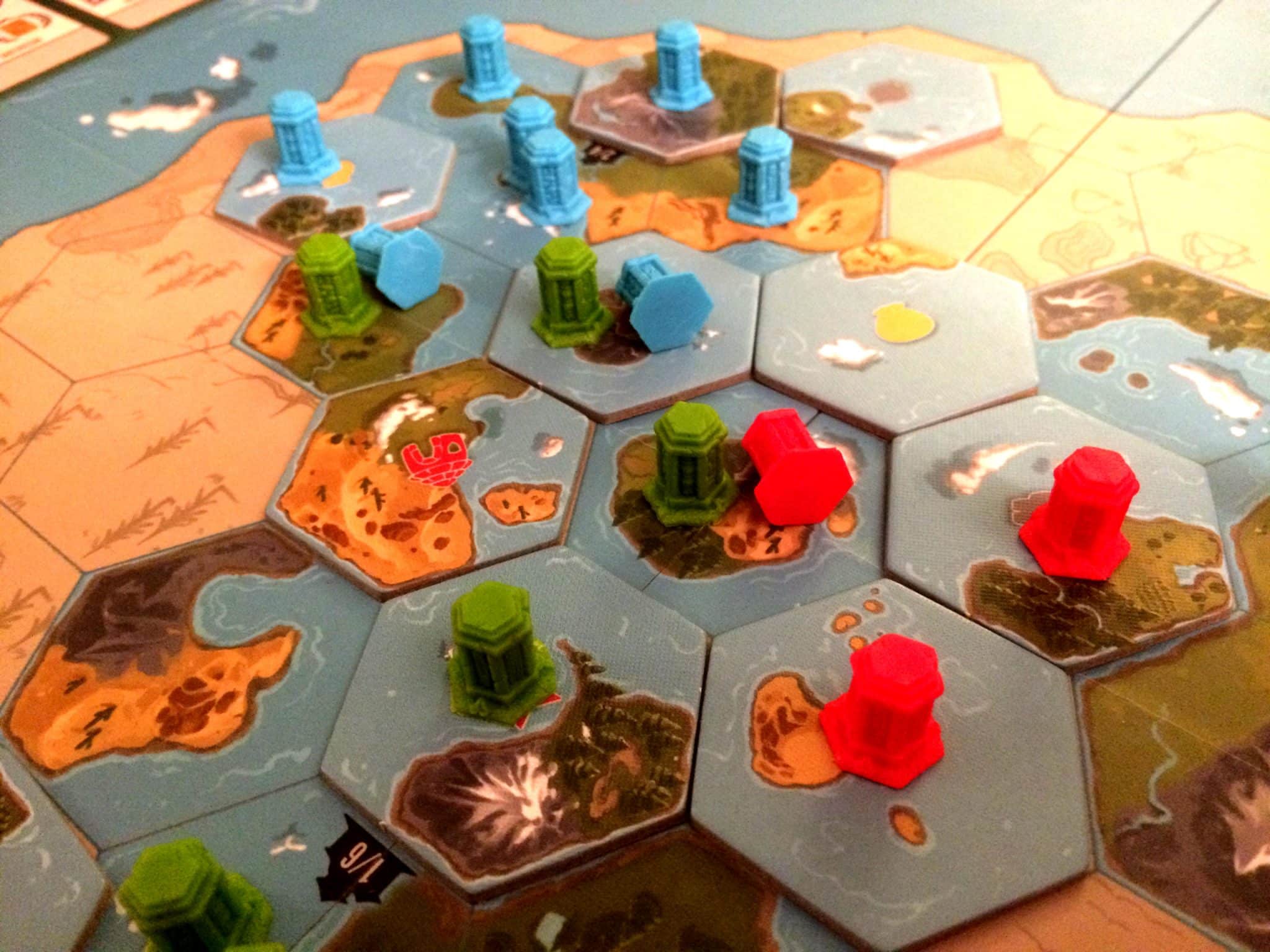 So here is a game that basically gives you one simple choice: move up one space on one of the four advancement tracks and take the relevant actions. You keep doing this until you run out of resources, at which point you will take an income turn instead. So technically you have only five options on your turn, four of which are basically the same: you can advance on one of the four tracks or take income.

The whole game is definitely trying to be very simple to learn and play. The rulebook consists of four, be it large, pages with lots of illustrations to break up the text. It’s very easy to absorb. The game board and player mats use mostly symbols, making the game very visual and almost language-independent. The cards are very colourful and beautifully illustrated and contain very little or no text, again relying on symbols where possible.

In the way that you learn how to play it, Tapestry reminds me of Wingspan. In both games, the choices are relatively easy to start with, and as play progresses, some actions become only possible if you have certain resources, which in turn means you are forced to take certain actions to get those resources. Both games really guide you through gameplay one turn at a time. Also, the way that your actions get more powerful as you move up the advancement tracks in Tapestry is similar to how the actions get more powerful in Wingspan as you play birds.

There are also echoes of other Stonemaier games. For example, some civilizations in Tapestry have the ability to uncover bonuses, which is very reminiscent of upgrading actions in Scythe. So you will feel quite at home with Tapestry if you know other games from the publisher.

However, there are plenty of differences of course. One thing that I really liked is that players keep taking turns in clockwise order, but everyone can decide when they move into the next era, which is sort of like starting a new round, but only for themselves. It’s not the first game that does this of course, but I hadn’t come across it so far in the games I have played. This way of moving through the game means that some players can be nearing the end of the game, while others are only halfway through their civilization.

That’s really interesting, until the end of the game where it can lead to players sitting around waiting for other players to finish another dozen turns before the game is actually over. People can get bored and turn to their smartphones. Yet, I found for our games group that we remained interested and invested in the game and continue to try and influence the outcome with our usual banter. So even though it can feel like extra pressure for the last player to finish their game, it also offers the opportunity for more social interaction.

Now let me talk some more about Tapestry appearing to be very simple. That’s not quite true of course. There is a lot of complexity in the game, which comes from how advancing on a track triggers different and progressively more powerful actions. You really have to formulate a strategy near the beginning of the game, if you want to play effectively. The complexity is further increased by the different tapestry and technology cards you gain and activate during your turn, and the ability to expand and conquer areas on the map. Finally, the specific ability of your civilization will also force you to find a suitable strategy that matches with everything else that is going on.

Yet, Tapestry isn’t just about strategy. From time to time, you will have to respond to other players’ actions. Even though it is unlikely that you have to change your strategy completely during a game, it does happen and you certainly have to adjust your tactics as other players expand on the map or advance on a track that is critical to you. However, in my games so far I never felt that you have no way of coming back if you’ve dropped far behind, even when other players have done a lot to ruin your plans. There always seems to be a new way of getting points and catching up. So despite there being some level of player interaction, it never seems to be devastating.

In fact, I have wondered whether it really matters if you play well or not, as long as you don’t give up completely. As an example, in our last four-player game someone was over a hundred points behind two other players, yet they were able to not only catch up, but actually win the game at the end. They were the last to advance into the fifth era, so took several turns back to back, suddenly and unexpectedly gaining huge amounts of points. They themselves hadn’t expected to do so well, and the three of us who had already finished our eras were starting to get bored by them taking repeated turns, when we suddenly saw how they were racking up dozens of points in short succession – and boredom quickly turned into awe.

I can’t really say if this was a fluke, because Tapestry is the sort of game that you do need to play a lot before you can get even a small glimpse of how it works. It’s very similar to Scythe in that respect for me. Factions in Scythe that seem overpowered when you play your first few games, later turn out to be actually much less powerful and other factions rise to the top.

In Tapestry, I don’t think it is so much a matter of understanding the civilizations better by playing them more, but generally exploring the game as a whole, as an interplay between civilizations, advancement tracks, tapestry cards, technology cards and expand and conquering the map.

So even if it turns out that the game has overpowered civilizations, or if certain combos of technology and tapestry cards and civilizations are a guaranteed win, the journey of discovering these unbalances is going to be enjoyable. There is so much happening in the game that makes playing it a joy.

Yet, there are things that did really annoy me. First of all, a short rulebook is usually a good thing, but it’s not in this case. I felt that it still wasn’t clear how to play the game after reading it. You just had to start playing the game and randomly take actions and see what happened. That in itself isn’t necessarily a bad thing, as I do like the idea of learning a game by playing it, but I felt frustrated by not getting a rough idea of what I should be aiming for. There was no rough guide as to what benefits the different advancement tracks could give to help me formulate a rough strategy – and as I said, you do feel like you need a strategy from the start.

It was also very confusing how the tapestry cards worked. Not only did we not understand how you could play your first tapestry card, when you didn’t start with any, we also thought you covered up the Maker of Fire slot to indicate that you completed your first era. As we started going through the game, we did quickly realize that you get a tapestry card in your income phase and can get more during gameplay, but it wasn’t until the end of the game that we worked out that we went wrong covering up the pre-printed Maker of Fire era.

There are also a number of unclear situations that arise during gameplay. For example, gaining a landmark happens irrespective of how you reached that relevant slot on an advancement track, even though some card text seemed to indicate that you wouldn’t get any benefits or bonuses when advancing in a certain way. The rules do explain this, but it seems to me to be in the wrong place. There are also some tapestry cards which needed further clarification, which was a bit frustrating.

The next annoyance came from the 4+ side of the map. We feel it’s too big for four players, and probably five as well. It feels too hard to actually reach another player to have a chance of toppling one of their outpost tokens. It would take two players, who are next to each other on the map, to directly head for each other to see some proper conquer actions. So we have decided to try the 1-3 player side of the map the next time we play with four players.

However, the biggest frustration for me came from the landmarks themselves. They don’t properly fit in the spaces that they are supposed to cover, especially the bigger and L-shaped buildings. In our first game, we tried to squeeze them into a smaller area and even in subsequent games, we had to continually refer back to the board that shows the landmarks’ shapes to remind ourselves what squares they should cover up in our capital cities. The shapes are very important if you plan on covering up certain spaces, especially because you often have to plan quite a few turns ahead and leave specific gaps for the landmarks to fit, only to find out their shape is different to how you thought it should be.

One other big thing, which didn’t actually bother me at all, is that it’s called a civilization game, when I would say it really isn’t one. Yes, you have a civilization that you play and you expand and conquer on a map, but that’s really only secondary to the game. Tapestry is certainly more of a storytelling game than a civilization game, but it actually is neither. It’s a wonderful engine-building game in my view – and that’s absolutely fine and ticks all the boxes for me.

So, even though the list of negatives seems long, and I still find many of them annoying and frustrating, I love Tapestry. I appreciate it’s a lot of money to pay for a game, so you may decide to invest it in a different one, but having paid it, I now can’t wait to play Tapestry a lot more. The game asks for your full attention to the detriment of other games. It’s a bit self-obsessed in that sense. However, it takes me back to how I felt about Scythe. I had a love-hate relationship with it. I hated when I lost and couldn’t figure out why, but couldn’t wait to play it again and try a different approach.

Tapestry is a little bit different, in that it suits my playstyle a lot more and feels a lot more natural in its flow and how it guides you from turn to turn. Yet, just like Scythe, I can’t wait to play Tapestry again and see what other civilizations, tapestry and technology cards I can discover and what other strategies I can try. So even if this novel turns out to have no meaningful message, it certainly has a plot full of twists and turns and surprises.