Your tribe is sitting around the fire – a new invention that will prove to be the spark of great things to come, things that nobody can yet predict or even dream of. It feels like you have been here before though. The scene seems very familiar. The faces may be different and so is the location, but the warmth of the flames and the crackling of the embers trigger memories in you – memories of a bright future, memories of generations to come, of a civilization rising out of the plains and large structures reaching into the sky. Yet, something is different this time. It seems as if your tribe of Traders has an extra coin and an extra food in this more balanced version of Tapestry by Stonemaier Games. 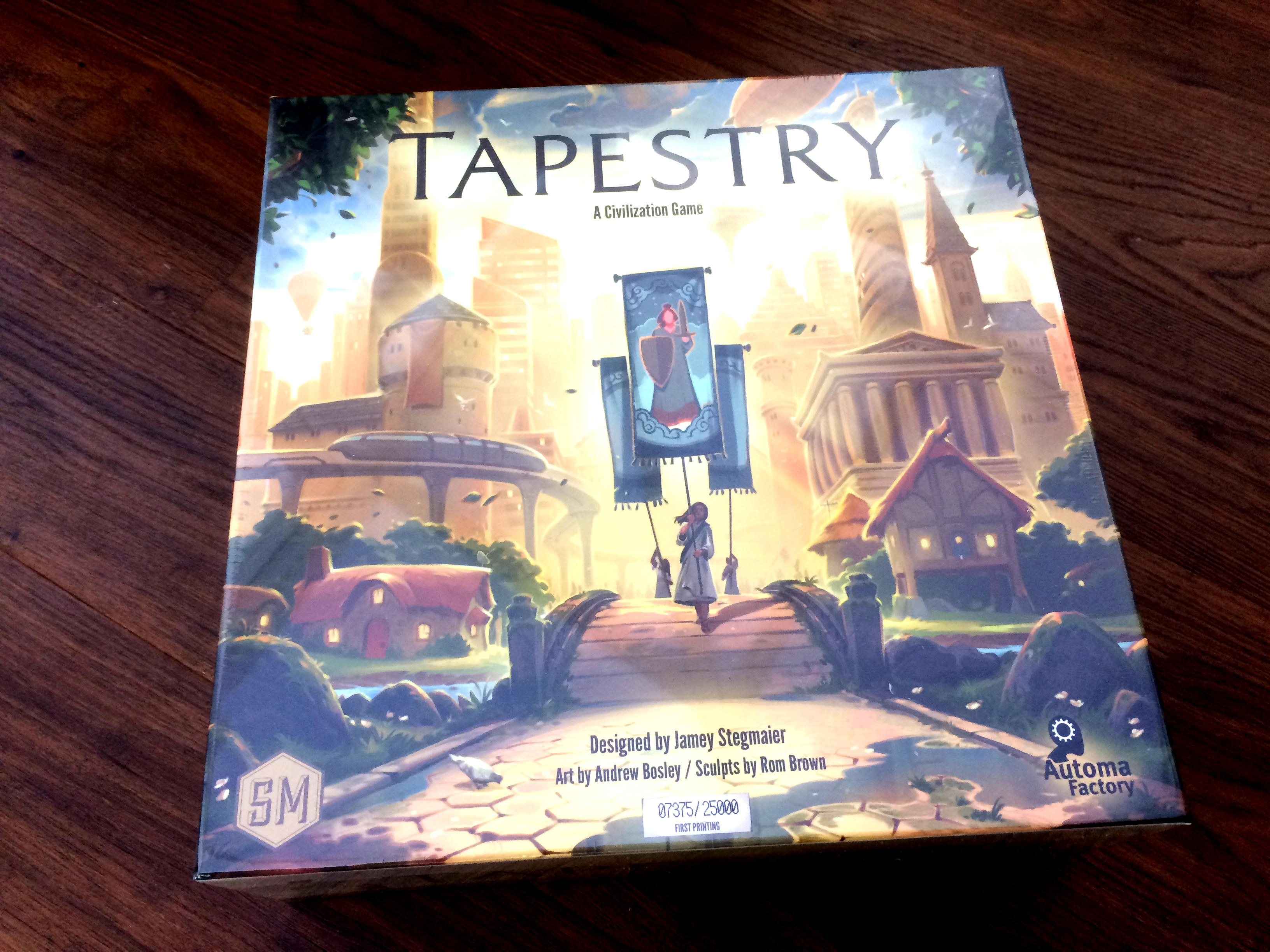 Yes, there is now a PDF of amendments to the starting setup of Tapestry that you can download from the Stonemaier Games website. The PDF explains which civilizations are affected and which ones are not. It also includes some adjustments to some civilizations if you gain them during the game. Everything else in Tapestry remains unchanged however. It is a single page that can be printed out really easily and which makes it very easy to find the civilization you’re playing and adjust your starting setup accordingly. However, do check the PDF from time to time, as Stonemaier Games may make further changes as more information about actual gameplays is fed back to them.

As you will have seen in my Saturday Review of Tapestry, I really like the game. I have played it many times more since then, including with the adjusted civilizations introduced by the PDF, and even though the things that I found annoying about Tapestry at the time are still valid, I still love the game as much, if not a bit more.

I have now played most of the civilizations that come in the game, and across my games group I have seen all civilizations and how they play. Like in any asymmetric game, there are some civilizations that suit my playing style better than others, and some feel easier to play than others, but all of them try to guide you in your choices, at least to some degree. The Nomads for example really want you to explore and conquer the map, the Craftsmen want to build a lot of income buildings to gain benefits, while the Inventors clearly want everyone to invest in technology cards.

Yet, there are also many civilizations that are a lot more flexible and force you to work out a suitable strategy for them. The Futurists for example start ahead of everyone else on all four advancement tracks – but after that it’s really up to you to decide how to develop that into a decisive advantage. The Leaders on the other hand can advance on each track once over the duration of the game, but in which order you take advantage of this free step is up to you. It’s these civilizations that make you want to explore the game more and play it multiple times to see what you can do differently this time.

Similarly, it feels like the technology advancement track is the one to go for, as it seems to offer the biggest potential points and overall benefits. That makes sense, because you do want to develop your civilization and technology has played a huge role in mankind’s progress. However, it can also feel like it’s the only way to win the game, and makes you want to almost completely neglect the other tracks. Yet, I do feel like this is just an impression you get until you’ve played Tapestry many more times and tried out different combinations, in particular as some civilizations do benefit more from the other tracks.

So even after many plays, there is still a lot to explore and try. I certainly want to see how the exploration and military tracks could work together to control the central map and win the game that way. However, it will depend on what civilization I get dealt in the game, as it won’t work so well all the time.

The reason for this article was to talk about the amended civilizations, so let me talk about that. I must say, I didn’t feel that the adjustments helped us. I reckon you have to have played Tapestry many, many more times, before certain civilizations will need the boost or need to be held in check. In fact, at the moment it feels that the adjustments give certain civilizations an unfair advantage. For example, someone played the Architects in our four-player game and therefore gained an extra 30 VP at the start, yet they won by more than 40 points, which would have been a lot tighter without the boost.

So even though we will continue to play the game with the recommended adjustments, I really don’t think they are needed, unless you are a veteran of Tapestry – and as my love for the game continues, hopefully I will become such a veteran myself very soon.