I know, Scythe by Stonemaier Games has been out since 2016 and has had a couple of expansions released as well, including promo packs with additional encounter cards. So chances are you have already heard plenty of reviews about this game and maybe own  it yourself, but I still felt it’s worth reviewing, because I am sometimes surprised by how many people still don’t know Scythe. 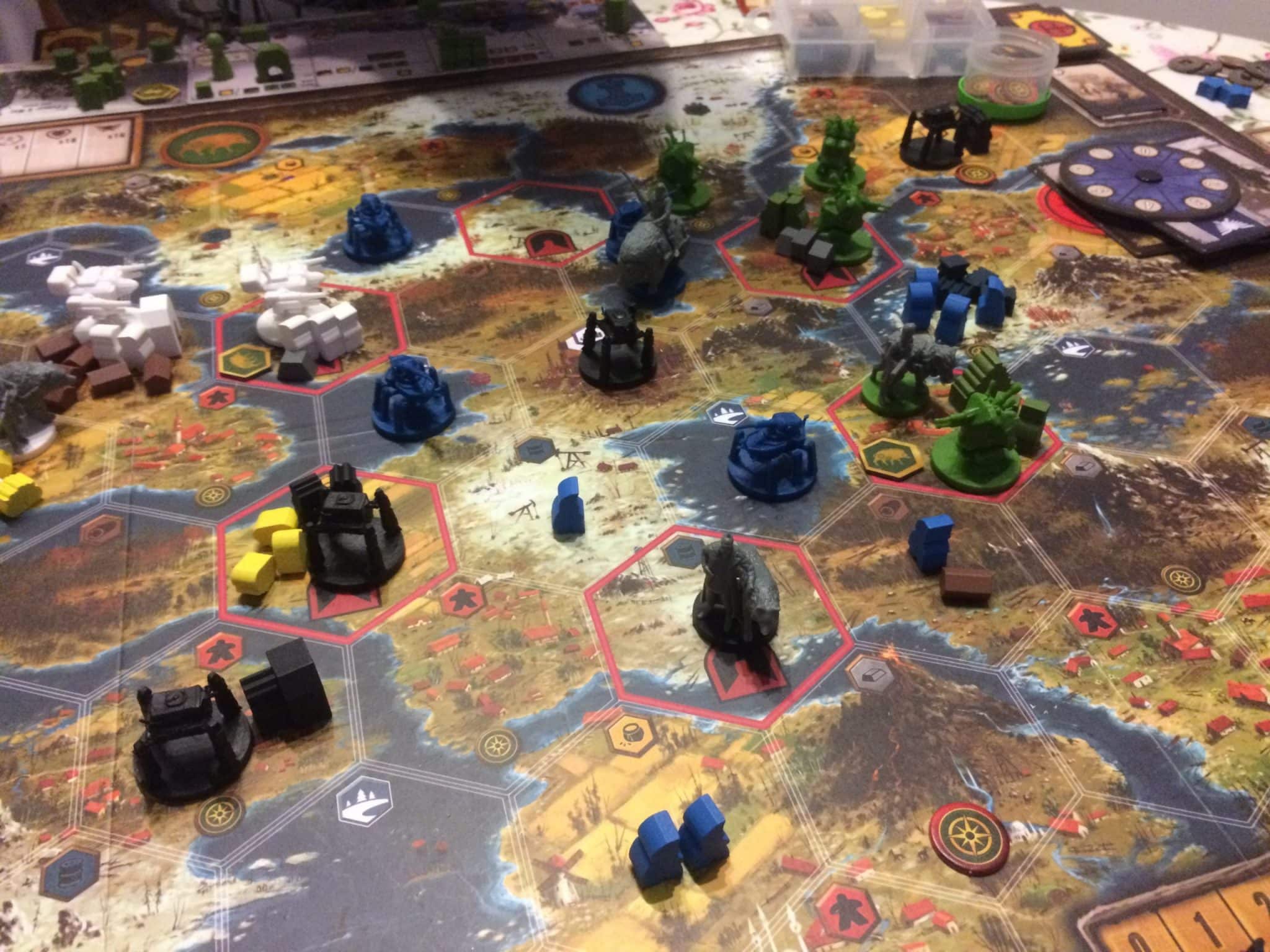 The game is set in an alternate world of 1920s Europe, or Europa as it’s called in the game, which was created by Jakub Różalski who illustrated the whole game. The art is absolutely stunning and really draws you into a world of diesel mechs, cavalry on horseback, people working their land and countries which are starting to recover from a great war.
On the face of it, Scythe is a war game, but in reality it’s a mix of area control, resource management and action selection. Fighting plays a very small role and your strategy will be much more about threatening battle, but not actually wanting to fight. There is constant tension and you are always trying to make yourself look strong to keep your opponents at bay. Every battle will leave you much more vulnerable, whether you win it or not, because the rewards are often too few.

Each player controls a faction, all of which have slightly different abilities, represented by four mechs. As you deploy each mech, all your main pieces gain a new ability. So over time your forces become more and more versatile and able to move around the board more efficiently. That in itself is a neat mechanism, because you always have to decide what mech to deploy when, depending on game state and how far other players have come. You really have to weigh up the pros and cons of one mech’s abilities over another, because it’s relatively expensive to build mechs.

Every player also has a different action selection board, which may match your faction abilities well, or maybe not so much. It is up to you to use the actions effectively to win. The interesting mechanism here is that each action slot has two parts to it – a top action, and a bottom action. If you can pay the cost, you can carry out the top action, followed by the bottom action, in the same turn – but chances are you will only carry out the top action and only have enough resources for the bottom action later in the game, and even then not usually on every turn. Again you have to decide whether a top or bottom action is more important, because you may really want to take a top action that allows you to produce more resources, but deploying a mech might be even better, except that it is the bottom half of a different action slot. The choices are usually hard, so when you do suddenly have a great synergy between top and bottom actions, it feels really satisfying.

The area control element in this game has more to do with leaving your main character, mechs, workers or buildings on as many hexes of the board as possible. However, you don’t want to have spread out too thinly throughout the game, because it makes you easy prey. For the most part you will have several of your pieces on only a handful of spaces to make the best use of them, and you have to decide when the game nears the end and then start spreading out thinly to control lots of territory. Again, trying to gauge how close the game is to finishing is hard and creates additional tension, which in turn can create an amazing feeling when you get the timing right.

The end of the game is decided by who places their last star, which happens when you achieve certain tasks – and the game does end immediately. Other players don’t get another turn, which many people have criticised, but which I think is a really interesting and new mechanism. You often feel like you needed just one more turn to finish what you were planning to do, which of course is frustrating, and which is why I have a love-hate relationship with the game. When I lose, I feel frustrated for a day or two and then can’t wait to play it again – and again – and again.

The game components are very high quality. There are very detailed minis, which many people have painted. So if you like that, it’s worth taking a closer look at Scythe. The base game comes with 25 minis, and the Invaders from Afar expansion has another 10 minis. There are also 4 times 5 wooden buildings, and every faction has its unique set of wooden woker piece, plus there are stars, wooden cubes and a peg action selection marker. The base game comes with cardboard coins, which I think are worth upgrading to metal coins. There are also lots of cards that represent objectives, battle cards and more. So you do get a lot for your money.

So Scythe is a very heavy strategy game in my view, which is great fun at three to four players, while five players can be a bit too much. You can also play two player of course, and the game comes with the Automa cards, which are an AI opponent, so that you can play solo. However, we used the Automa in three player games before to make it more interesting and avoid two players ganging up on the third, and it would also work well for two player games, where the map can seem quite empty.

I really love to hate this game and can’t wait to play it again – it has been too long.