I’m sure, many of you are tired of hearing all about Essen Spiel 2019. Everyone who went is talking about all the games they saw, played and bought, and anyone who didn’t go is reading about all the games everyone saw, played and bought. So I want to talk about the people side of the exhibition and share my experiences of attending this major event for the first time. 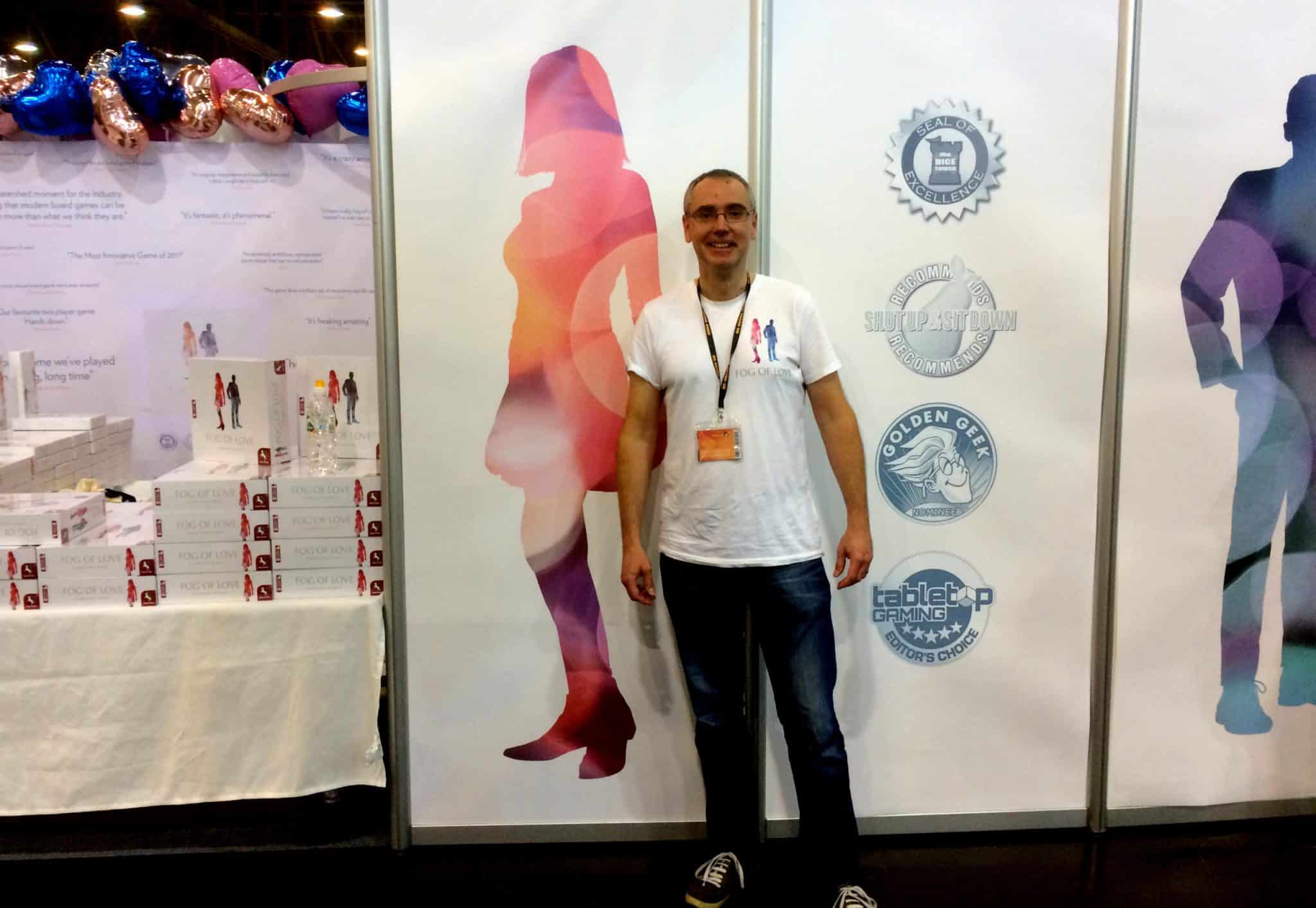 Let me start at the very beginning and let me thank Mark Cooke of Hush Hush Projects for giving me the opportunity to attend Essen Spiel 2019. He heard me talk on the We’re Not Wizards podcast about not being able to make it this year, but planning on going next year. So he approached me and invited me to demo the new German version of Fog of Love at the event, which I gladly did.

I arrived on the Wednesday before the show, helping with the setup of the stand. Already there was a sense of teamwork with everyone helping to get everything set up. We talked about how to demo the game and even though I had never demoed before, I felt relatively confident that it would be fine given that I had explained games to my games group before. We also discussed what exhibitors everyone wanted to see and what games we wanted to buy.

The next amazing moment was when Tom Heath from Slickerdrips walked by and stopped for a little chat. If you’ve ever seen any of his videos, you know what a lovely guy he is – and he is even more lovely in person, if you can believe it. He was waiting for his hotel room to become available and had decided to walk around the halls to get his bearings and see where everyone was. Unfortunately, I couldn’t talk too long as I had to continue with the setup of the stand, but it was amazing that an internet celebrity like Tom had time to speak to someone so new to the hobby like myself. It shows how wonderful the tabletop games community can be.

After setup was done, I headed to the hotel, but had to wait for the person I was sharing with to arrive and check me in. So I sat in the hotel lounge to charge my phone and catch up on social media, when a group of three Germans asked if they could sit next to me, which was fine of course. They then proceeded to take out Skull King by Schmidt Spiele, so I asked them what the game was and they offered me to join them, which I did. It was lovely to while away the time with this very interesting trick-taking game and make new friends.

Eventually, it was time for me to check in. Jacob Jaskov, the designer of Fog of Love, was my roommate, so as we went up to the room to get settled in, we had a lovely chat about how he designed the game and the plans for a new version of the game, that you can play with four, five or six players, as well as the original two. A prototype of this game was available to try at the booth, so it was exciting to find out more about the person behind the game and the plans for the future.

The next day was the opening of the show, and first of all one of my booth colleagues and I went through a rough demo runthrough, so we could refresh ourselves about the rules and decide how best to approach teaching the game to everyone. As we talked, I heard someone say hello and introduce herself as Emma. She had to repeat her name before I realized that it was, of course, Emma from Twitter. She proceeded to give me a hug and say hello, which was wonderful. Emma makes wonderfully funny videos and edits photos to make everyone smile. I recommend you follow her on Twitter now.

As we were chatting, Rachel and Heinze of Semi Co-op also came by and said a quick hello. Unfortunately, by then the exhibition had opened to the public, so I could talk no further and had to get demoing.

I then spent the morning and early afternoon showing Fog of Love to a lot of German-speaking people, all of whom had a wonderful time learning and playing the game. I don’t know how many times I did the same introduction to the game and said the same things, but it was a real pleasure teaching the game to everyone and seeing so many smiling faces and people getting into character as they started to play.

After my shift was done, I made my first trip around the halls, some of which were absolutely packed, making it very hard to make any progress. It was rather overwhelming, but to my surprise and by pure chance I spotted Antoinette of Board Game Inquisition, who had come over all the way from Ireland and who I run the Tabletop Inquisition podcast with. As soon as she saw me, Antoinette came over and gave me a huge hug – and I, in turn, gave Brian, her husband, a hug too. Neither of us had much time to catch up, but we knew we’d meet that evening – but more about that later.

I continued my walk around the halls but quickly abandoned trying to say hello to anyone or getting any demos in. I decided that I would just head back to the hotel, have a quick rest, then get ready for the Gaming Rules meetup that evening, which I did.

Antoinette and Brian were already there and had had some food, so I joined them and got myself some food and drinks too. It is amazing how thirsty you get during the exhibition, especially when you talk a lot, so despite having sipped water all day, I still managed to drink a large cola. It was nice catching up with my Irish friends and discuss our experiences of the event so far, as well as our plans for the next few days. I was only there for one more day, but felt it was just the right amount of time for a first visit.

After a while, Antoinette and Brian decided to head back to the hotel and I went inside to join the Gaming Rules meetup. I found a spare table, as I didn’t know anyone there, and by the time I had ordered another drink, two of my booth colleagues joined me, shortly followed by another fellow gamer. It didn’t take us long to get a game out and play. We were then joined by a friend of one of my booth colleagues, and decided to move to a different, larger table, where we continued to play games. It was so much fun playing games, talking games and making new friends.

Yet, I was starting to get tired and decided to leave. So I said my good-byes to Paul Grogan, who had organized the event, and thanked him for putting together a social evening for his Patreon supporters. There isn’t really any casual gaming happening at the exhibition itself, so it’s very important that we have an opportunity, such as the Gaming Rules meetup, to meet people and play games. Paul and I arranged to meet up the next day after my demo shift was over as he didn’t get a chance to say hello to me that night.

I also saw Tom Heath again on the way out, and he decided to go back to the hotel with me. Along the way, we chatted a lot more about his plans with the YouTube channel and some of my plans with the work I do. It was so wonderful to hear how others face the same sort of challenges making content.

While we were waiting for our tube train, Tom spotted Tony Boydell, who came over and joined us on the way back. He talked a lot about game design and the challenges he faces when trying to get his games published by larger companies. It was another, very interesting person to listen to.

The next day was my last day at Essen Spiel 2019, and before the halls opened, I went over to the Steeped Games booth to say hello to Dan and Connie. I had the pleasure of playtesting Chai with my wife and daughter, and we can’t wait to get our copy of this game to play. As you can imagine, Dan and Connie are lovely people and we talked about their next game, which is still at the prototype stage, and Dan showed me the box lid for Chai, so that I could find our names among the longs list of playtesters.

After my demo shift was over, I met up with Paul Grogan and joined a group of his friends for a short while to talk about board games, the exhibition and everything else. Yet, I couldn’t stay too long, as I wanted to catch up with a few more people, if possible. So I wandered over to see if I could say hello to Edward Uhler of Heavy Cardboard, as well as Jess of course.

Unsurprisingly, it was busy, but Edward saw me and a couple of other people waiting and called us over. He made everyone immediately feel welcome and at ease, how only he can. Yet, to top it all off, Jess spotted me and when she did, said that she had to give me a hug, which came as a huge and pleasant surprise. It’s probably the warmest welcome I have ever received. Here is this famous game reviewer and developer all the way over from the United States, and here is little old blogger me with a handful of followers, and yet Jess wanted to give me a hug. That was so wonderful of her.

She also proceeded to chat to me about how many games they had got and how they planned to get them shipped back home. It was really lovely speaking with her and it felt like we’d known each other forever. In fact, it is this encounter with Jess that, for me, sums up my experience of Essen Spiel 2019 and of our community as a whole. The great majority of tabletop gamers are welcoming, friendly and open to making new friends. We treat each other with respect and are genuinely interested in what everyone has to say and how they feel.

Before calling it a day, I wanted to catch up with some of my fellow German bloggers and podcasters, so I went to the Meet and Play session in room Europa and found Dirk of Der Ablagestapel and we had a quick chat. It was so nice to see him again, after we first met at UK Games Expo this year.

I am so happy that I work in this amazing industry and even though I am tired and the whole exhibition was exhausting and hard work, it also was so much fun and such a great pleasure to be part of. I hope I see all of you again next year, or hopefully at other events and meetups. You guys rock!