You sit quietly in your hide, binoculars in hand, peering out over the lake, with the grassland on the other side and the woodlands in the background. You have already spotted a fair number of birds that frequent this nature reserve regularly, but suddenly you spot something new. You think you glimpsed a read head and black and white back. Slowly scanning the woodlands, you see it again, hanging onto the trunk of a dead tree. It’s a white-backed woodpecker, which is a new visitor and comes with 80 other birds in Wingspan: European Expansion by Stonemaier Games. 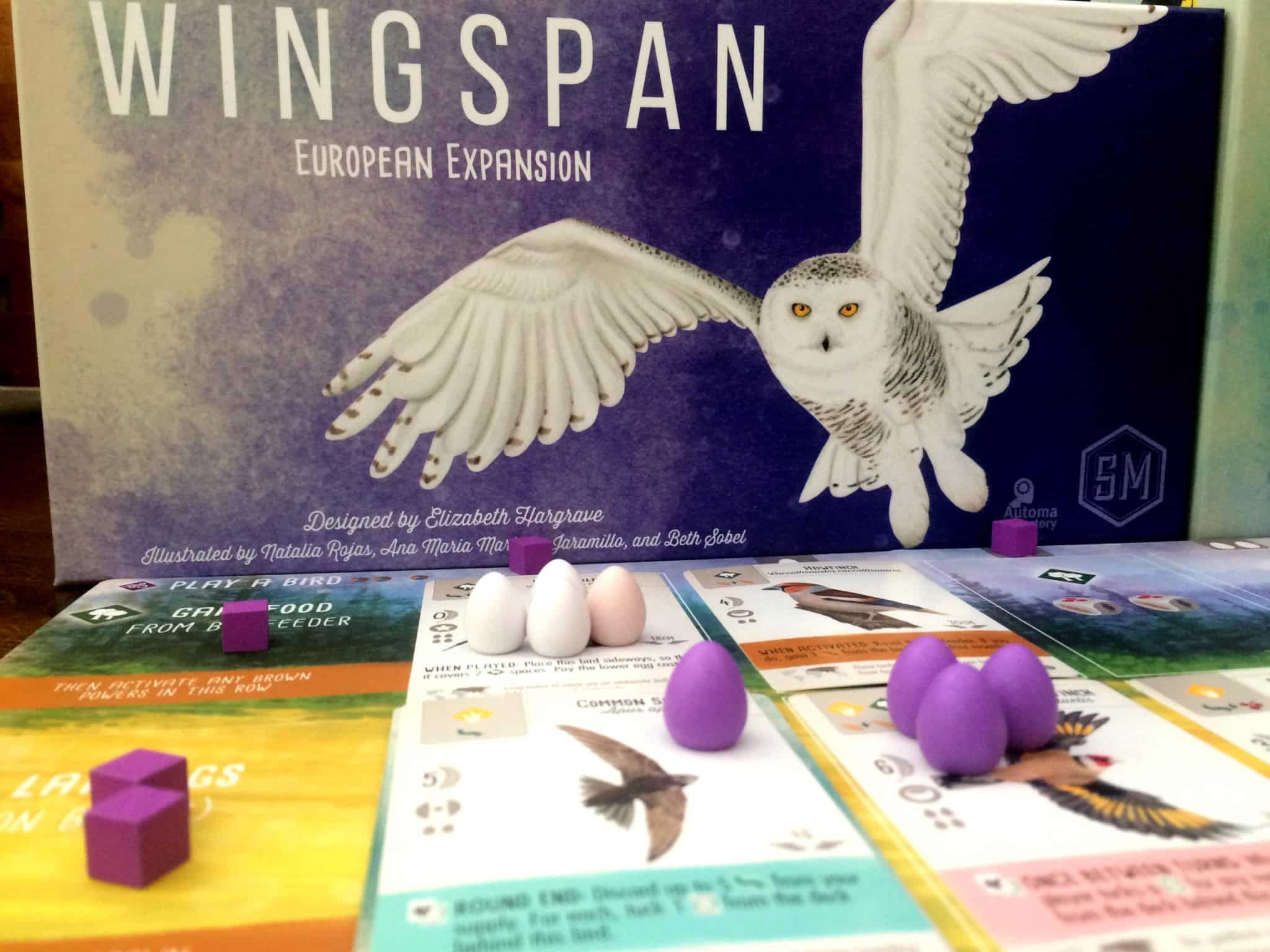 As many of you will know, Wingspan was my wife’s and my favourite game of 2019. Just read my review of the game and check out my top 5 games list for last year and you’ll see why it rates so highly for me. So it’s no surprise that the European expansion of Wingspan found its way into our home.
Living in the UK, it was always the European birds we were looking forward to the most. We had hoped that the first expansion for Wingspan would cover Europe, but Jamey Stegmaier didn’t reveal which continent had been chosen for the expansion until the very last moment – and as soon as he shared the news, I placed a pre-order on the website.

Wingspan: European Expansion introduces 81 new bird cards, a few extra bonus cards, more end of round goals, the purple eggs, additional food tokens, another card tray, more automa cards, and some other bits and pieces. So far there is nothing particularly surprising.

The new egg colour does look lovely, but doesn’t add anything to the gameplay, as all eggs are made equal – just some more equal than others. The additional food tokens are also nice to have, but not essential. However, it is nice that two more storage boxes were included, as it allows you to split the resources more evenly and place them in easy reach of all players, which is especially great if you play at the five-player limit.

The expansion also comes with another card tray, with lid. Its colour compliments the new purple eggs, and you do need more room to store all your cards. With the extra 81 bird cards, there is no longer room for the bonus cards as well. However, if you want to store everything in the original box, you won’t be able to fit in the second card tray as well. I ended up putting all bird cards in the original tray, then put the bonus cards in a baggy, keeping the new tray in the expansion box, which in turn I put away for storage.

Everything else fits easily into the original box, with a bit of imagination, so you don’t need to have both boxes to hand, which is great, especially for me who only has so much cupboard space.

Of course, the expansion doesn’t just offer more of the same. There is now a new bird card colour – teal. Birds with that colour activate at the end of a round, which is neat and something you can easily forget in your first couple of games. To help remind you, there is a little piece of cardboard that has the end of round steps listed in the order you need to take them. I strongly recommend you have that next to the end of round scoreboard, so you don’t forget to use the new end of round powers.

There is more though. There are also new bird powers for the colours we already know. Some birds are able to steal food from other players, some can cache food based on the number of birds of a certain type of another player. So whereas previously players could gain food from another player’s brown bird power, you now do have to pay more attention to what other players are doing, to avoid losing resources, which makes the game a little bit more competitive than before.

Some birds also have a special food cost, allowing you to discard bird cards from your hand instead of paying food tokens. In fact, I felt there seems to be a lot more emphasis on having bird cards in your hand in the expansion. I would say there are now more birds that allow you to tuck more cards than before, on top of being able to use cards instead of food for some birds. There is even a new end of round goal that is based on the number of bird cards in your hand.

Speaking of end of round goals, many of them seem to have been designed for the green side of the end of round scoreboard. If you play with the blue side, you will easily reach the maximum of five points for the goal that is for the food cost of played bird cards for example – even in the very first round. The goal that gives you points for bird cards in hand is also quite easy to reach when you’re on the blue side.

As my wife and I always play on the blue side, that’s a bit of a shame, but I guess for more competitive players, who always use the green scoring option, these new goals will create a new, interesting way to compete for points, especially in the later rounds of the game.

The new bonus cards are a welcome addition. Two of them focus on the bird card colours, the others are about food cost, habitats and tucked cards. I wouldn’t say they create radically new ways of scoring, but create interesting ways to gain end of game points.

Speaking of bonus cards, the addition of the 81 new birds hasn’t affected the percentage shown on the old bonus cards to any major degree. I believe there may be a one or two percentage point change for some of them, but nothing too drastic to majorly affect your decision about which bonus card to choose.

So overall I would say Wingspan: European Expansion adds interesting variations of existing mechanisms to the game, which will make this expansion also attractive to people who aren’t particularly interested in European birds. Of course, if you live in Europe, your main reason for buying this expansion will probably be the new birds that you are more familiar with, and you will get the extra benefit of the new bird powers and other new content.