It’s the 11th of July in the year of our Lord 1899. At 10am Mountain Daylight Time, the Union Pacific Express departed Folsom in Union County, New Mexico as scheduled, but only a few minutes after leaving the village’s last buildings behind, heavily armed bandits started robbing the 47 passengers, taking purses and jewellery. A short while later, gunshots could be heard and some of the bandits had climbed onto the roof of the train. It was feared that Marshal Samuel Ford, who was protecting the Nice Valley Coal Company’s weekly pay, was being attacked. The whole incident went down in history as the “Attack of the Colt Express” by Christophe Raimbault from Ludonaute. 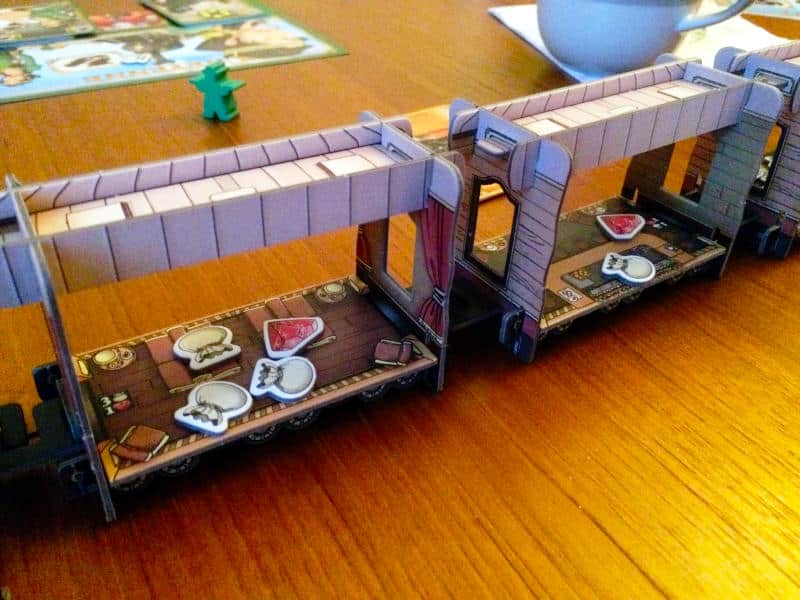 After having played the game online (thank you again to Jamie Adams for introducing me to it), see my Digital Eyes review for more details, and being told that the physical game came with a 3D cardboard train, where the bandit and marshal meeples would walk around, pick up loot, climb onto the roof and carry out all their actions, I just had to buy a copy. I knew it would not only be very eye-catching, but also be the sort of game that I could play with the whole family, children, parents, grandparents, in-laws and everyone else.

After the game arrived and I had shot my unboxing video (because, well… 3D cardboard train) and I saw the train in its full glory, I knew I had to take it with me to every family gathering. I had to bring it out at every other possible opportunity to play it with the family. I was so pleased to see when it didn’t take much convincing my brother and sister-in-law and their daughter to join my wife and my mother-in-law for a six-player game of Colt Express.

My niece took care of setting up the scenery consisting of cardboard standee cactuses, animal skulls, rocks and distant mountains. I set up the train, distributed the loot and asked everyone to choose one of the characters. I decided to play without the special player powers that each character has, just to keep it a little simpler for the first game.

I’m not great at teaching rules, but Colt Express is really simple, because it is so very visual. You have your meeple in the 3D train, so you can see where you are and where you can go. The cards all have icons on them, which are really obvious what they do: move along, move up or down, shoot, punch, pick up loot or move the marshal. I only had to explain about the movement and shooting inside a carriage versus on the train’s roof. That was pretty much it.

It was only when we started playing that I explained the round cards. They prescribe how many cards are played and whether they are played face up or face down or whether you go in anti-clockwise order, as well as what happens at the end of the round. I explained about being able to draw three cards instead of playing one only after we had played a whole round. So we got into the game really quickly. Everyone started playing their cards. Nobody was 100% certain about how it all worked until we resolved the first round’s cards. After that, everyone started to see what they needed to do and how punching someone would affect their plans.

It was wonderful to watch a group of people with a wide range of ages and experiences with modern board games pick up the rules to Colt Express so quickly and enjoy themselves so much. Some people got really competitive about picking up loot. Others focussed on being the best shot to gain the $1,000 bonus at the end. Others just tried to move the marshal and get others into trouble. However, everyone got something out of the game and you had the usual sibling rivalry. There were moments when you didn’t want to punch your mother-in-law’s or your wife’s characters, but you had to choose one of them. There were all the things that make Colt Express so much fun in a family setting.

The programming mechanism is also really great. When you understand what the cards do and how they can really affect other people’s plans, the metagame develops and you’re trying to work out whether another player is likely to punch you or someone else. You also know that certain cards you play will be able to be used in a couple of different ways, depending on what has happened up to the point it gets resolved. After all, you can move a long way on the roof. So even if you get punched, you can usually still get to where you wanted to go.

We also played Colt Express with our neighbours and they really got into it too. We decided to play the second game with character powers. That adds another level of strategy and tactics of course. It was just as hilarious to see people punching each other and Cherokee picking up loot at the same time, while Django‘s gun would push other bandits into the next carriage.

The 3D train looks really great on the table and is definitely a draw for people. However, it can also be in the way and block people’s view of what cards are being played or being able to see the round card. So you’re best putting the train and carriages off to one side, while the players sit on the other. That way everyone can see the train, the loot, the meeples and the cards. It really works that way, but isn’t necessarily the most obvious way of setting it up.

As you can tell, I still love Colt Express and I’m really pleased to have a physical copy of the game now. The 3D train is definitely not a gimmick, even though it certainly has a toy appeal. For visual people, like myself, it really enhances the experience.

So, if you want a great programming game that is easy to teach and learn and pretty quick to play that will appeal to a wide range of people, then you won’t go wrong with Colt Express.