“Hands up! Give me all your money!” you shout at the passengers on this express steam train to Colt City as you wave your revolver from side to side. You’re in for a big haul and already imagine how you’re going to spend all this money and how you’re going to pawn the jewellery and become rich – but you hadn’t expected the marshall being on board, as well as other bandits going from coach to coach trying their luck at getting rich quick at the same time as you. Your carefully planned heist seemed to quickly go off its rails and you begin to consider jumping off this fast-moving Colt Express by Christophe Raimbault from Ludonaute. 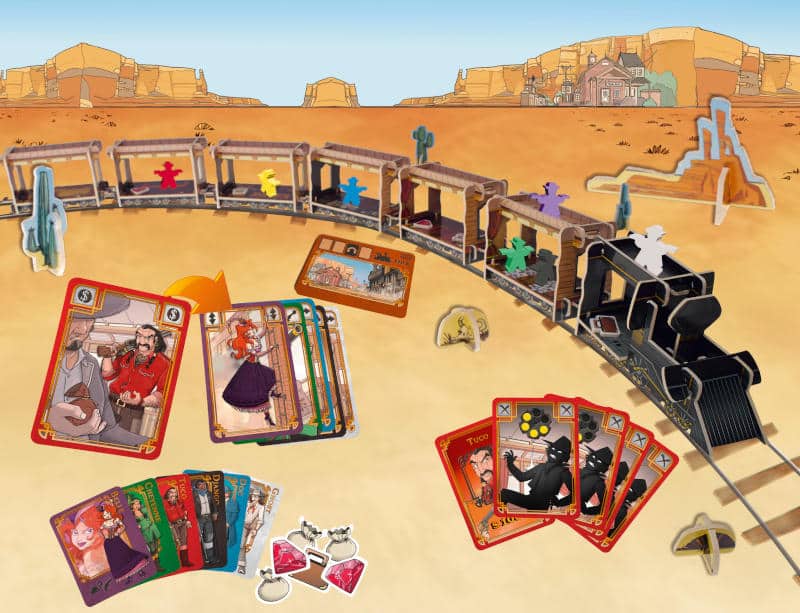 Programming games aren’t for everyone. It can be hard to plan several steps ahead and try to predict what everyone else does, while keeping in your head what the game state is going to be based on your calculations. However, the great fun of programming games is that what you’ve planned in your head and therefore the actions you’ve carefully chosen in a specific order will, inevitably, not pan out as you had hoped. As another player goes left, rather than right, your next action will go nowhere and everything else then goes awry from then on.

That’s what makes these games so much fun for me, at least, watching your character punch into thin air or trying to go one direction and running blindly into a wall, while everyone else’s actions end up not being any more successful than yours. At the same time, it’s awe-inspiring when someone’s actions pan out exactly as planned and the whole sequence feels like a highly detailed ballet choreography.

Colt Express fits this bill perfectly and it offers a few extra things that other programming games don’t have. Sure, there is the usual playing of cards in order to lock in what actions your bandit meeple will carry out when. Once all the cards are played, they are resolved in order and meeples are moved around the train accordingly, or loot is picked up to give you more points.

However, cards are played face-up, at least most of the time, so you can much better predict what’s happening and therefore feel like you have more control, even though that’s not completely true. Everything becomes a lot more uncertain when players choose a movement action – either for themselves or for the marshall meeple. There are usually at least two different options for movement, so you do still have to gauge where you think the other player will go, but it’s definitely not a certainty.

More uncertainty is added when in some rounds some of the cards players choose are placed face-down. Now you not only have to try and predict what action the other players will have taken, but if it’s a movement, where they will have moved to.

It’s this uncertainty that creates the moment of suspense in Colt Express. Everyone is pretty confident that they have chosen the correct card for themselves, only to find that someone else has done something unexpected and everything you do from the on is just useless.

You do get some control back though. As cards are evaluated, when your card is a movement card, other than going up or down that is, you can decide which way you will go. So even if you originally planned to go forward, towards the locomotive, you can still decide to go the other way if it’s clear that you’d be heading into a trap if you didn’t change direction. The problem is, your subsequent cards might now not be quite as effective as you had planned, but at least you’ve dodged a bullet – quite literally actually.

Yes, there is quite a lot of player interaction in Colt Express. You can decide to shoot your revolver and quite often you can even decide which other player you want to hit. That player will then get a bullet card added to their deck, which is basically a way of polluting your hand with useless cards, effectively slowing you down. You can also punch another player, at which point they will drop one item of their loot, which you can potentially pick up yourself, if you have timed it right.

There is also a marshall meeple in the game, which every player can control by playing the relevant card. You can then move the marshall and if they get into a carriage where other players are, their meeples have to scarper onto the roof of the train, thereby really messing up their plans. They will also get a bullet card added to their deck.

So, yes, you can create a lot of havoc in Colt Express, but if you can predict what other players are likely to do and if you are good at bluffing, you can pull off the perfect sequence of actions to give you the most and the most valuable loot.

To add further to the fun, the game comes with a number of different characters, each of which has their own unique ability. Ghost, for example, always plays their first card face-down, giving them the advantage of surprise. Cheyenne‘s punch not only forces the other player to drop an item of loot, but that item is immediately snatched by Cheyenne to add to their stash. None of these abilities are super powerful, but they add just enough variability to make the game just that extra bit more interesting.

I only played this game online, but I was assured that the little 3D cardboard train, where the game’s actions take place, really looks amazing on the table and lifts the game experience to another level – quite literally. Sure, you could play without, but it’s clearly much more fun to take your little wooden bandit meeple out of one of the carriages and make it climb onto the roof. It’s so much more visual and much easier to follow the action as the cards are resolved. Well, at least, that’s how I imagine it. I’m still looking to get my own copy of Colt Express and I will make sure it comes with the cardboard train.

Other than the element of chaos that the programming in Colt Express creates, the wonderful 3D cardboard train and the custom wooden meeples, it’s also the playing time that I love. Games usually take around the 45-minute mark, depending a bit on player count and how fast people play. That’s the perfect length for this game and is just short enough to get two or maybe even three games played in short succession.

As I said, I’m looking for my own copy of Colt Express, which I think shows you how much I like this game. It’s really easy to teach and quick to play, making it ideal to play with pretty much anyone. So, shoot your bullets, take your loot and avoid the marshall as well as the other bandits and become the best train robber in history.