Inspired by a recent #ThrowbackThursday tweet from Board Game Inquistion I thought it would be nice to write about one of my own game related memories from my childhood. Like probably most kids of my generation, I grew up with all the usual classic tabletop games, or boardgames as they were known then: Monopoly (of course), Game of Life (a friend had that one), Chess (I always lost, until one day), Checkers (when there was really nothing else), Ludo (the dice chucker), Stratego (chess on steroids) and probably a few more. 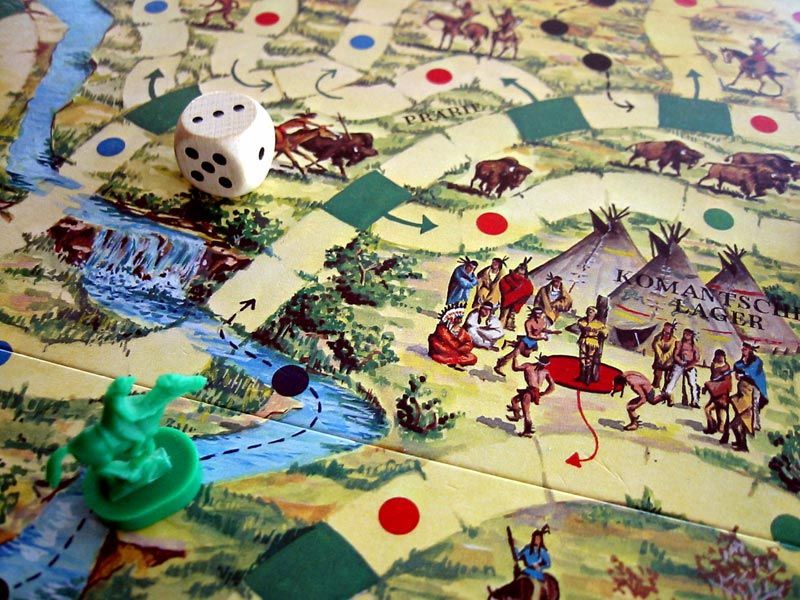 However, my family always liked to play games, and not just board games, so I also grew up with some less well known games, including Ogallala (aka Up the Creek), Winnetou (by F. X. Schmid), Das Börsenspiel (a sort of economics simulation by Ravensburger), Mah-Jong (no, not the pair matching app version, but the original one that people play in China), and some others that I can’t remember.

In fact, it was my older brother that I played most often with. He tried to teach me strategies, encouraged me to play competitively while keeping it fun and it is him whom I have to thank for having enjoyed playing games virtually all my life – maybe with a gap of 10 years or so during my late teens and early twenties. In fact, he was always inspired to improve games where possible. Monopoly was a bit of a lost cause, but he was able to tweak other games to make them more interesting. No, I can’t remember what games or what he did, but I recall being impressed.

Yet, he didn’t stop there. He went on to mash games together, take resources or items from one, plus a few mechanisms from another, a game board from a third, and then some additional rules he made up himself and, hey presto, we were suddenly playing a completely new game. Of course, these new games had to be tweaked over time, but it was amazing to watch him create something that no one else had. I would try and add ideas, when I was a bit older, so it became a joint effort, and I even tried to do my own mashups, but they were never as good as his.

Eventually he created his own game – from scratch, but of course with inspiration from other games. He made up the rules, drew a couple of game boards on cardboard, backed with styrofoam (yes, the little beads would come off a few at a time whenever we played), wrote and cut out event cards from a glued together double layer of squared paper and even added little sticky triangles to pins to use as flags.

I don’t recall the name of this game, but it was basically a world economic simulation where you bought goods from the market in one country, shipped it somewhere else to sell it again for a profit. The prices of goods would go up or down in the relevant countries as they were bought or sold, and there were events that would randomly affects the global markets, like a plague of locusts destroying the wheat harvest in an African country (I don’t recall the details), pushing the price up as a result of the scarcity.

Many cards were based on real life events he saw in the news, and he consulted an almanach to check the products different countries produced and where they were exported to. It was all very realistic and even thought there was a fair bit of randomness in the game, you felt like you were a real life trader trying to hedge their bets to avoid losing everything, all the while trying to make the most profit.

So here is to my brother who gave me the imagination and confidence that lead me to this point in my life where I try and contribute to the amazing tabletop games community and enjoy playing games with friends and family. Thank you for being my bigger brother.