KeyForge: Call of the Archons by Fantasy Flight Games is the first Unique game – and the word “unique” has a very special meaning, but I will talk about this later. KeyForge, for short, is a competitive two-player-only card game where players aim to forge three keys, each costing six Æmber. As players draw and play cards, they can attack their opponent and collect Æmber. The player to first forge their third key is the winner. So far it’s very much like any other card game of their kind, but it is the uniqueness of the decks that is new and is what interests me about this game.
KeyForge as a whole contains seven “houses”, and within each house there are many different cards with different abilities. Each deck contains three of the possible seven houses, and then a number of cards of each house, making up a total of 37 cards. Some of the cards in your deck will be exactly the same as in other decks, and certainly some, if not all, of the houses in your deck will match the houses of another deck. However, the exact combination of cards will be unique to your deck – no other deck in existence now, or printed in the future, will have this unique combination of cards. 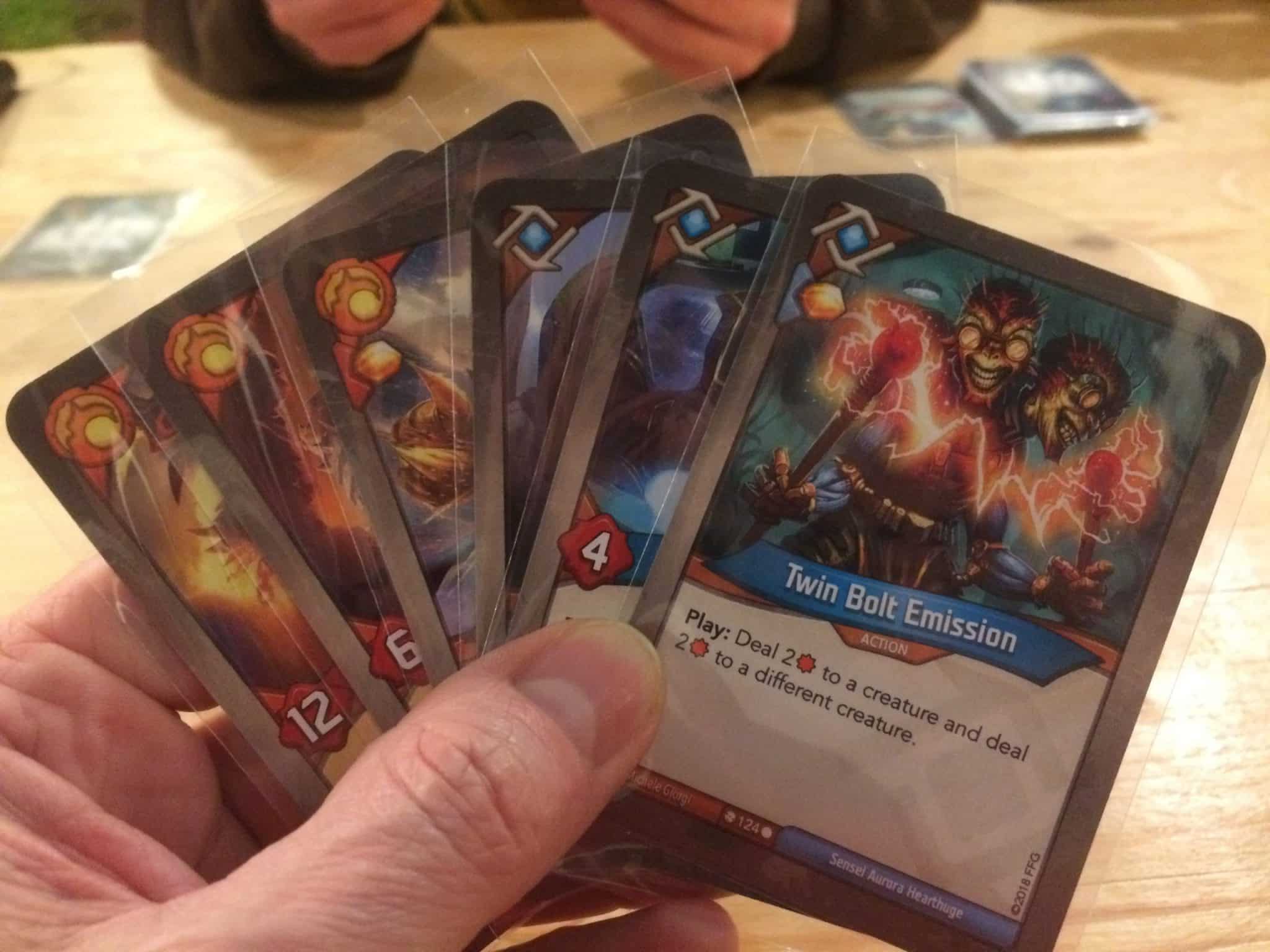 Additionally, each deck has a unique name and logo, which are printed on the back of every card. That is important because it means you can’t simply by a few different decks to create your own, new, custom deck. We are also told that you won’t be able to by booster packs or other cards to customize your deck. The deck you buy is the deck you keep and play with, which is unlike existing collectible card games where you can spend as much money as you want to create a deck that really suits you or that is amazingly powerful.

The jury is still out, but Richard Garfield has designed the game with the aim that all decks are pretty well balanced. There is a handicap mechanism though, which allows people to deal with any decks that are particularly powerful. In fact, there is also the possibily that these handicaps could be different depending on what two specific decks are played against each other. So even though one deck may generally be average, it might be really powerful against a handful of other decks, in which case a handicap is applied, but not otherwise.

For a lot of traditional collectible card game enthusiasts KeyForge is a new beast, and may not be something they like, because they will want to be able to customize their deck to their playing style. However, KeyForge is perfect for players, like myself, who love card games, but don’t want to spend days on end buying booster packs and add-on cards, or trade with friends, and puzzle together the perfect deck, whatever that might be. You buy a deck and you play with it. If you really don’t like your deck, then you can still spend money to buy a new one. The cost of a deck is relatively small.

I ended up buying four decks, but not because I didn’t like the first three, but because it is the decks as a whole that are collectible, rather than individual cards. There is something enticing about buying a new deck and opening it up to see what name and logo you got, and what cards there are. I suppose it’s a similar appeal to buying a Kinder egg, except that you don’t get chocolate and a plastic toy, but a set of cards that you can play against a friend.

You can also use your deck and play it online against other people from around the world. Each deck comes with a unique code which you register on the KeyForge Master Vault website before importing it into The Crucible Online where you can then play it against others. In fact, you can do this with as many decks as you have. So you can practice before you play with friends.

The artwork of the game is also amazing and really fits the theme. In fact, each house has its own theme and having played my four decks with friends now, we had times where the house Mars behaved like the Martians in the film by the same name, not being very powerful individually, but swarming the battlefield and doing lots of little damage.
It’s a great, fun game and if you use your own tokens, download the rules PDF from the Fantasy Flight Games website, you don’t even need to buy the starter pack. So the cost of entry is really low and the more you play your deck, the more you will discover about how best to play it.  I can highly recommend it.