Sometimes I get asked to recommend games for someone to play. As you can imagine, that’s never easy and my first question tends to be what other games they have already played. If they’re completely new to the hobby, I usually ask how many people they intend to play with, whether they’re a competitive group, how long they’re happy to play for. It’s also sometimes good to find out what sort of films, TV shows or activities they like, because many board games have a setting that might fit. So, in this article, I want to give you a list of different types of games that I tend to suggest to people. 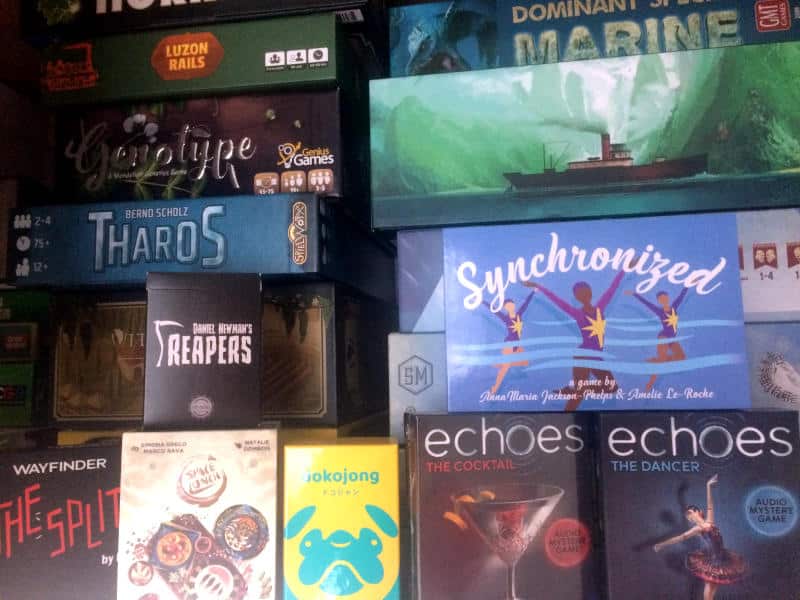 I could have split this article into a longer series and really describe every game in detail, but for now, I kept it as one and I will just give you an idea of why I think a certain game might suit a certain type of people. If you want to find out more about each game, there are links to either one of my reviews or the publisher’s website.

So let’s start with light games, that don’t have a lot of rules and play quite quickly and let’s look at competitive games first.

One game that is usually a good way to introduce people to the hobby is, of course, Fluxx by Andrew and Kristin Looney from Looney Labs. It ticks a lot of boxes. It’s a card game, so it’s easy to take with you and can be played pretty much anywhere, as it doesn’t take up a huge amount of table space. It can be played with up to 6 players as well, which means it’s very flexible and it doesn’t matter if only a couple of your friends show up or if you have a larger group.

Fluxx also basically has one rule, at least to start with: draw a card, then play a card. Everything else evolves as you play and all you really need to do, is read the text on the cards. Sure, you also have to know how to win the game and how new rules replace existing ones, but that’s not too difficult to grasp.

Fluxx can take a little while to play, but it can be over very quickly as well. It really depends on the players and the luck of the draw, but ultimately, it plays so quickly that people are usually happy to play it at least twice back to back. There are also dozens of versions of the game out there, with different settings and themes, that everyone should be able to find one that suits them and their group. It also means that, if you get bored with your Fluxx, you can buy another version that introduces a couple of minor changes to keep things fresh for you and your friends or family.

For people who prefer games where luck plays a bigger role, I always recommend one of the many mint tin games by Kate Beckett and David Rene Miller from subQuark. Mint Tin Mini Skulduggery is my favourite here and I’ve played it many times with my wife and daughter, as well as the wider family. It’s another game that ticks a lot of boxes. It comes in a mini mint tin, which fits into every pocket and the box is sturdy enough to take a few knocks. It’s all about rolling dice and there’s really only one thing you can do to affect the game, so there is not much you have to think about. It also plays in around 15 minutes on average, so it’s really quick and there are only a handful of rules that you need to know, none of which are difficult.

If someone prefers a light co-operative game, then The Mind by Wolfgang Warsch from Nürnberger-Spielkarten-Verlag is definitely a great choice. It was nominated for and won a large number of board game awards and it now also comes in a plastic-free version, if you want a game with some green credentials. It’s another card game, so it’s very easy to take with you and it plays relatively quickly. The rules are also very basic and because it’s a co-operative game, the whole group can learn it together, if anyone is worried about having to teach it to people – but as I say, it’s very simple anyway.

If you’re trying to cater for a group of people who might prefer something slightly longer, maybe with a couple of extra rules, then Quacks of Quedlinburg also by Wolfgang Warsch but from Schmidt Spiele is a competitive push-your-luck game with simple rules that takes around an hour to play. It does take up a bit of space on the table and certainly isn’t a game you can just put in your handbag or jeans pocket. However, it does offer a lot of fun and laughter, because it’s all about working out probabilities, at least roughly, to decide if you should draw one more ingredient out of the bag or stop.

It’s the sort of game where you will learn more about players’ personalities. You’ll see if people like to take risks or are more cautious. It will appeal to people who just want to have a bit of fun playing games with friends or family as well as people who are really competitive and who will plan what ingredients to buy and who formulate their strategy from the start. So it really works for a wide range of people and it’s a great introduction to push-your-luck.

Another fun competitive game that takes a little longer to play and has few rules to learn, but isn’t too taxing, is Colt Express by Christophe Raimbault from Ludonaute. It’s a so-called programming game, where people play cards to determine what their meeple will do and once the cards have been played, the program is executed. Of course, things won’t always go to plan, because there are several players’ meeples that can affect your meeple’s actions. That can lead to hilarious moments where a meeple was going to snatch some loot, but because they were pushed into another carriage on the train, they’re grasping thin air.

The game comes with a 3D cardboard train, which looks great on the table and is a real draw. It also plays relatively quickly, making it easy to play Colt Express two or three times back-to-back. The rules aren’t too difficult, even though the game won’t make much sense until one round has been played and the cards’ program is run, when everyone realizes what the cards mean and how it affects the game. It’s one of my favourite family games, for sure and I have now played it with various groups of people who all enjoyed it.

I want to end the article with a co-operative game that is for those who want something puzzly and are happy to play for around half an hour to an hour, depending on how the game goes. There are a few games in the series, but I think a good one to start with is Forbidden Island by Matt Leacock from Gamewright. The game is pretty easy to learn, but very hard to win. It will keep you busy for some time and you really have to work out how best to work together to gather up the artefacts from the island, before it sinks.

We played it with our daughter many years ago, so I can assure you that it’s a game you can play with children quite easily. In fact, it appeals to a wide range of people who like to work together to solve a puzzle and if the group likes Forbidden Island and wants to try something else, then there are a couple more games in the series that offer different challenges. So there will be a lot more to explore, if you want to.

Now I wonder what games you tend to recommend to people. Or what games have been recommended to you when you started out in the hobby? I’d love to hear from you, so please share your thoughts in the comments below.