Spice, the final frontier. These are the adventures of the Houses Atreides and Harkonnen and the Imperium their five-round mission to explore Arrakis, to seek out new territories and new Spice Blows, to boldly go where no Fremen has gone before. This is Dune: A Game of Conquest and Diplomacy by Bill Eberle, Jack Kittredge, Peter Olotka, Greg Olotka and Jack Reda from Gale Force Nine. 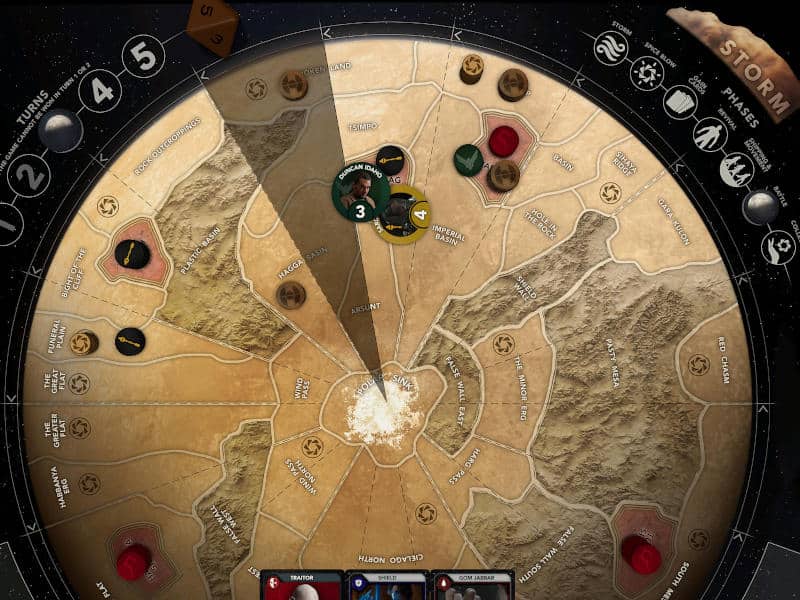 Forgive me for using the very popular introduction to a now-classic 1960s science-fiction TV series to set the scene for this re-make of a re-make by Gale Force Nine of the 1979 epic game Dune from Avalon Hill. I just couldn’t resist using the famous prologue of a long-standing TV and film franchise that has survived several decades, reinventing itself multiple times to try and keep with the times, and apply it to a game that itself was reinvented a couple of times and whose story is based on a book that was adapted for TV and film, most recently for an epic two-part film, the first of which was released in 2021 and which is a great spectacle that fans of the books and lovers of great cinema absolutely lapped up the last drop of.

Gale Force Nine followed Hollywood’s example, but instead of creating a two-part film, they first remade the original 1979 game Dune from Avalon Hill into a much more streamlined version of the game which they released in 2019, forty years after its original release. That version of Dune by Bill Eberle, Jack Kittredge and Peter Olotka is amazing and I reviewed it a couple of years ago. It’s epic, like the book and the films. You can feel the sand under your feet and smell the Spice as you play it.

However, the designers clearly felt there was more they could do to make the game even more streamlined while keeping its essence. So instead of a 1 to 2-hour game, we now have a 30 to 60-minute game, which means it will appeal to a different audience. I reckon there are more people in the hobby who are happy to sit down for a 1-hour game than there are people who love 2-hour games – but I might be wrong.

In any case, Dune: A Game of Conquest and Diplomacy or Dune 2021, as I will call it from here on in, is basically the same Dune from 2019, but with all the complexity removed so that you can play it in half the time. Not only that, teaching it is a lot easier, not only because people are happier to give it a go because it is a quicker game, but also because the rules are actually a lot simpler.

The bidding phase from the 2019 version, where you blindly bid on a card that might be absolutely game-changing or could be completely useless, is gone. Movement is a lot simpler, because there are no ornithopters: everyone just moves a fixed number of territories. Battle is also a lot simpler and actually really sleek, while keeping the 2019’s mechanisms of battle strength, leaders, weapons, shields and, of course, traitors.

The game length is now also compressed from 10 to 5 rounds – or should I say, a maximum of 10 rounds down to a maximum of 5. Even though you can still win by holding a certain number of strongholds, the focus really is much more on collecting as much Spice as possible and being the richest at the end of the game. It is rare that a player can control three strongholds until the end of a round. Other players will swoop in and flush them out to prevent a victory, after which the player who was hoping for a military win will be in too weak a position to have any chance of coming back.

So the pace in Dune 2021 is really fast and you have to really get a move on: blink and you’ll miss the game. At least that’s how it feels for me who has played the 2019 version a lot and enjoys the long, drawn-out game where you slowly build up control and carefully advance into new territories. However, the quicker game is really appealing to people who are put off by longer games. As a friend of mine put it: Dune 2021 is the game to get people started on before tempting them with the longer and more involved 2019 version. So, owning both copies can be a good choice, if you can afford it, and you may be able to convert your games group to enjoying longer, more complex games.

Dune 2021 is quite a different beast and even though the essence of the 2019, and consequently 1979, version is there, it does feel really different. At no point did I feel grains of sand in my mouth nor did my nostrils fill with the sickly sweet scent of Spice. It was very much about dropping troops, heading towards the nearest Spice Blows, killing your opponents in the process and harvesting as much as possible. It was a lot more about battle and market cards.

There is no strategy to worry about and while the 2019 version of Dune is also quite heavy on the tactics front, the 2021 game really puts the focus on putting out fires and responding to the situation on the board when it’s your turn. There is no planning really, but even more crucially, there is no diplomacy at all, even though the game mentions it in its name – and that’s probably what I miss the most in the latest version of the game.

I really enjoyed all the subtleties in the 2019 Dune, how some factions have access to certain information that other factions don’t and how the rules even say that one faction can take notes and make the most of the information they gather, while the other factions aren’t allowed to write anything down. Additionally, being able to form an alliance with another faction and be able to use some of their special powers adds another really exciting level to the 2019 game that makes for uneasy pacts that both sides know will eventually be broken, because ultimately, there can only be one winner.

One last thing to note: I only played Dune: A Game of Conquest and Diplomacy in digital format. A friend of mine has the physical copy, but I’ve not seen that yet. So this review focuses purely on the gameplay and not the components, table presence or anything else that a physical board game has to offer. I also found it hard to play online, because the cards have a lot of text on them, which isn’t easy to read on a computer screen. However, if you have the physical game, you will find it a lot easier and I don’t think it will be a real problem.

So Dune: A Game of Conquest and Diplomacy will appeal to people who want to play a game set on Arrakis and whose artwork is taken from the latest film and who want something quick and… well… dirty. Just don’t expect any diplomacy and instead prepare yourself for brutal conquest.

However, for me, the 2019 Dune is still my favourite and even though I’ll always be happy to try the 2021 game, if I have the choice, the earlier Dune is what I will always choose. I just need the extra depth that the element of information gathering and brokering presents.