I have mentioned it on this blog before, but my favourite way of being taught a new game is by diving right in. Teach me only the absolute minimum, just so I roughly know what sort of game we’re playing and get an outline of what I’m trying to achieve and then let me start taking my turn. It’s the sort of style of teaching that Paul Grogan of Gaming Rules advocates and it’s probably the best option for demoing a game at a convention as well. 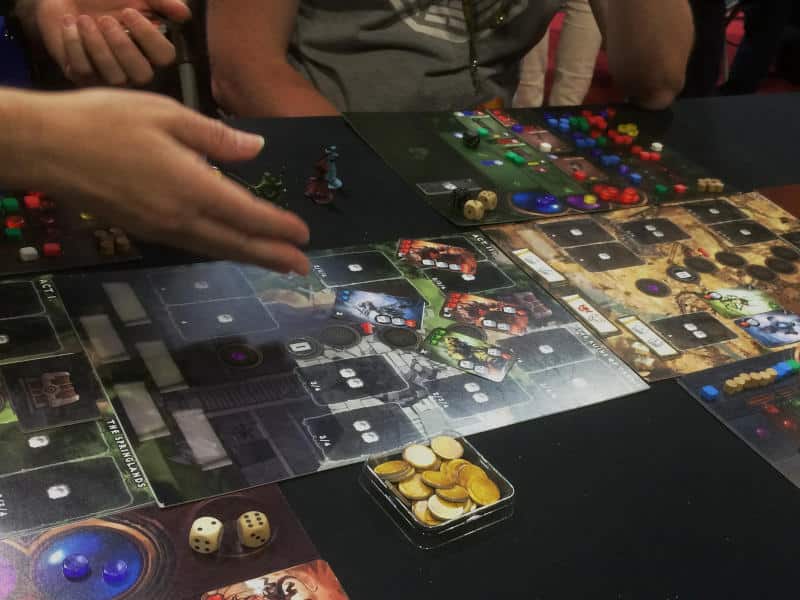 First of all, let me say that this style of learning a game isn’t for everyone, of course. At the end of the day, there is no single way of teaching a game that will appeal to everyone in the world. Some people need to know all the rules right from the start or at least know enough so they can formulate a strategy and have a decent chance of winning the game or they just want to feel they have some agency right from the get-go and that they make their own, intentional choices.

When you learn a game as you play it, you won’t know all the rules. You won’t even know enough of the rules to feel like you know what you’re doing, let alone get any sense of being able to formulate your winning strategy. It can feel quite scary for a player to learn a game this way. At the same time though, you’re delving right in and it won’t take long until you’re in the middle of the game and if you had a good teacher, you’re starting to get what you’re doing and soon you’ll take turns on your own.

So, yes, you have to be brave to want to learn a game as you play it, but I reckon you have to be even braver if you want to teach a game that way. It’s not easy to introduce people to a new game and give them only a rough outline and maybe one or two basic rules, before delving right in. You have to know the game quite well to be able to teach it this way. If you’ve never played the game before, then you probably won’t be able to teach others to play it this way, unless, of course, someone else taught you the game by getting you to play it.

Anyway, if you want to teach a game to others by asking them to learn by playing, you need to be able to really distil what the game is about and know what sort of actions players are likely to want to take at the beginning of the game and what actions are really no use to start with, but become more important later in the game. Generally speaking, you want to pick out those rules that are vital at the beginning and leave other rules to later.

Can’t teach it all

The problem with this is, of course, that sometimes there are rules that you will teach players later in the game, but that will actually affect whether someone will win or not. For example, there may be certain types of actions players can take that will give them victory points, but if those actions are basically not an option at the beginning of the game, then you might as well talk about them closer to when they become a possibility.

That will lead to moments when players will tell you that they would have done things differently earlier in the game, if they had just known that these victory points were available to them, but players have to remember that the idea of this type of rules teach is about not overloading people with rules to start with, but slowly introduce them to things as they become relevant.

Also, we all know that the first time we play a game, it’s a learning game, but it’s easy to forget that. Yet, when you teach a game a bit at a time, then it’s especially important to remind everyone that this is their first game, that it is a learning a game and that it is highly likely that they would have done things differently, if they had known all the rules from the start. It’s almost inevitable with this style of teaching.

As players start to take their turns, you, as the teacher, need to tell them the different options they have, with a rough link to how the different actions will affect the game and may be useful to win the game. You may even suggest a certain option over another, just to guide a player a little, but you have to be careful, because you don’t want to take a person’s agency away from them. Yet, as it can already be quite scary to learn a game as you play, it might actually be quite helpful to players to get some tips as to what they should do, at least at the beginning of the game.

As the game progresses, you will be introducing new rules, types of cards, actions or terminology. You need to try and tie them back to rules players already know. For example, if players have already learned about the currency in the game and there is something happening soon that might force them to forfeit their money if they have too much, it might be worth pointing it out in time and explaining how players can effectively spend their money on something useful. You want to avoid players being completely surprised by a new rule or event, especially if the new rule or event has a negative effect on the outcome of a game for a player.

The process of teaching a game by playing it is a really fine balance of explaining enough, but not too much – but also not too little. If you do it well, it can be a really good experience and be the best way for people to learn a new game. That’s especially true for people who are new to the hobby or for whom board games aren’t a major way of spending their free time. If people don’t want to sit through half an hour’s or hour’s rules teach, then teaching the game by getting people to play it is perfect.

Some games will lend themselves better to teaching this way, of course, while others are very difficult to learn by playing. Some games actually come with a sort of “learn-as-you-play” demo mode. I mentioned this in my last article, “Teaching games – learn yourself“. If you do have a game that has a sort of demo mode, then maybe use that to learn it yourself and then try and teach it to others that way. The problem with demo modes tends to be that players have to take specific actions, which isn’t really what you’re trying to do. Those sort of demo modes take the player’s agency away from them and you’re all just following a prescriptive script.

When I teach a game to my wider family, I tend to choose games that I can teach in this way of getting people to learn as they play. Games with very few rules are ideal, of course, but there are more complex games that you can teach this way. You just have to do your homework and know the game pretty well, so you can point out the important bits first and then explain things as you go along. It’s definitely worth trying.

I wonder if you have ever taught a game this way. As I mentioned in the introduction, learn-as-you-play is quite common at conventions when someone demos a game to you. So maybe you’ve experienced it in that environment or maybe someone in your games group has taught you this way. I’d love to hear your experiences with “learn-as-you-play”, so please share them in the comments below.