Oh no! Wizard Pebbledash’s assistants, Kevin and Annabelle, are missing! Of course, it is our task to find them and return them home safely. We are a motley crew of four daring adventurers of all shapes and sizes. Some of us have brave hearts, others have strong minds and there are some here who have a keen eye, but all of us are in high spirits and ready to face the dangers ahead of us. So off we go into the shadows of Hoodez Dungeon on our first CoraQuest by Cora and Dan Hughes. 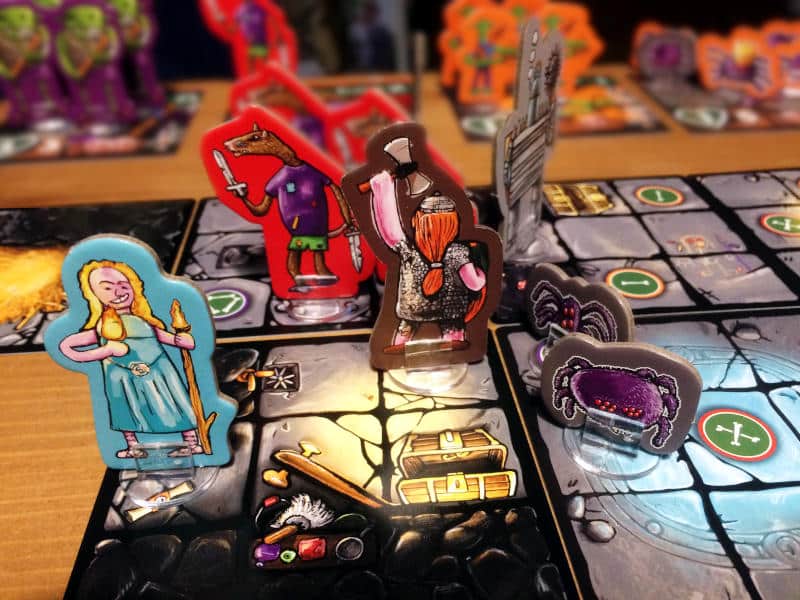 What an introduction! I think we can all agree that CoraQuest was keenly awaited by many of us – over 5,000 backers apparently. It made headlines on local news, the BBC no less, and deservedly so. What started out as a homeschooling project quickly became a sensation and the pressure to deliver something amazing mounted as the project progressed.

Not only was it a collaboration of father and daughter team Cora and Dan Hughes, but many people from the board game community also submitted their drawings and ideas to be included in the game. It was wonderful to see everyone getting involved and being excited about this game. CoraQuest quickly became the hobby’s darling and with its name tried to live up to another famous dungeon crawling adventure board game, which was popular in the 1980s and 90s and which recently got re-released in all its glory. The timing for CoraQuest couldn’t have been better.

Of course, the question is whether it delivered on its promise.

So let me start by describing what I think CoraQuest is. First and foremost, it’s a classic dungeon crawler. The heroes walk around in the dungeon, open treasure chests, try to avoid traps and fight monsters until they reach their goal. There is dice rolling to resolve battles, there are character stats and there is text to read that sets the scene and describes the story.

However, unlike its namesake, there isn’t a single player who takes on the role of the enemies, but instead, everyone as a team decides what the monsters do, following some basic rules and rather than having a fixed board that represents the dungeon, you have a deck of square tiles that are mostly random, with certain cards mixed in at certain positions that trigger the next chapter in the story.

Suddenly, there is no us against them, no shield to hide your notes behind, but everyone works together and tries to win. The monsters’ actions are kept basic: they attack heroes if they can or they move to the nearest hero if they can’t. It’s all really simple and allows players to focus on the game.

In fact, CoraQuest as a whole is kept simple, so people with a wide range of board game experiences and from a wide range of ages can quickly pick up the rules and get started. Yet, it’s not so simple that it gets boring. Beating the game is relatively easy for the first adventure, but gets progressively harder with subsequent ones. So you don’t immediately get put off by losing on your first attempt, but you continue to be challenged as you progress.

The game comes with a book of 10 adventures, which you should probably play in sequence, because there is a story arc across them all, but you could decide to pick one that sounds most appealing to you and, of course, you can easily replay adventures multiple times to your heart’s content, without knowing exactly what’s going to happen next.

That’s because the dungeon you explore is different every time. There is a stack of dungeon tiles that is set up at the beginning of the game and consists of three dungeon cards in four stacks, plus a fourth card in each stack that is also part of the dungeon and triggers the next section in the story of the adventure you’re playing. You shuffle each stack individually, then put each stack on top of another to give you a deck of 16 cards.

So when you explore the dungeon, you roughly know when the next scene in your adventure might happen and you roughly know when you get to the end of the dungeon, but you’re never certain and you never know if the next card spawns a bunch of monsters that you need to fight or if there is treasure to be found. So even though the adventure story itself is the same, what you discover and in what order changes, allowing you to replay a scenario as many times as you want.

Additionally, there are eight heroes that come with the game and you always choose four of them for every adventure, dividing them up between all players as equally as possible. Sure, depending on player count, one of you might end up with more hero characters to control than other players, but as CoreQuest is a co-operative game, that shouldn’t be too much of a problem. Every hero has slightly different stats, so you can choose the four that you think are best placed to make it to the end of the dungeon alive or you can just choose those characters that you most identify with.

Speaking of which, there really is a wide range of heroes, both male and female characters, animal heroes and also a character in a wheelchair and nowhere does it actually say if a hero is male or female, so you can decide what gender they actually are.

It doesn’t end there though. The game wants you to make it your own and customize it further. There are tips on creating your own heroes and monsters, there are blank cards that allow you to add new items and treasures and there are tips on what sort of stories you might want to create yourself and how you could use the dungeon cards to make it all come to life. The possibilities are really endless and even though there is a set of adventures to get you started, CoraQuest is really much more like a sandbox where you can let your imagination run wild.

The game can also be played by yourself, of course, like pretty much all co-operative games, and even though I’m not much of a solo player myself, I can really see myself getting out the box, choosing an adventure, selecting my characters and setting everything up for a quick 45 minutes of fun fighting monsters, collecting treasure and making it out alive.

There is one more note that I would like to add before I come to my conclusion: when I played the game with my wife and daughter, we were wondering if it was possible to have one of your group not only read out the story but also control the monsters, turning CoraQuest into more of a traditional dungeon crawler like its namesake. We’ve not tried it yet, but I don’t see why there couldn’t be one of you who makes up a new adventure, reads the introduction and chapters, assembles the dungeon deck to their own specification, decides whether monsters attack or move and generally is the heroes’ opponent. I think it could work really well and is something I want to try at some point.

In any case, as it is, CoraQuest is an absolutely wonderful game and all the hype it received in the run-up to being published was completely warranted. The illustrations are glorious, the involvement by the board game community really shines through and everything is so simple to make it very easy for a wide range of people to get into it quickly and get out of it what they want out of it. I can only recommend it and I know I’ll be playing this game for some time to come.

So, the story continues…