“Carefully now,” you mumble as your hand reaches into the bag of ingredients. “That’s it,” you mutter as you pull out another pumpkin piece and add it to your bubbling pot. “One more, just one more,” you say to yourself as you pray that the next ingredient won’t be another cherry bomb. It would be disastrous. You have plenty of toadstools, pumpkins, crow skulls and emerald spiders in your bag, so you should be all right. “Come on, come on,” you pray as you slowly withdraw your hand and reveal the ingredient you hold. “Oh no!” It’s a cherry bomb of course and with a loud bang, your pot explodes. Now you have no chance of competing with the other Quacks of Quedlinburg by Schmidt Spiele. 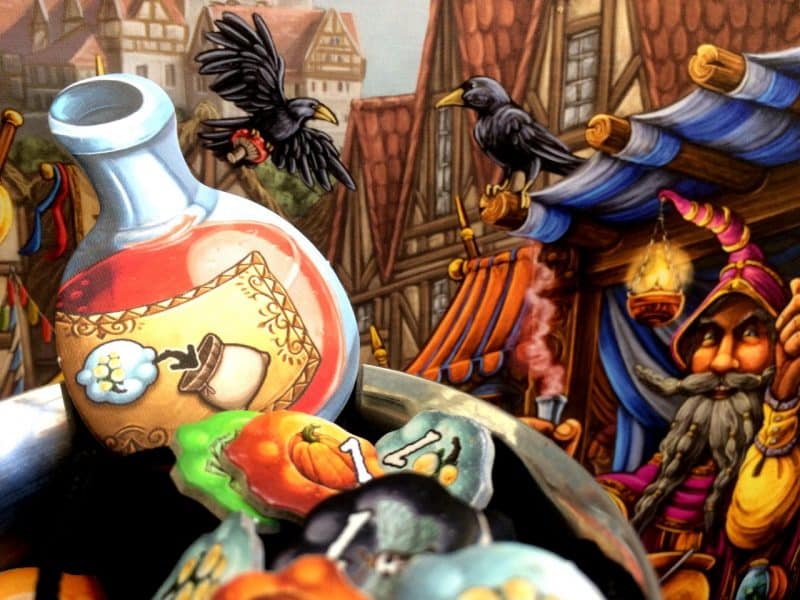 Here is a game that has received a lot of praise and has been popular for a long time – and for good reason. It’s a game that relies heavily on luck, which means it levels the playing field, giving everyone an equal chance of winning. It is also very easy to learn and relatively quick to play, making it ideal for families and really anyone.

Yet, it’s not just luck that you need. You also need to decide when it’s time to stop, so that your pot doesn’t explode, and then think about which ingredients to buy. The more ingredients you add to your bag, the lower the chance of drawing dangerous cherry bombs. That’s obvious, but not all ingredients are made equal. Some are better at reducing the risk of explosions, but are usually more expensive, while others help you get further around your pot more quickly, while not having much other benefit.

There are multiple ways to victory in this game, which is great. You can win just with luck and very little strategy or tactics. That’s a given. However, you can also win by buying cheaper ingredients early on to increase the likelihood of drawing ingredients that are safe. Yet, you can also win by buying more expensive ingredients that allow you to deal with the risk that cherry bombs pose. There are also other strategies, depending on which potion books you play with.

In fact, there is basically a strategy for every type of player, which is another reason why this game is so much fun for a wide range of people, which explains The Quacks of Quedlinburg‘s huge appeal. Of course, if you don’t like push-your-luck games or games with a lot of luck, then this game isn’t for you.

I do wonder how much replayability there is though. Yes, you get four sets of books, that change what the ingredients do and how they interact with each other. That’s definitely great. You can also flip over your cauldron and play with two droplets, one of which gives you one-off bonuses. Again, that helps.

However, ultimately all you do is draw ingredients and place them in your pot and even though it’s a lot of fun, it really doesn’t change from game to game. It’s the main activity and it’s always the same. It gets really boring after a while.

Yet, there is something addictive about The Quacks of Quedlinburg. You always wonder if you have better luck next time. It’s also very tactile to dig into your ingredients bag and riffle through the tokens. It’s nerve-racking when you’re not sure if you should draw one more item or stop. It’s exciting when you draw the perfect token to add to your pot. It’s a relief when you’re not the only one whose pot has exploded.

So even though I do have a limit of how many times in a row I want to play Quacks, after having left it for a while, you do want to play it again.

There is also one major niggle I have with one of the components. The cauldrons, scoreboard and all the ingredient tokens are made of really thick cardboard, which is great. The wooden tokens are also wonderful and the acrylic gems are amazing. The problem is the bag though. It’s a rectangular bag and unless you hold it at about 45 degrees, you will find half of your ingredients get stuck in one corner, while you draw tokens from the other, thereby affecting the luck element hugely. The game could really do with a round bag, more like the sort of coin bag that pirates might have carried their doubloons in. That way the tokens would be easily distributed in the bottom, making it fairer when you draw your ingredients.

So even though I do recommend you get yourself a copy of The Quacks of Quedlinburg if you have a family you want to play with or friends who otherwise aren’t much into the board game hobby, I also want to say that this is the sort of game you want to play a few times, then put away again for a while, so that you enjoy it even more when you do get it out again in the future – and getting it out again you will.