You and your fellow experts had been dropped off by helicopter on the island. It was going to be a rush job, but you were used to it by now. You had to work together to explore the area, find the artifacts and get them and yourself back to the helicopter. The problem was, the water level was rising all the time and this small island was disappearing fast. You did have a diver amongst the group, which would come in useful, but all of you had to shore things up as much as possible to buy yourself some extra time. To add to your troubles, you were on a Forbidden Island by Gamewright. 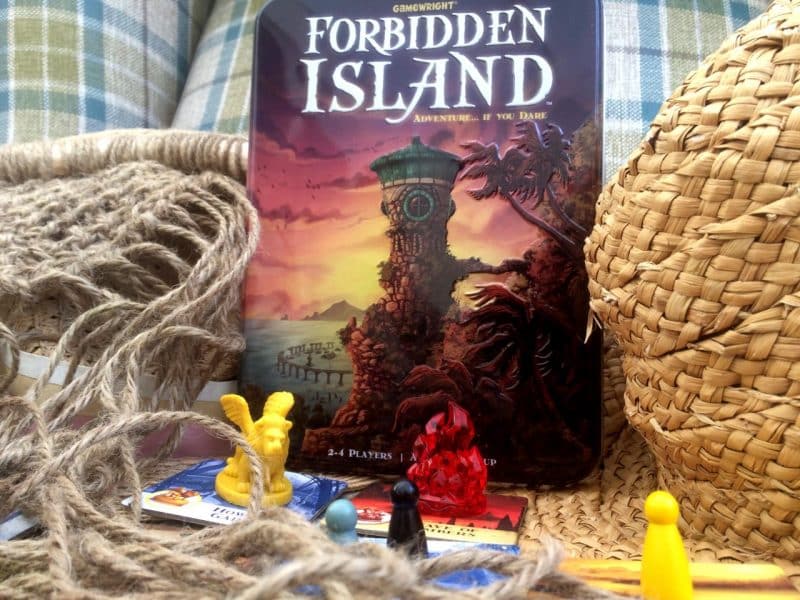 Matt Leacock is well known for designing great co-operative games. His great breakthrough came with the popular Pandemic series by Z-Man Games. You can read my review of the original Pandemic to see what I thought of it. In Forbidden Island, Matt has not been lazy either and created a great family game with a lot of suspense and tension – but let me start at the beginning.

The game puts you in the shoes of an explorer who tries to move around an island, made up randomly of a set of land tiles, to find artifacts and bring them back to the helipad. You all work together to achieve this and once everyone has taken their turn, you draw a number of cards which represent parts of the island that either get flooded or disappear completely.
Everyone takes on a different role, with special abilities, each of which can hopefully help the situation. As you move around the island, you constantly have to decide where to go first and who will do what. Of course, as the island sinks, your plan will have to be adapted to the new situation. It’s much more a matter of tactics than strategy.

You never quite know which part of the island will be flooded next, but once a tile is turned over to show that it’s under water, you know it’s unlikely to disappear completely for a while. It allows you to manage the risk a little and focus on those areas that are already flooded and will disappear completely soon.

Unsurprisingly, Forbidden Island feels very similar to Pandemic. Yet, Forbidden Island has much less moving parts and things to think about. It makes it much more suitable for a wide range of player types and ages. It’s actually an ideal introduction to the genre of co-operative games, and once you have mastered it, you can easily move up to its bigger sibling Pandemic.

The artwork and components are wonderful. If you can get the tin edition of the game, even better. It makes the whole game feel very luxurious and makes exploring the island and fighting the flood a lot more fun and much more immersive.

In fact, the level of immersion is probably higher in Forbidden Island, because you don’t have to think too many steps ahead. You’re much more focussed on fighting to stay afloat than worry about which sets of colours to collect to find a cure. Getting a lucky draw and placing a sandbag strategically is much more important. The quick succession of turns also adds to the feeling of urgency and you can really feel the relentless rise of the water level which threatens to submerge everything in the blink of an eye.

Games are also over relatively quickly, meaning that you can easily play several times until you eventually work out how to get all the artifacts to the helipad before it’s too late.

We have played this game a lot over the years, until our daughter got a bit older and we all discovered Pandemic. So it comes highly recommended, if you’re new to co-operative games and want to give them a go. Definitely try Forbidden Island before you delve into a more complex game.