There are many reasons why people play board games. I have written about this before, but in this article I want to dive into it a bit deeper. Like with any activity, and apologies if I upset anyone when I call playing board games an activity, people do them for varying reasons. Just think of physical exercise. For many, it will be for health reasons, but it’s more faceted than that. Some people might need to lose weight to improve their blood pressure or they exercise just generally to improve their cardiovascular systems. For others it could be a matter of physio therapy after recovering from an injury or people do it to improve their stamina. The reasons why people play board games are just as diverse. 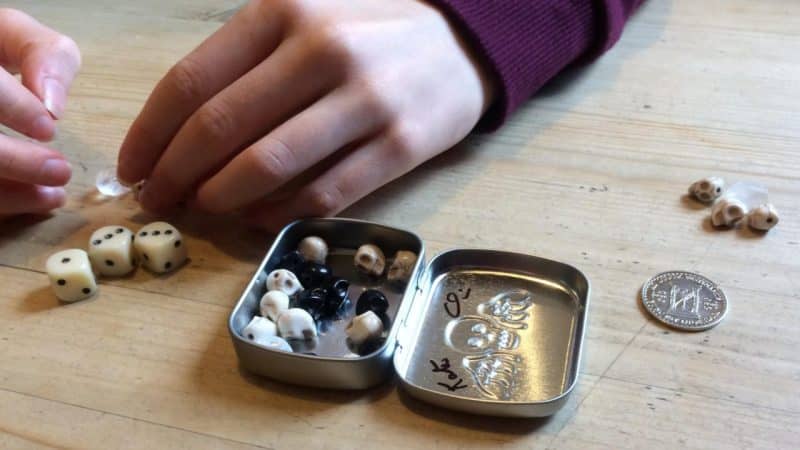 All of the reasons I list in this article will be considered of different importance by different people. So my list is in no particular order, but I do have to start somewhere.

So let’s start with the social element of playing board games. For some it will be about spending time with good friends. It’ll be about having a good chat, maybe having some friendly banter or catching up on what everyone has been doing since the last time you all met. The game itself is usually secondary and the talking will be the main part – before, during and after playing.

Often there will be food and drinks involved as well. So you might have your games night in a pub or boardgame cafe – or round someone’s house. There will be nibbles and snacks, hot and cold beverages, all of which are a way of connecting and enjoying the time together. It’s not much different from people going to the pub, a restaurant or cafe together – or meeting at someone’s house. There just happens to be a game there as well.

That sort of environment also allows to make new friends, and for some people it is actually important to make new friends. Boardgame cafes, conventions and similar environments will help with that, and a boardgame can make it much easier to meet new people, because you all have the love of playing games in general or the love of a specific boardgame in common. It is easier to invite others to a game if you know they either like the game or like playing in general. It also makes it easier to talk to people you have just met, because you have the same hobby in common.

Speaking of talking, for some people the fun is very much in playing the game, but only if there is also a bit of friendly ribbing and banter. It’s a matter of socially interacting in the context of the game – the so-called magic circle of the game. It’s a safe place where you can interact with others, without personally insulting them – or at least, without meaning to personally insult them.

Social deduction or co-operative games can create a similar feeling for those people for whom the game does come first, but where social interaction with others is still also very important and possibly even a critical part of playing in the first place.

Of course, boardgame date nights are also very popular these days. You can spend a romantic evening with your partner and have some quality time together. There are a number of “couples games”, if I may call them that, which are ideal for this way of playing together.

Yet, it doesn’t have to be partners. For some people, it’s important to play games with loved ones – partners, children, parents and other family members for example. It is very similar in that respect to wanting to spend time with good friends.

Now, many of you will be asking about solo gamers. Well, to be honest, a lot of what I have talked about so far will also apply to many solo gamers. Just because you play solo, doesn’t mean you don’t like social interaction. So there is a lot of overlap when you look at why solo gamers enjoy playing games and why groups of people enjoy it, even though people often draw a thick dividing line between solo and multiplayer games, which is a shame.

In fact, there are some things that seem to be attributed specifically to solo gamers, when they’re really also reason why multiplayer gamers enjoy playing board games. One of the first reasons mentioned is trying to solve the puzzle that a game presents. As a solo player you basically play against the game, whether that’s in the form of an AI or just a matter of trying to reach a goal in a certain amount of time, number of turns or with limited resources.

However, co-operative games are really the same thing, and multiplayer games are not much different either.

Whenever you play a game, you try to solve the puzzle presented to you, in the form of creating an efficient engine or populating the largest area or whatever it may be. In a multiplayer game you simply have several people trying to do the same thing at the same time – and often on the same board.

So here is another reason why some people enjoy playing board games – whether solo or multiplayer. It’s about solving this puzzle, about challenging yourself to find an efficient strategy, about responding to events and play tactically or about doing the best you can. It’s the challenge that matters to those people.

You can divide this even further. For solo players it will be about challenging themselves, for multiplayer gamers it’s also about challenging themselves, but probably also about pitting their wits against the others and trying to do better than them, however serious those people might take that – and for multiplayer-solitaire players, it’s very much like for solo player, about meeting the challenge and doing well.

It can feel great when you beat a game or when your strategy really does well – or when you pull off an amazing combo. It could be a single turn when you do well and it can be that turn that you remember afterwards – or it can feel great when you’re trailing behind the others for most of the game, or when it feels like you’re not getting anywhere for a long time, but in the last two rounds you turn it all around and unexpectedly win the game. Again, it doesn’t matter whether this is in a solo or multiplayer game – it feels good in all cases.

Some people also love immersing themselves in a game – in its story – in its world. It’s a sort of escape from the daily thoughts and worries, where you can be someone else for a certain amount of time and think about something else. It goes back to the idea of the magic circle that boardgames create, where you are safe and immune. You can explore a character completely different to yourself – or one that is an exact copy of you. You can explore worlds.

Often it is also about the story that a game tells. Some people just love creating a story from the actions players take in a game and the overall flow of the gameplay. I know someone who can turn even the most abstract game into a deep and fun story. That story can be fun or it can be serious – it can even be sad. It can be the game that tells the story, as you find in so-called “story-telling games” – or it can be the players who actively make up that story as the game progressed. Yet, whatever the story is and how it is created, it gives a huge amount of enjoyment to people who love playing games for that reason.

Great artwork and illustrations are a great help to make a game come to life, and a good theme is often needed to bring it all together. Some people enjoy games mainly because of their theme and their look. It’s very similar to the satisfaction people get from the story-telling or the fact that they can escape for a while – but it’s from a slightly different angle. A good theme coupled with stunning artwork can in itself conjure up stories and really fire up your imagination, making it easy to escape into that world – without even playing the game. Just looking at the box or the game board can be really enjoyable and as long as the mechanisms mesh well with everything else, playing the game will be great fun.

In a similar vein are deluxe components. Metal coins or custom, chunky, wooden tokens, maybe some beautiful miniatures or even shiny acrylic components can all add to the enjoyment of a game. Some people just have to go for the deluxe version of a game and it’s almost vital for them to have those upgraded bits to make the game fun. If you’ve never tried it, then get yourself some metal coins and replace them with the cardboard money in a game and you’ll soon be running the coins through your fingers and enjoy the clink they make as you pay them back into the game’s bank. There will be no going back afterwards.

I already touched on it a little bit, but of course some people love co-operative games. The feeling of working together in a game can give a lot of enjoyment. Even in some competitive games, you sometimes have to work together, at least to some degree, to achieve something. It can give you a feeling of belonging and when you succeed together, it gives great satisfaction – or when you do lose together, it doesn’t feel quite so bad. In fact, losing can spurn you on to try again, because everyone has some fresh ideas of how to win next time.

I reckon there are other reasons why people enjoy playing boardgames. Is there something you enjoy about playing boardgames that I haven’t mentioned? Do you identify with any of the reasons I have listed in my article? Please share your thoughts and experiences in the comments below.