Lightning strikes around you every few seconds, a hurricane is howling around you and visibility is almost zero. Add to that the fact that you’re on a rickety platform 7,000 feet in the air, barely tethered to the barrier rail by rope in an almost vain attempt to stop you from being blown off and plummeting to your death, and it’s obvious why the situation is so precarious. You are desperately trying to get to the launch pad, get into the rocket and get away and to safety – but you are still exploring your route there and you also have to wire up the launch system – and you’re running out of time. You have to be quick and work together to reach the Forbidden Sky by Gamewright. 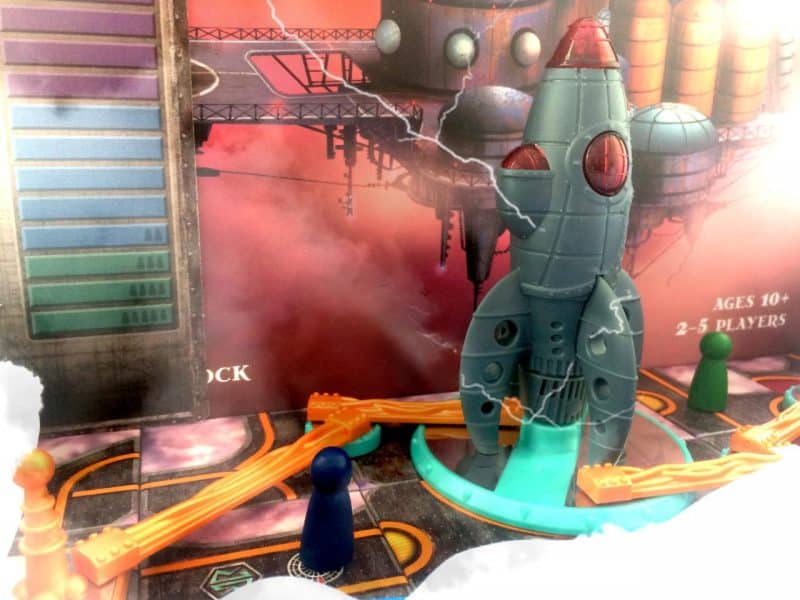 As the latest game in the Forbidden series of co-operative games by Matt Leacock, Forbidden Sky feels very familiar, yet is utterly different to and a lot more unforgiving than its predecessors. So if you’ve played any of the games in the series, it won’t take you long to learn this game, but there are still a lot of new elements added here that will require you to study the slightly longer rulebook.

Let’s look at the differences that make Forbidden Sky stand apart from the other games. First of all, you’re now going to actually make the map of tiles as you play. You will have to decide which of the three tiles that you can have in your hand at any one time you want to place and where – and in which orientation. You need to keep an eye on the wires printed on the tiles, ensuring they are connected, but without you risking being electrocuted the next time lightning strikes – and strike it will.

You also need to make sure you create spaces for the components that will make up the final electric circuit, by placing four tiles, that have a specific pattern on them, in a square, or you will lose the game. It does require to think about which tile you want to go where, but of course, chances are you are in the wrong place of the platform when you want to place a tile, forcing you to spend your valuable actions to move there.

Then you need to wire up a number of these components in a complete circuit, depending on the difficulty level you have set for yourself. That adds another level of complexity that influences your tile placement, because you have to ensure the components are the right distance away from each other and located appropriately so that you can make the circuit with the connectors provided.

What makes Forbidden Sky so much fun, is that you make a real, electric circuit. The landing platform, which holds the model rocket ship and all circuit components have metal conductors, and the rocket ship itself contains a battery and some electronics that control the lights and sound module which will fire if you succeed. It’s so very satisfying to see the rocket do a countdown of beeps and lights, then play the launch sound effect, with the lights flickering. It makes you want to keep playing until you eventually win – or, if you’re us, you just pretend you won and connect everything up regardless, just to see the rocket launch.

Despite the rocket’s cute factor, the game itself is brutal and unforgiving. You will always get so very close, but inevitably you always die just a little bit too soon.

Your health is probably the second weakest link. It can drop way too quickly, but if you have the Medic on your team, you can mitigate some of that risk – at least for a while.

Finally, you can all die if the wind speed gets too high and there is just no hope for the ropes or anything.

Other than the character abilities, there are also equipment cards that help you in your endeavours. These equipment cards can be played at any time, as a free action, making them very valuable, but they are single-use only. A jetpack, for example, allows you to quickly get out of danger or to where you want to be. There are also cards that protect you against lightning, but only for one round. You have to discard that equipment when the turn comes back to you.

So even though the game tries to help you in some way, like in all of the Forbidden games, you can die so easily, but winning is so much harder. Everything is against you, but while in the other games you do stand a good chance of winning on the lowest difficulty level, in Forbidden Sky you really struggle even when you play at novice level.

Once you beat the novice level, if you ever do, you have three more levels to climb. So if you don’t get frustrated too easily, you will really enjoy this game and it will keep you busy for some time to come. Forbidden Sky is a worthy successor in the series.