“…as more people are put into isolation in specifically built camps that are guarded by military personnel and run by medical experts and support staff brought in from around the country. The World Health Organization has so far identified five different viruses in this global epidemic. A number of scientific laboratories across the world are working around the clock in an attempt to discover a cure for them all, while teams on the ground travel to infection sites to gather samples and monitor outbreaks.” You switch off the TV, because you have to return to your fieldwork and help your team find cures in Pandemic by Z-Man Games. 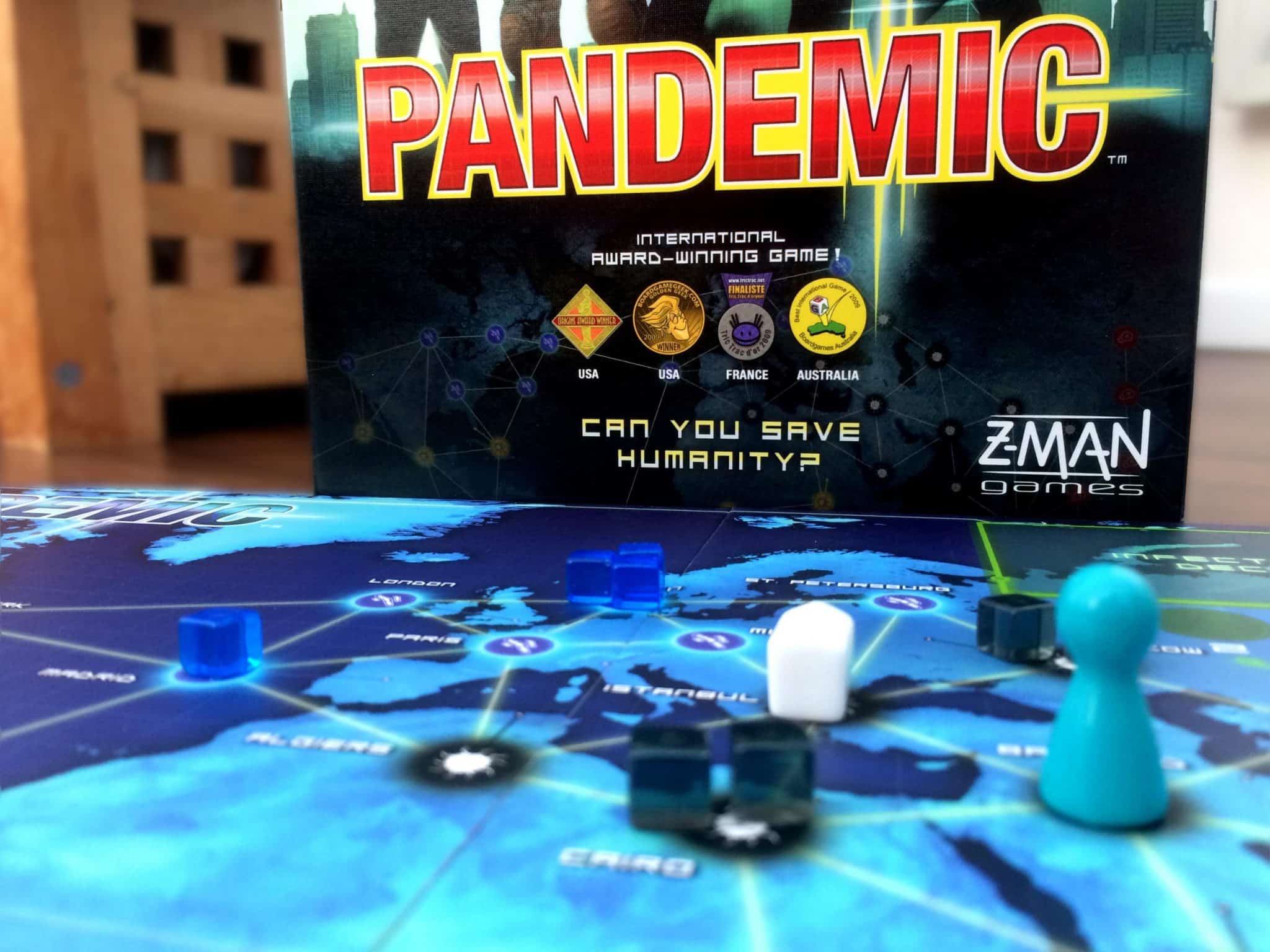 Yes, this is the classic Pandemic from 2008 – not one of the many new releases that have since been released after the big success of the original. I have never played the game until now, despite having talked about it with friends many times before and heard a lot of positive reviews of the original game, as well as the new versions. So when my wife gave the game to me as a Christmas present, I was finally able to find out for myself what it was all about.

Now, as I have mentioned before, co-operative games aren’t necessarily my mainstay, but I have started to play more and more of these types of games recently and have found I actually enjoy playing them, especially with my wife, and I have learned to dial down my alpha player instinct to make the experience hopefully enjoyable for everyone.

I don’t think I have to explain how Pandemic works, so let me focus on the experience that the game offered to my wife and I. First of all, the theme comes across very well. Sure, it could be changed with something else, as illustrated by Pandemic: Rising Tide, but when you draw infection cards and see outbreak chain reactions fill up the board with lots of cubes, you do worry whether a complete travel ban should be introduced to reduce the viruses’ spread.

The constant travel around the board to treat localized infections also adds to the feeling that you’re fighting an endless battle against an invisible enemy. You are constantly having to decide whether to focus on discovering cures and therefore either building new research centres or travelling to the nearest one, or whether it’s better to keep the spread of the viruses under control by making treatment a priority.

The constantly decreasing player deck and the risk of drawing yet another epidemic card really put the pressure on. You always dread the end of your four actions, because not only are you counting down the clock towards the end of the game and the victory of the viruses, you are also worried about intensifying the infection deck and therefore making the pathogens more virulent.

I know people have complained that the randomness of the two card decks can create a situation where you have no way of winning the game, pretty much from the start. However, the game plays in less than an hour, so it’s not a huge investment in time, and I actually feel that the chance of fighting a losing battle adds to the theme. In fact, as you get towards the end of the player deck, you have a pretty good idea if there are enough cards of the right colour left to allow you to win. So you can end the game early and start again.

Actually, given the game length and how close you often get to a win, you do want to play the game a couple of times, if not more often, during the same session. My wife and I usually play it twice in one evening, and over the holidays we played it three or four times in one afternoon.

I think that tells you a lot about how much I like the game. No, there isn’t a huge amount of strategy, a lot of the time you just respond to what’s happening at the time, and meeting up to share knowledge often turns out to be a waste of time as you draw the fifth card of the colour you need to discover a cure, but it all feels very thematic to me and strengthens the experience you get from playing the game.

So I can highly recommend Pandemic to anyone who wants to have a quick game of something that isn’t too taxing, yet at the same time is very engrossing. If you catch the bug, then you can try one of the many successors to the original game.