I absolutely love mint tin games, and Mint Tin Mini Skulduggery by subQuark fits this bill perfectly, as it comes in a properly small, rectangular mint tin, rather than the larger format that many other mint tin games come in. That means it fits neatly into your coat pocket, so you can have it with you at all times. After all, you never know when the opportunity arises to play a game when you’re out and about. 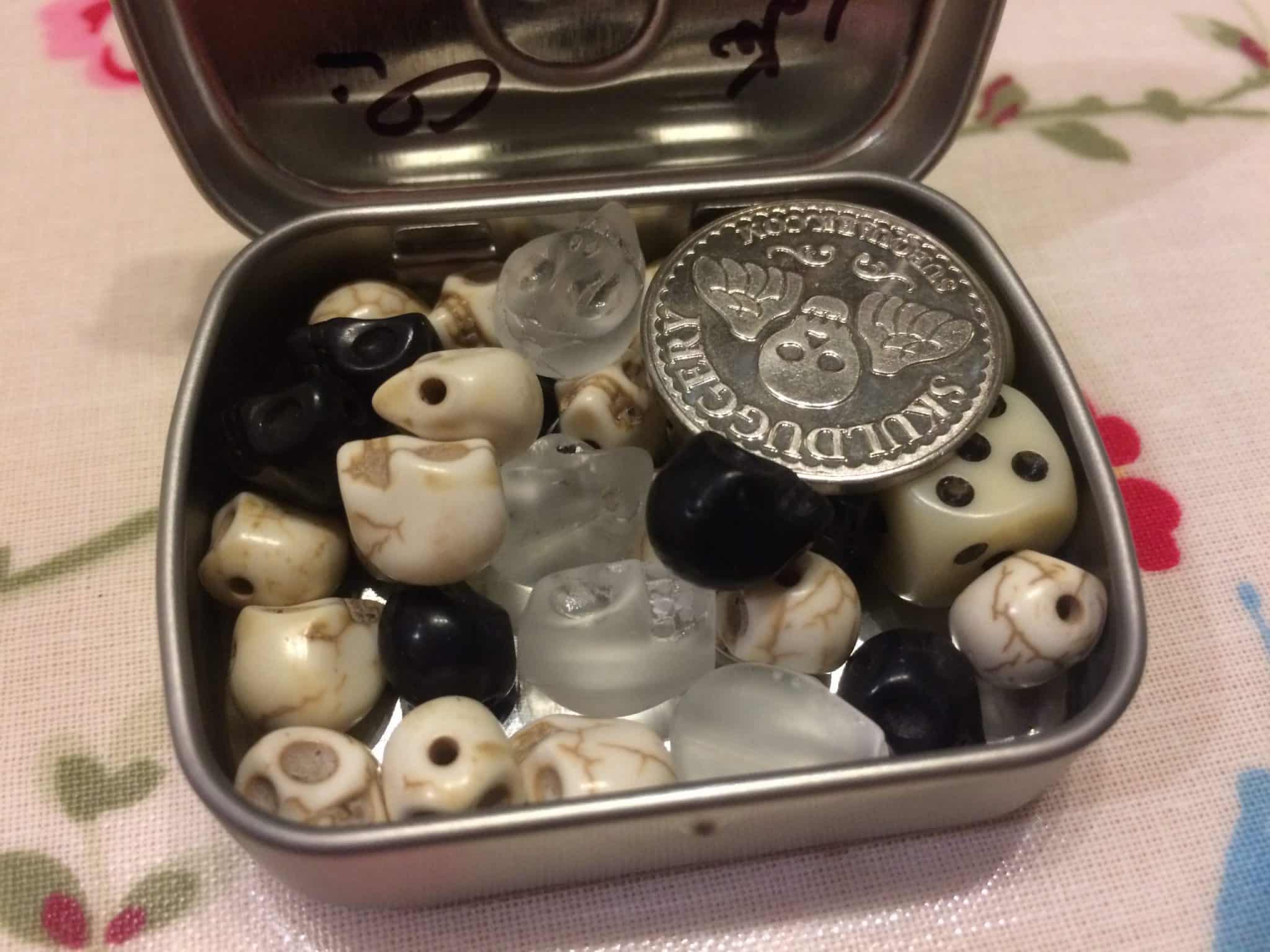 The gameplay is pretty simple, but great fun. You basically take turns rolling three, small, six sided dice, and whenever one or more show the “spirit number”, which was decided at the start of the game, you get a number of skull tokens: one token, for one spirit number, five for two spirit numbers and ten for three spirit numbers. The aim is to get exactly fifteen tokens, and if you go over, you bust.
There are also crystal skulls in the game, which allow you to “shatter” a dice showing a spirit number. Your instinct might be to shatter your opponent’s dice, slowing them down, but as you play you realize that the crystal skulls are much more useful shattering your own dice, preventing you from busting as your skulls reach the magic goal of fifteen. After all, you only have one crystal skull at your disposal, and you only get it back if you roll three of a kind, which means you have to use it wisely.
If anyone rolls three of a kind, and depending on what they are, there is also the risk that everyone has to pass their skulls to the player on their left. There is a custom metal coin that works as a sort of timer. The first time the coin comes out, you’re still fine, but the second time it’s needed, you may lose your hard rolled skulls to the player on your left. So rolling triples when you are behind could benefit you.
There are a couple more rules, but even so the rules are really light and there is a lot of luck involved. The game is all about having fun with dice and being able to be played anywhere. It’s footprint, complexity and game length are ideal for playing it in pubs, restaurants, trains, planes, at airports and virtually anywhere where you have a small amount of space.
There is also a solo variant, which I haven’t tried yet, but it is great that there is the option, because for the same reasons that allow you to play this game anywhere with 2-4 people, you can also play the game by yourself. If you’re stuck on a long haul flight, then playing Mint Tin Mini Skulduggery will help you while away some time.
The components are absolutely beautiful. There are plenty of white skulls, which represent one point, black skulls representing five points, four crystal skulls to allow for four players, three small dice and a custom metal coin. The skulls are beads, but suit the theme perfectly. The mint tin was hand embossed by David Miller and inside you find Kate’s and David’s hand written signatures. So there is a lot of love and passion that has gone into making this game, which makes it even more special.
Of course, if you don’t like dice rolling games, then Mint Tin Mini Skulduggery isn’t for you, but to me it’s a really fun game which I will have with me at all time. It’s yet another game that will come on holiday with us, and I’m sure we’ll play it a lot while waiting for our food, or when we’re out and about having a picnic.
The game was released via Kickstarter, but is due to be available generally in May 2019, so have a look on the subQuark website, because I think it’s definitely worth buying.
Just let me finish by saying that David Miller is one of my Patreon supporters, but this has not influenced my view of the game. He never asked me to make a review of the game or otherwise support it in any way. I backed the Kickstarter campaign because I liked the look of the game, so I feel my opinion is completely my own, but I thought I’d let you know, so that you can make up your own mind.
If you think this article is worth a coffee, please check out my Ko-Fi page at https://ko-fi.com/tabletopgamesblog. I’ll post a photo of the drink I bought on my Twitter feed so you can share it with your friends.
If you like this blog, my videos, podcasts or my support for the community, please also consider supporting me on Patreon. Even the smallest pledge is highly appreciated and allows me to create more content more professionally: https://www.patreon.com/tabletopgamesblog 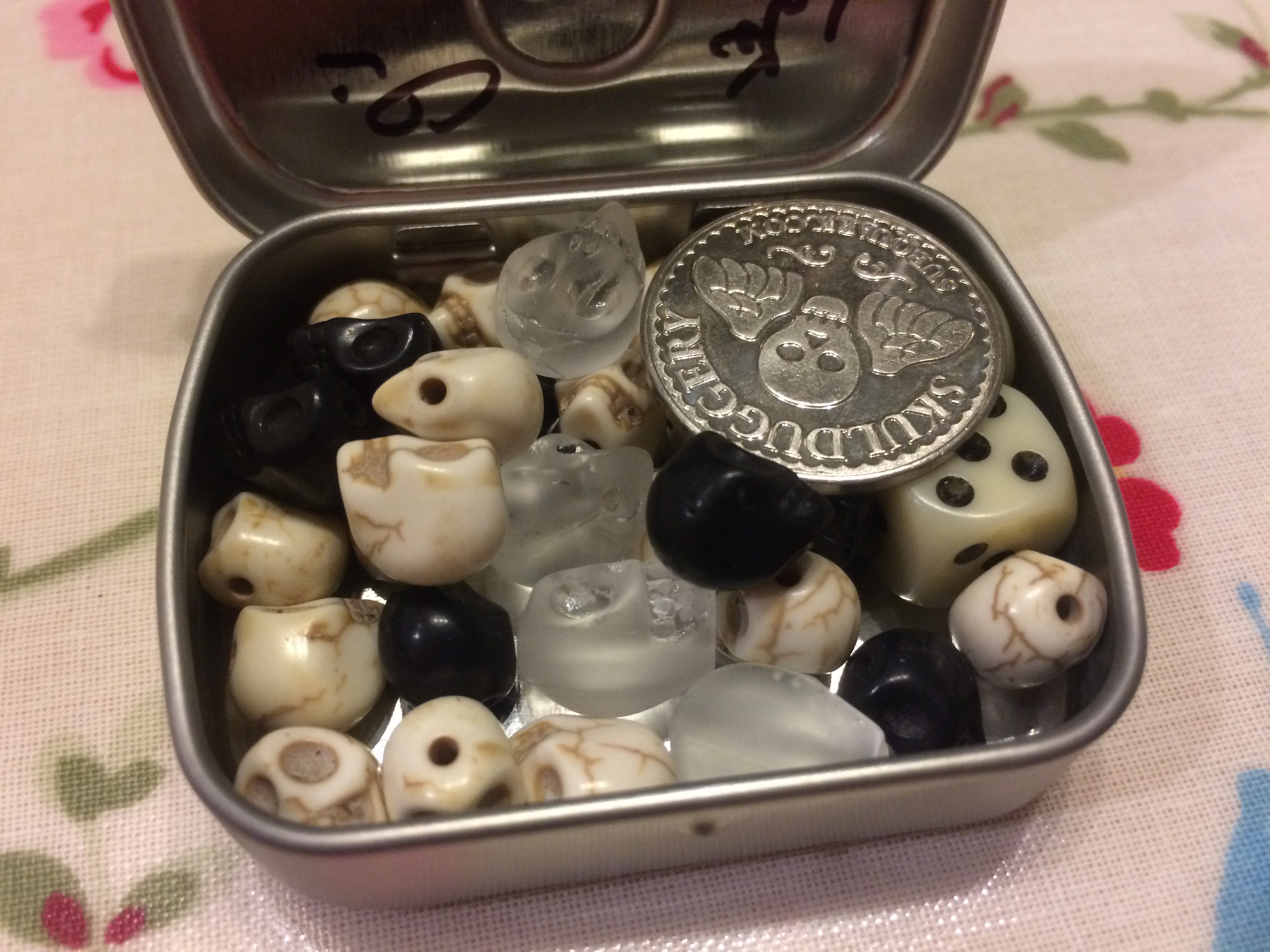