A small queue of customers was waiting outside. It was our opening day. We had our tea ready and some bits in our pantry, but still had to buy the flavours, which we wanted to get fresh from the market during the day, so that every tea would taste fresh and our customers would be happy. Everyone was nervous, but there was nothing for it – we had top open up and start serving Chai by Steeped Games. 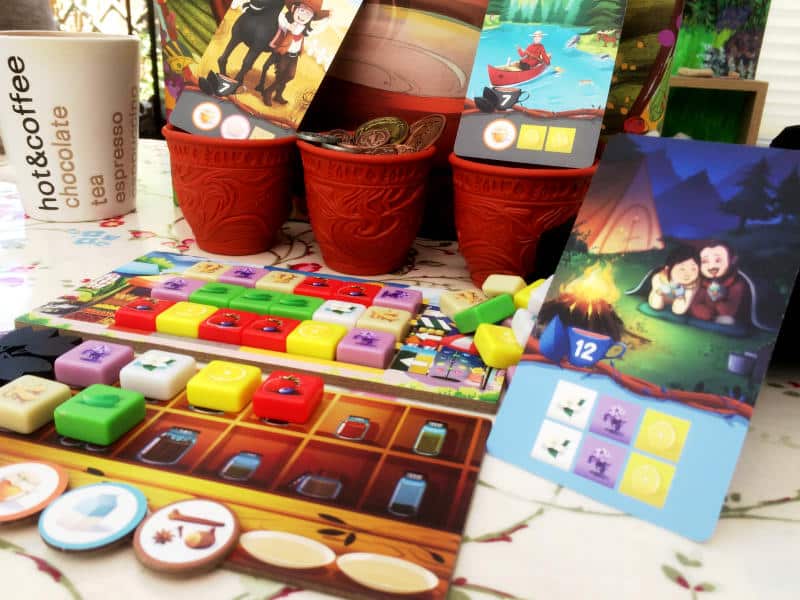 I reviewed the game a year and a half ago now, based on a print-and-play version, which my wife and I used to playtest the game (our names are on the Chai box), but now I have the final copy in my hand and played it again a few more times, with slightly tweaked rules. So let’s see if my opinion of the game has changed in any way.

First of all, I backed the Kickstarter at the deluxe level, so the components I received are luxurious indeed. Please see my unboxing video for more details, but in short, you get metal coins, which I always love, GameTrayz inserts to store many of your tokens, a metal first player token, which is nice but not necessary in my view, and a number of extra cards, which give you more variability, which is always welcome.

After sorting out the components and setting up the game, my wife and I took a little while to remind ourselves how it all worked. I must say, the rulebook was really helpful, but I got a bit confused because the deluxe edition contains extra tokens and cards, which the rulebook doesn’t mention, so I wasn’t sure what to do with them.

However, with that behind us, my wife and I quickly got back into the gameplay and after a couple of rounds, everything flowed really nicely. I was quickly reminded why I backed Chai in the first place – it was the market mechanism. That’s what made the game so interesting for me and made it stand out from other games of a similar type.

Getting resources to complete objectives by selecting actions and taking advantage of bonus actions has been done so many times in the past. Yet, Chai was the first game that I came across at the time that has a special way of how you acquire resources, or to be more precise, the flavours – and I’ve not seen this mechanism since.

It’s a bit hard to describe, but the market consist of four rows with six randomly selected flavour tiles, which are wonderfully chunky plastic tiles, that make a satisfying clattering sound as you mix them in their cloth bag, and which come in six different colours, each with their relevant artwork not purely printed on, but somehow fused to the tile for extra durability, representing the six different flavours you may need in the game.

As you buy flavours, the gaps created are filled by sliding the remaining tiles in that row to the left, which may create “clumps” of the same flavour tiles adjacent horizontally or vertically. When that happens, you buy whole “clumps” of them in one action, which means you’re getting more for your money and you’re also able to complete your customers’ orders, the objectives in the game, more quickly.

You do really have to think about the order in which you buy your ingredients to ensure you purchase them in the most efficient way possible, but without leaving the next player a large clot of flavours they need. To me, it’s the market that really makes Chai shine.

The rest of the game is pretty much the sort of thing you’ll have seen before, but it all becomes secondary, because your focus is on the market. In a way, it’s a shame that the pantry, which is another place to get ingredients that some of your customers want, doesn’t work in very much the same way as the market. I think it would have been amazing to see this mechanism used more in the game.

Overall, the game really has a stunning table presence, and the deluxe components take that one notch higher. The chunky tiles are amazing, the dual-layer market board means the flavour tiles easily slide along, without going everywhere, all cardboard components are really thick and varnished in some way to make them really durable, plus the highly detailed plastic cups for the customers’ tips just look beautiful. The illustrations everywhere are also really gorgeous and there are a lot of board game cameos everywhere, that you want to keep an eye out for.

It is a real pleasure to play Chai and an almost relaxing affair, if it wasn’t for the market which makes you stew over your choices for a while. There is enough variability in the game to keep you busy for some time, especially the always shifting market. There is also a co-operative and a solo mode for Chai, which will be worth trying out.

As you can tell, my opinion of Chai hasn’t changed – or only in so far that I love the deluxe edition even more than the print-and-play. So I will not take back my original review and instead even more strongly recommend you give Chai a go yourself.